Mutating a Parasite to Death 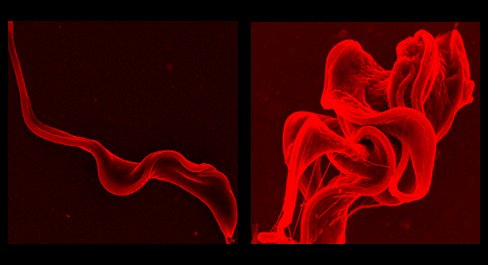 A normal T. brucei parasite (left) mutates after being exposed to rapamycin (right). Scientists might be able
to use this mechanism to treat African sleeping sickness. [Credit: Antonio Barquilla]

Through a microscope, Miguel Navarro saw the single-celled parasite that he calls “a beautiful organism” grow multiple strangely shaped nuclei and self-destruct. At the time, he wasn’t looking for a better treatment for African sleeping sickness, the disease that kills 50,000 to 70,000 people in sub-Saharan African each year, but his new application of an old drug could be the first step towards finding one.

The drug, called rapamycin, is usually used to prevent transplant patients from rejecting organs by suppressing their immune system
response, or to stunt tumor development by blocking a gene that promotes cell growth. This growth gene exists in the parasite Trypanosoma brucei, which causes the fatal disease endemic to sub-Saharan Africa.

Because T. brucei has the gene that rapamycin blocks, Navarro, an expert parasitologist, and his Ph.D. student Antonio Barquilla thought that the unlikely drug might affect the parasite. It did, but not in the way they expected. T. brucei parasites growing in a Petri dish treated with rapamycin morphed into large, deformed mutants with many nuclei.  The drug forced them to grow out of control, changing their genetic makeup. Then the parasites quickly died.

Although rapamycin might kill T. brucei in infected patients, it would also suppress their immune systems, which could do more harm than good in sick people fighting an infection. Still, the method is promising.

“We were trying to do basic research, we weren’t really doing research to search for drugs,” says Navarro, of the López-Neyra Institute of Parasitology and Biomedicine in Granda, Spain. Somebody else will have to build on his study and refine rapamycin before it could treat humans suffering from African sleeping sickness.

The disease is spread by infected tsetse flies that bite their hosts, transmitting the parasite into the bloodstream. If left untreated, the parasite crosses into the brain fluid and multiplies there, disrupting the sleep cycle by causing drowsiness during the day and insomnia at night.  If the infection in the brain remains untreated, patients enter a comatose state, then die.

Currently, the World Health Organization provides four drugs for free to Africans suffering from sleeping sickness. Unfortunately, most are dangerous—some are even fatal and extremely difficult to administer. While rapamycin is far from being safe or cost effective for widespread treatment, it does not affect growth genes in humans the same way that it does in trypanosomes like the parasite T. brucei.  On the contrary, side effects in human patients using the drug tend to be mild and treatable.

Researchers must now move Navarro’s treatment method out of the Petri dish, says Jayne Raper, a trypanosome expert and assistant professor of medical parasitology at New York University. “I think he did a great study,” she says, “I hope someone else picks up this story and runs a study in animals.”  Researchers would probably look first to lab rats to model T. brucei infection in humans.

Though other scientists would need to modify rapamycin to treat African sleeping sickness, Navarro’s work presents a surprising new method of attacking this deadly parasite: alter its growth gene, and make it mutate itself to death.

Scientist couple united in the fight against malaria.