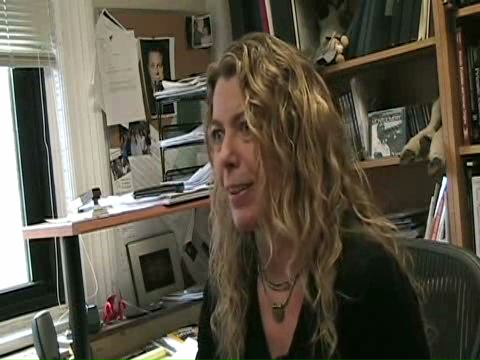 Selecting an upper molar from a pile of teeth on her desk, Shara Bailey holds it up for closer examination. “These are extracted from people; this one has a bone on it you can see,” she says with a dry smile. Bailey sifts through the pile, like a jeweler inspecting diamonds, and grins as she looks over each tooth, pausing only to mention a unique shape or mark and speculate over the tooth’s origin.

The yellow-tinged teeth, though sterile, look fresh from someone’s jaw. Sliding her pen over each of one tooth’s seven cusps – little ridges on top of the tooth – Bailey explains that this topography points to someone from sub-Saharan Africa. As she rummages through her pile, she recites the features of certain teeth like a sports fan recalling the statistics of her favorite players.

“Neanderthal teeth are fun, they’ve got lots of bumps and grooves and extra stuff going on,” says Bailey.

The unique features of fossil teeth are like breadcrumbs on modern man’s trail through time. After leaving Africa around 100,000 years ago, modern man’s dental anatomy has not changed much, says Bailey, a dental anthropologist at New York University. In fact, humans and chimpanzees – two species that diverged around six to eight million years ago – have the same number of teeth: 32. Eight incisors, four canines, eight premolars and 12 molars complete an arsenal of adult chompers. With as little as one tooth – say the upper first molar – she can analyze the ridges, cusps and curvature and pinpoint a tooth’s species with 90 percent certainty.

Teeth provide wonderful clues for anthropology’s mysteries. The presence of a cavity on a tooth, for example, can uncover a person’s diet. Meat-eating Neanderthals did not get cavities, but when modern man switched to a farming society, and sticky carbohydrates like corn became dietary staples, “their teeth went to pot,” says Bailey.

“This is just a haven for bacteria and plaque,” she notes, examining another tooth’s crevices. “This one has a cavity on it,” she says, indicating a small rusty speck at the base of a molar.

Oral hygiene is only one way dental anthropologists study teeth to learn about prehistoric man. Bailey is interested in how random evolutionary changes have altered the structural details of teeth over thousands of years. Cataloging tiny changes in features like cusp number gives anthropologists a guide to match unknown teeth to a specific species and location.

Originally lured to Arizona State University for graduate school to study Native American origins, she quickly spotted a hole in the field. But after attending a symposium on modern human origins, she recalled, “All these famous people came and nobody talked about teeth and I thought, hmm, that would be a good niche.”

Her data hold true for the earliest known modern European teeth, at least 30,000 years old, since they are very similar to the European teeth of today. Neanderthals’ teeth, Bailey found, have certain unique features such as asymmetrical premolars, further supporting the conclusion that Neanderthals are a distinct species.

Despite mounting evidence that Neanderthals and modern humans are separate species, some scientists remain unconvinced and continue to search for evidence of a hybrid – a modern human with Neanderthal DNA. In this contentious field, where long held ideas are not easily swayed, Bailey’s tenacity and rigor are essential to supporting her findings.

“She’s very systematic and thorough,” said Erik Trinkaus, an anthropologist at Washington University in St. Louis, and former Ph.D. advisor of Bailey. When she was in graduate school, Trinkaus recognized her mastery of the field and asked her to discuss teeth on one of his research papers. Their collaborations continue today.

Excavations around the globe request Bailey’s analysis of archeologists’ latest tooth fossils. They rely on her expertise to piece together historical records with sparse data.

“Being able to differentiate at the level that I’ve done, even if you only have teeth, you can definitively say the actual probability of being a Neanderthal,” says Bailey. Laughing she says, “Sometimes people show you a tooth and it’s not human at all.”

Her next project will involve analyzing an overlooked dental anthropological record: baby teeth. Teeth compose a large portion of the fossil record, and in some cases, baby teeth are all that are found at an archeological site, and according to Bailey, they are able to perform the same tests with baby teeth as with adult teeth. Thinking about the possibilities remaining in her field, Bailey gets energized.

“I just think teeth are cool,” says Bailey, wrapping up the teeth on her desk and putting them away for another day’s analysis. “I just think they’re beautiful and shiny and smooth; they’re just fun to look at – once you can get over the gross factor.”

Are “hobbits” a distinct species?

What parasites and bacteria can tell us about evolution.

Very interesting! Never thought about the impact carbs have had on teeth.

This is very true. Well, Teeth have long played an important role in interpreting human evolution.