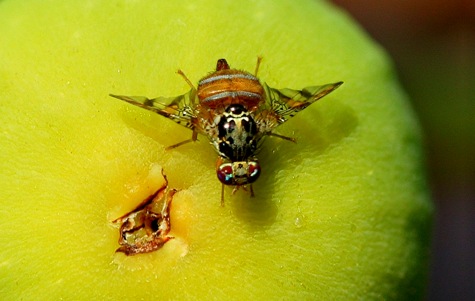 The medfly, shown here, is a huge pest to farmers. Scientists are working to eradicate the insect by
manipulating its genes in the lab to create attractive but sterile males [Credit: ParaScubaSailor, flickr.com].

Is Nutria the New Black?

Reinvigorating the battle against an old disease

When squat, colorful flies began appearing by the dozen around homes in San Diego County, California in November of 2008, the news was not taken lightly. The Mediterranean fruit fly, nicknamed medfly, infests about 250 types of fruits, vegetables and nuts, making it the world’s most pervasive agricultural pest. Even though they were eliminated from the United States and Mexico about 30 years ago, medflies still cross the borders—often in packages from Central America—keeping the California Department of Food and Agriculture in a constant state of surveillance.

To nip San Diego County’s first outbreak in six years, the CDFA has been releasing by plane at least 250,000 sterile male medflies per week over each of the 60 infested square miles (97 square kilometers). The idea is that female medflies in the wild will waste their once-in-a-lifetime shot to mate with one of the unleashed sterile males, thus taking a reproductive dead end.

For decades, countries around the world have been fighting flies with flies, a strategy known as the sterile insect technique. The approach has dramatically reduced the number of medflies and other pests. Tsetse flies that carry the parasite that causes sleeping sickness and screwworms that eat the flesh of livestock have been eradicated in parts of the world. But sterile insect technique is not efficient, demanding swaths of factory-raised males and an approximate $8 million investment for small-scale, maintenance releases per year from the CDFA alone. In a new advance in the ongoing war against medflies, Marc F. Schetelig and his colleagues engineered medflies with special genes that render them sterile. In tests with this strain, they found that they could use fewer sterile males and completely halt reproduction.

“I hate the word ‘100 percent’ because, normally in biology, it doesn’t exist. [But] for this one [strain], I use ‘100 percent’,” says Schetelig. Since the study was published in the journal BMC Biology, Schetelig, a fruit fly geneticist, now at the U.S. Department of Agriculture and Agricultural Research Service Center for Medical, Agricultural and Veterinary Entomology in Gainesville, Florida.

The method of sterilization is the main difference between Schetelig’s strain and the sterile medfly that has been used to curb the pests since they fanned out from Kenya in the first half of the 1900s. In the conventional technique, after the males are culled from the females in factories, they are exposed to gamma rays. Just like in humans, high doses of gamma-radiation causes random genetic changes, or mutations, in every cell, including in their sperm. At the right range of radiation, the flies get sterilized but remain healthy enough so that, when they are released, the wild females will mate with them.

But “healthy enough” is not the same thing as healthy, and nobody recognizes this fact better than healthy, wild females. Mating in fruit flies is a “female choice-driven system,” points out Todd Shelly of the U.S. Department of Agriculture at the University of Honolulu in Hawaii. Because females seem to sense the difference—though scientists are not sure exactly how—the sterile insect technique requires about 100 times more sterile males to outcompete the wild, healthy males.

In contrast, the system by Schetelig and his colleagues forgoes radiation altogether. Instead, they used a transgenic approach, meaning they took genes that are not native to the medfly and inserted them into its DNA. Only when flies are embryos, still developing inside eggs, do their cells recognize the foreign genes as their own genes and use them to make proteins. Then the damage starts as the new, foreign proteins trigger a cascade of events that kills the embryo.

If the system were that simple, however, no sterile transgenic males would ever be reared because they would die before they hatch. Instead, Schetelig’s team introduced a switch-like component in their system. The default for the system is “on.” But if the flies are bred in the presence of the drug tetracycline, as they are in the lab, the death-triggering system is “off.” So lab-raised males can survive and reproduce, but their offspring in the wild that inherited the foreign DNA will die as embryos without the benefit of tetracycline.

Although female medflies that mate with genetically sterilized males still lay eggs in fruit, the eggs do not hatch larvae that eat their way out, and thus do not destroy the fruit. While larvae squirming their way through an orange, for example, turns it into rancid juice, the unsuspecting consumer of citrus bearing unhatched medfly eggs would probably notice no difference. Still, regulations are strict against exporting fruits and vegetables from a medfly-infested area. As Schetelig puts it, a medfly-free seal on them “is nearly as good as ‘Organic.’”

The transgenic strain of flies beat the conventional sterile flies at the ability to woo females. A ratio of only nine sterile transgenic flies to one wild male could cut the number of offspring down by more than 99 percent, compared to the 100 to one ratio needed for the conventional sterile system. The researchers hope this increase in efficiency will mean a 10-fold reduction in the costs associated with sterile insect technique.

The transgenic system has so far only been evaluated in lab and small-scale field tests. At least in these settings, Schetelig believes the improved mating fitness is due to the fact that the medflies are not irradiated.

Although Shelly, the fruitfly researcher in Honolulu, says that Schetelig’s flies could be more “sexy” to females than irradiated males, he believes that the inefficiency of the sterile technique is due more to the fact that the medflies are reared in unnatural environments. He says that, “Despite all these years of rearing flies, you cannot get around the fact that you are producing a manmade, factory fly.” He actually advocates for holding the flies in the factories for one or two days longer before releasing them to allow them to become more mature and robust.

Advances to the sterile insect technique may help Central American countries that, unlike Mexico, have not eliminated medflies. Jorge Hendrichs, head of the Insect Pest Control Section at the International Atomic Energy Agency that helps countries adopt the conventional technique, calls the Schetelig study a “good stepping stone.” Still, he cautions against the commercial use of a transgenic fly. Although unlikely, the foreign DNA could randomly change and become less effective at killing embryos.

Schetelig hopes that the transgenic system for medflies will reap commercial benefit after more testing and tweaking, which he estimates could take between two and five years. But he is perhaps even more excited about adapting the genes to work in other pests. For example, the gypsy moth, which devours the leaves of many deciduous trees, is too sensitive to gamma rays to be sterilized by the conventional route, opening the possibility for a genetics-based sterile system. Says Schetelig: “For other species, I see a big advantage if such systems are developed.”

How do fruit flies decide between hunger and comfort?