Could prions, the proteins that cause diseases like Mad Cow, also be crucial to normal brain functioning? 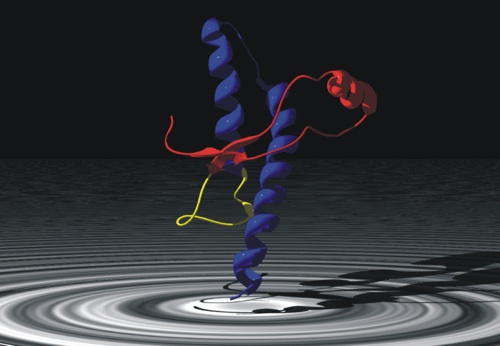 Illustration of a normal human protein in the process of becoming a prion. The red and yellow regions are the first to become mangled, or misfolded. [Credit: Cornu, Wikimedia Commons]

Although you may not know it, your brain is full of prions — the proteins that cause brain disorders like Mad Cow Disease. But they are only a threat when they are misfolded, like a kinked paper fan. Scientists have long known that these misshapen prions can destroy the victim’s ability to think and move, but recently, they have learned that all brains — even healthy ones — contain so-called “normal” prions. A wide variety of organisms, from humans to mice to yeast, produce these proteins. Only now, though, are scientists beginning to understand why these normal prions are so commonly manufactured by so many living things.

In fact, a growing body of research suggests that harmful prions are the black sheep of a protein family that actually benefits the body. They prevent brain damage during a stroke, for example, and they enhance our sense of smell. By studying prions, scientists are gaining new insight into how the brain functions and how its cells communicate with each other.

“It’s a big breakthrough that [normal prions] definitely have a function that is important for life,” says Edward Málaga-Trillo, a prion researcher at the University of Kostanz in Germany. “This takes us closer to understanding what goes wrong when [the prions’] proper function is not there,” such as in prion diseases like Creutzfeldt-Jacobs Disease. “And if we understand that, we can do something about it,” he says.

Prions were first isolated in 1984 by researcher Stanley B. Prusiner of the University of California, San Francisco. Prusiner christened them “prions,” borrowing the “pr” from “proteins” and the “ions” from the infections they cause. Prions’ simplicity makes them unique among infectious agents. Viruses and bacteria, the most common causes of disease, contain their own genetic material, which is necessary for the microbe to invade and attack the body’s cells. Prions, on the other hand, are devoid of DNA, and they don’t enter cells. Instead, they inflict damage by sitting outside of the thin membranes that cover brain cells, causing disease when they misfold the surrounding proteins like a toddler playing with a Rubik’s Cube. Examining a brain infected by these deleterious prions reveals a Swiss cheese-like pattern that results when some brain cells die, and the remaining ones clump together.

Because normal prions are produced in such diverse organisms and have persisted for thousands of years, many biologists suppose that prions serve an important purpose in the body. Yet mysteriously, mice engineered to not produce prions appear almost completely normal. One major difference is that the prion-free mice can’t become infected with a prion disease because they have no naturally occurring prions that can become misshapen; prions can only infect other prions. For the most part, however, the roles normal prions play in the body remain a puzzle to researchers. “What are we doing with a gene for a protein whose only function seems to be to give you a disease?” says Stuart Firestein, a scientist at Columbia University who researched prions’ role in a mouse’s sense of smell.

It’s unlikely that a trait that only causes destruction would have survived generations of genetic weeding, biologists reason. “Evolution is pretty good about selecting against the things that are detrimental,” says Irina Derkatch, a prion researcher at New York University. This mystery has spurred research that links these natural prions to a myriad of functions, from brain cell communication to helping to protect the brain against damage during a stroke.

A recent study provided the first definitive evidence that normal prions are necessary for an animal to function normally, showing that they are crucial for the development of an embryo. It was published in March 2009 by researchers at the University of Kostanz in Germany, in the journal of the Public Library of Science.

In the study, scientists halted the formation of normal prions in zebrafish embryos, which normally consist of a tightly packed glob of cells that grows as the cells divide and multiply, eventually giving rise to a full-grown fish. Without normal prions, however, the embryos disintegrated like a paper towel in a bowl of water. The fish were arrested in the pre-natal stage of development and never grew into adult fish. Prions, the paper’s authors concluded, act as an adhesive between cells in the embryo. Without these proteins, the cells simply fall apart.

“Normally you have cells forming a layer; they all pile up very nicely. But these cells were losing contact,” says Málaga-Trillo, the prion researcher at the University of Kostanz, who co-authored the study. Málaga-Trillo’s research shows that normal prions facilitate the glue-like stickiness between cells by enabling them to communicate with each other, he says.

Prions are the Enron of the NIH and the TSE labs
Have you read Dr. Frank Bastian’s,(the foremost authority on CJD) research on CJD. He implicates and certainly proves to the satisfaction
of anyone who will listen that the main culprit
behind all TSE infection, including Alzheimer’s,
is the spiroplasma bacteria. Please carefully investigate his claims.

I think you also might investigate how the majority of respected scientists arrived
at conclusions that ignore basic biology and the rules of evidence.
The prion will soon become known for the joke that it is
(Stan said PRION sounded good, a great name!). But what about all those folks who might have been helped if science had been chosen over self serving politics and incompetence.

I’m an independent researcher and reporter
and have covered TSE diseases and other related diseases
(Chinese Mitten Crabs and spiroplasma)
for twelve years and have come to the conclusion
that all the so-called “prion” diseases are caused by an infection with cell wall deficient bacteria, mainly spiroplasma.

The most important and most knowledgeable researcher on TSE and spiroplasma is Dr. Frank Bastian. The case against his elegant research connecting TSE to spiroplasma infection
is superficial and flimsy.

I’m only interested in the truth about this serious disease (which I suspect includes Alzheimer’s).
The prion theory is a red herring. TSE have the potential to cause great harm and suffering if we don’t begin to understand them better than we do now.

Wow, this is fascinating stuff! I’ve read many studies about prions in recent weeks and its exciting to think about what will be learned about these proteins that have been around forever.