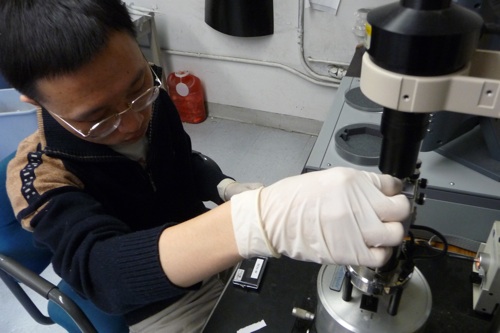 The world’s smallest assembly lines may soon be made of DNA strands. Model versions are already at work in Ned Seeman’s cluttered laboratory at New York University, where chemists have “programmed” DNA arms to grab and pass a gold particle between them.

A team of researchers created platforms that fold and assemble themselves, each mounted with movable arms made entirely of DNA strands. The results, published last February in Nature Nanotechnology, represent the latest advances in DNA nanotechnology and may be the precursors to DNA-based computer chips and self-assembling drug factories. But for now, the prototypes of that sleek future are scrutinized under an atomic force microscope on the eroding floor tiles of a lab littered with lopsided models of wire and plastic tubes.

To picture how it works, you have to forget what you know about DNA’s role in cell biology and consider it from a chemist’s perspective. Imagine the familiar double helix untwisted, so it becomes a ladder with rails of sugars and phosphates and rungs of paired bases. The DNA strand has four bases that are finicky and will only link to one partner — guanine with cytosine, adenine with thymine. If you split the ladder down the middle, opening it like a zipper, you are left with two rails, each studded with bases that will stick to the bases on another rail, but only if they are the right kind. That degree of pickiness set Seeman’s cogs in motion nearly 20 years ago, when he realized they could be spliced together in specific ways. By mixing the right strands together, he thought, DNA strands can be “programmed” to assemble themselves into shapes and even machines.

Seeman is regarded as the father of DNA nanotechnology. He cuts an imposing figure with a formidable gray beard and hair halfway to his shoulders, and he is brusque when obliged to discuss his work with the layman.

If all you had were ladders, he explains, you could only link them into lines. Fortunately, there is a time when DNA takes a different shape: when it copies itself for reproduction. Momentarily, the double helix unzips forming a structure that resembles a crossroads, called a Holliday junction. Since Seeman uses them as building materials, and not the biological blueprints they usually are, he stabilizes the strands right after they unzip, yielding cross-shaped DNA with four “sticky ends” for construction. He pioneered the trick, and he has since created such junctions with many arms, rather than just four.

Hongzhou Gu is a young chemist in Seeman’s lab who is leading the nano-assembly-line research. To describe DNA arms, he casts around the lab’s paper-strewn desks and settles on staplers. An arm, represented by a stapler, gloms onto the gold particle in a process called DNA conjugation. Then, through precise washes with new solutions of DNA strands, it turns and passes its cargo down the line from arm to arm. He has also created a “walker” – a triangle of DNA strands that ambles along the platform past the arms hauling along a flea’s fortune in gold.

Gu, who led the research on the nano assembly line, says that machines of programmable DNA may be hard to imagine at first; he had not considered using DNA as a construction material before he heard of Seeman’s work. “It’s a pretty new area,” he says.

In a nod to the Japanese cultural scene, folding DNA into flat figures is called origami. Caltech chemist Paul Rothemund invented the technique and famously (in some circles) showed it off when he contorted thousands of DNA strands into a pair of smiley faces. Gu applies DNA origami to his rudimentary assembly line. He folds DNA strands into platforms that support the gold-grasping DNA arms. Rothemund compares Gu’s assembly lines to pegboards on which tools are hung, each fitted with multipurpose pliers, like a nano-sized Leatherman, that can be changed as needed.

“What they have done is create a reconfigurable jig at relatively low cost, so that different structures can be made from the same parts,” Rothemund says. The parts can be broken down and reassembled into new shapes for different jobs, thus offsetting the high cost of individual DNA machines.

Though the allure of puzzle-solving is enough to motivate Gu, his work hints at a future of practical, microscopic robotics. Future DNA machines could push molecules together to automatically manufacture drugs using the basic principle of the gold-particle-passing assembly lines — though the difference might be like that between a circuit board printer and a blacksmith’s hammer. Someday DNA could also be persuaded to assemble itself into computing devices — impossibly tiny chips that can transform from one specialized component into another.

In fact, experts say that new branches of technology could spring from the kind of work going on now in Seeman’s lab. The first useful inventions in the still-rudimentary fields of nanoelectronics and nanomedicine are on the horizon, says Chengde Mao, an analytical chemist at Purdue University. However, he cautions, it is folly to try to predict which of the tiny things imaginable might become a practical tool.

“They are pretty open questions and depend on how we define ‘practical,'” Mao says. “It is not that hard to demonstrate an application in the lab, but it is much harder to bring to the market.”

To describe the applications, Seeman uses the temporal reference of the Watson-Crick centennial: 2053, the 100th anniversary of James Watson and Francis Crick’s discovery of the structure of the DNA molecule. By then, he says, “I expect that fairly complex programmed DNA-based nanorobotics will have been achieved. I expect it will be applied in every field, from medicine to the basic sciences to engineering.”

Before the technology steps into such a privileged station, however, it is maturing in a humble adolescence. From the outside, the lab’s daily pace of technological advancement is plodding: Gu’s first success was to build platforms bearing two arms; now he is working on adding a third. He may be whisking us off toward a bright future, but the daily slog is banal. One afternoon in the lab, for example, Gu pored over yet another blurred printout from the microscope and said the gold particle didn’t look round like it did the day before. But only less than a decade ago Seeman had identified the third dimension as the next big hurdle in DNA nanotechnology. Now it is cleared and he is envisioning practical machines set to work within his lifetime.

Researchers make assembly lines out of DNA. This is DNA nanotechnology overview, with an interview with Ned Seeman, who pioneered the field