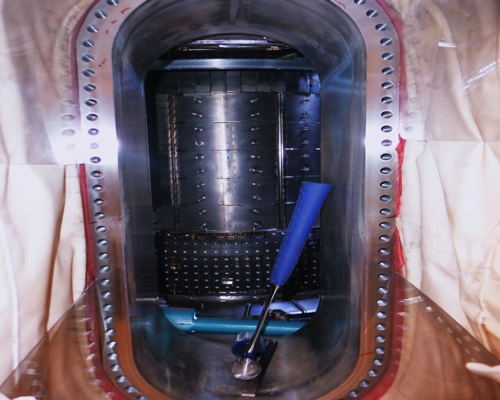 Fusion, a work in progress: This snap shot through the portal of MIT's tokamak fusion reactor shows the metallic core at the center of its donut-shaped cavity. At the time the photo was taken, the machine was under repair. [Credit: Robert Goodier]

There is a nondescript alley on the fringe of MIT’s campus in Cambridge, Mass. — a street hemmed on both sides by mismatched brick buildings. Except for white letters on a glass door, everything is average; there is a bar on the corner with a name that is easy to forget, and there is even drizzle on a northeastern spring afternoon. Then the alley takes a strange turn as if onto the set of a Star Trek episode. The door reads: Plasma Science and Fusion Center. Through the door sprawls a control room outfitted with banks of Dell screens. The LCD landscape is freckled with yellowing cathode ray tube monitors, relics still trudging through missions that began more than a decade ago. This is the anteroom. Beyond concrete bay doors squats a magnetic fusion reactor.

This reactor is a tokamak model. It’s a cylinder that stands as high as two men, capped at both ends by steel plates each nearly a yard thick, and clamped together by 96 massive bolts, each a yard long and six inches in diameter. In the folklore of fun facts supplied for fusion reactor tours someone figured that one or two of those bolts could anchor a rocket to the ground as it tries to launch. The bolts squelch down the powerful magnets inside, keeping them from repelling each other and ripping the machine apart from its mechanical innards outward. The magnets, in turn, contain a thin plasma rotating around a cavity inside. The plasma is heated to a million degrees Celsius, nearly seven times the temperature of the sun’s core. And like the sun, atoms in the plasma are stripped of their parts and crash together, fusing into new elements and releasing torrents of energy with each collision.

Between the tokamak at its heart and the walls encasing it, the chamber is a free range of servers, cords, a raised platform, steel staircases, soaring ceiling and empty space. It is as if clenching the magnets together and binding the plasma inside the cylinder had exhausted the will of architects to use walls and define enclosures elsewhere in the chamber. In that juxtaposed position, the tokamak represents both the starry-eyed dream of a clean energy utopia and the expensive and dirty path to get there. It is a technology that promises inexhaustible power: the power of the sun tapped through a plasma cloud. If only we can get it to work.

Fusion’s technorati — the physicists and engineers who dedicate their careers or at least a few years to their belief in cheap energy — has schismed. The two main camps are magnetic and laser, flanked by splinter sects pushing other technologies. Fusion reactions have never been achieved for more than a few seconds, and it is doubtful that any has produced more energy than was needed to start the reaction. To become practical, a future fusion generator would have to work not just for mere seconds, but for days and months at a time.

A cascade of advances in the last decade and two massive new reactors hint at a breakthrough. One of the reactors is a baby of the U.S. government, dedicated to laser fusion and slated to begin experimentation in California next year. The other, ITER, is a massive magnetic fusion reactor under construction in France. It is paid for by an international coalition of governments willing to front billions for the dream of cheap power. Unfortunately, those well-funded projects and indeed the entire field of fusion is plagued by technical hitches that threaten its very viability as a power source. Compounding the problems, funding for experiments is erratic and there is already outcry over the possibility of radioactive contamination.

Sun power and the creation of elements

To contemplate the hurdles on the track to fusion power plants and the rosy glow at the finish line, we need to return to the starting blocks. At its heart, the idea to harness the power of fusion is one of the legions of experimental children that sprang from Albert Einstein’s famous equation — energy equals mass times the speed of light squared. Sometime after Einstein muttered those words, scientists realized that matter could be transformed into energy. They simply had to smash some atoms together, hope that they fused and then collect the parts that shot out of the explosion.

Not all atoms will work — only the ones with the lightest cores. Lightweight atoms are tightly bound; the protons and neutrons in their nuclei are loyal allies that don’t break apart easily. Heavy atoms, on the other hand, are more like sluggish confederations of particles loosely bound in an agreement to stay together until something better comes along. Those are best for nuclear fission, the splitting of an atom, since they split up easily. Nuclear power plant fuel — uranium and plutonium — are at the heaviest end of the scale.

With that in mind, experimental fusion reactors use two versions of the lightest element, hydrogen: its nucleus has only one proton. The versions are deuterium, which is hydrogen with a neutron stuck to its proton, and tritium, which is hydrogen with two neutrons. Smaller reactors like MIT’s may only use deuterium, since it is not as radioactive as tritium and safer to work with. Using tritium and deuterium together, however, has produced the most fusion energy seen in reactors thus far.

Deuterium and tritium rarely fuse. Even if you were to fire these atoms at each other in a particle accelerator, most of them would careen off each other. They would fuse only one in 100 times, says Martin Greenwald, a senior researcher at MIT. You need to smash a lot of atoms together often if only one in 100 react. Atoms, like bumper cars, bump more when they’re confined in a small space, and they’ll bump even more as they speed up — that is to say, as they are heated. In fusion reactors, and in stars, atoms are pressed together, giving them the energy and the opportunity they need to fuse.

“You have to hold this very energetic stuff and let them bounce off each other, let them collide many times,” Greenwald says.

When deuterium fuses with tritium, the protons, one in each nucleus, latch on to one another and undergo a kind of alchemy — they transform from one element to another, creating a helium atom from two hydrogen atoms. Deuterium and tritium have three neutrons between them; two of those neutrons join the protons, the third neutron is jettisoned away with explosive speed. Fusion’s power is in that spare neutron. It is super-charged with a conversion of mass to energy.

Fusion plants of the future will have to collect the energy of those flying, leftover neutrons. The plant can’t allow them to fly off and escape, so it will catch them in a kind of blanket. The blanket heats up as each neutron slams into it and the heat ultimately boils water to turn conventional steam-powered turbines.

This is a semi-informed piece about fusion !
The truth about the National Ignition Facility is that it is a dual purpose facility. It enables “stewardship” of the nuclear stockpile (thus allowing conformity with the international nuclear test ban treaty) and it was also built to prove that fusion can be triggered with large lasers. Whoever tells you otherwise has another agenda, and that’s about concern over threats to research funding.
NIF will soon prove that fusion can be triggered by lasers in a deuterium/tritium fuel pellet, but it was never intended to go straight from there to producing a continuous energy supply. That is the job of another international project which you didn’t even mention… HiPER (try Googling that) will develop from NIF’s proof of principle to create a demonstrator reactor which can run “fast ignition” laser fusion on a continuous basis.
AS usual the scientists who feel their precious funding is most threatened by the fast-advancing laser technologies are doing all they can to tell the world that it will never work, but the fact is that laser fusion has come further since lasers were invented than “tokamak” fusion has in the entire half-century since it was first attempted, and lasers are nearing the point where they will deliver.
That’s not to say that we shouldn’t be pursuing both laser and magnetic fusion goals… we absolutely have to ! Today the press are starting to pick up on the possibility of power outages in the next few years, as the nuclear fission plants run down and shortages of fossil-fuel generatd power become unavoidable at peak times.
The bottom line is that renewables will never come close to meeting our huge demands for energy, so we’d best get on with cracking the fusion challenge… and stop the scientists scrapping among themselves … This is about something much more important than who gets the next piece of funding, and some scientists really need to wake up to that !