Neuroscientists at New York University study longtime meditators to glean insight into how our brains work. 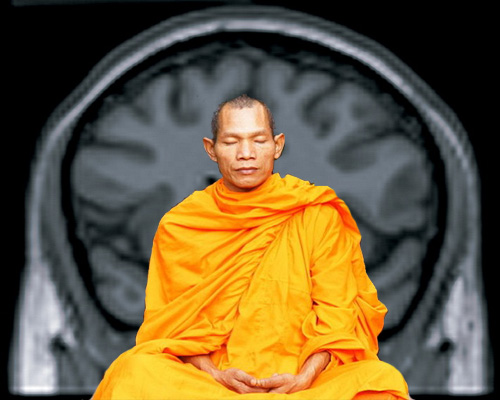 Far from the proverbial mountain top or a quiet shrine, one group of meditators is attempting the ancient practice inside a brain-scanning machine. It is as narrow as a coffin, and they lie inside with foam cubes packed around their heads so that they don’t shift. And even though they wear ear buds to block out noise from the machine, the steady thumping seems to set the mood more for disco dancing than meditating.

This is the unnatural setting in which Zoran Josipovic and David Heeger at New York University have been scanning monks and secular meditators with functional magnetic resonance imaging — or fMRI. The fMRI machine allows the scientists to track the monks’ brain activity based on blood flow as they try to enter a meditative state. The researchers are interested in a special type of meditation in which the practitioners access a subtle self-reflexive awareness that is free of dualities such as those of self vs. other and internal vs. external, explains Josipovic, who is a Tibetan Buddhist as well as research associate in Heeger’s neuroscience lab. Since 2008, the pair has been working to identify if there is a pattern of brain activity that accompanies the experience of “oneness.”

What they find could help illuminate poorly understood brain disorders such as stress, depression and even Alzheimer’s and autism. These diseases are very different from each other, but they share a common feature: In those afflicted, brain scans reveal strange behavior in the same region of the brain. Josipovic and Heeger believe this part of the brain is associated with internal thoughts, a poorly understood area referred to as the “default network.” It is called default because it seems to activate when people are not doing any particular task.

Average people are conscious of either the external world or their personal world, and they alternate their attention between the two. These worlds push us into and pull us out of our awareness. Imagine how concentrating on a situation in the present, like listening to a friend’s story or solving a math problem, can make you less self-aware — that is the pull of the external world. But then a lapse of focus creeps in, and you begin to wonder if you missed your doctor’s appointment this morning, or what you want to do on vacation next week — and you have felt the push into your inner world.

To learn about this mysterious network, they are probing the brains of people who practice a type of meditation called nondualism. Unlike common meditation approaches, such as focusing on an external or imaginary object for a prolonged stretch of time, nondualism trains meditators to watch their own minds while they remain fully aware of their surroundings. In nondual meditation, practitioners are cognizant of awareness which is both the nature of mind and the context of internal and external experiences. “What I think is important here is the use of trained meditators to get at a subjective mental state,” Heeger explains. Because these meditators can control whether they are reflecting on themselves or on external issues, or on both, they can describe their experiences to the researchers after their fMRI. If they achieved a sense of “oneness,” the researchers can look to see if the machine recorded any unique brain activity that could be associated with this mental state.

Stumbling upon the brain’s “resting” network

Dr. Marcus Raichle, a neurologist at the Washington University School of Medicine in St. Louis, Mo, served up the game-changing idea of the default network in 2001 in a study he published in Proceedings of the National Academy of Sciences. By scanning the brains of control subjects who were awake but had no task to do, he noticed areas of the brain that crackled with activity, which he dubbed the default network. His critics rushed to point out that his taskless subjects could be thinking about anything during the scan but, to Raichle, it was exciting just to discover that there was an area of the brain that waxed as the external network’s waned.

Experiments in the laboratory of Rafael Malach, a neurobiologist at the Weizmann Institute of Science in Israel, first raised the suspicion that the default network did more than oppose the external network, that it might control self-related thoughts. Malach’s team made the surprising discovery that people’s brains responded in identical ways to certain dramatic scenes in films such as “The Good, the Bad, and the Ugly” and movies by Alfred Hitchcock. But, during other parts of the movies, each viewer had his or her own pattern of brain activity. Malach believes that, during less intense scenes, with less gunshots and bloodshed, people began comparing the action to their own personal experiences, letting their thoughts turn inward. Their brain activity spiked upward in the areas known then as the default network. Now, five years after this “neurocinematics” study, which was published in Science in 2004, Malach says that, “We are [still] very much in the dark about this system.”

FMRI-based experiments usually monitor the brain activity of subjects as they respond to stimuli, whereas the default network tends to activate in the absence of external stimuli. This means that fMRI is an unlikely tool for studying the default network. There are no tests to study the wide range of internal thoughts that could come from this network, such as reflections on the past (do I like the shirt I just bought?), or the future (where will I wear that shirt?) or anticipating other people’s opinions (will my friend think that shirt looks good?). These thoughts often pop into our heads seemingly out of nowhere.

“oneness” isn’t just for monks!
You guys should have a look at holosync by centerpointe.com – Bill Harris has come up with a perfect meditation programme which forces the brain in to meditation.
I’ve been using this for 6 months and although I am only 1/12th through the entite thing, I have already experienced oneness severl times, the most recent was while I was meditating (naturally, without the CDs) during reiki training.
It is something I have integrted into my life and wow does it ever make a difference.
If you want to know more, drop me a mail, I’d be hapy to answer any questions.

After all, the work with Tibetan Monks withe guidance of the Dalai Lama has been going on for over a decade at Wisconsin on Buddhist Meditation. Dr. Newberg’s work at Pitts as well as that of Beauregard at Montreal on different types of meditators are also very well known. What is the newness of the NY group.

Secondly, it is a very strange definition given to Oneness of Advaita as the unification of internal and external brain circuits. Oneness in Advaita is absence of an individuating sense of ‘self’, a zero-thought condition.

What constitutes a Default network too is not uniformly accepted amongst neuroscientists. There are many research papers on this subject.

Trust the Editors would come up with a more thorough paper on this interesting topic of Non-Dualism and neuronal networks.

It’s nice that sience is starting to grasp meditation.
But it tends to lead people away from actually doing the work.
and that is very contrasting to mind usage.
isn’t it?

Meditating on “oneness” is nothing I ever heard about.

And “non-duality” is something completely different.

You need to get your facts straight, not just assuming you know what is being meant here — because you don’t.

The title is right out of a buddhist joke.

How does a buddhist order a hotdog?

“Make me one with everything.”

But it is also not actually how a person meditates.

Still need brains to scan? … I’ve been meditating for a while and i think I’ve reached that kind of level. I’ve certainly gotten somewhere.

I agree with the opening statement of REbecca York (First to comment). Oneness is definitely not just for monks. We could all use a dose of ‘oneness’ from time to time. Meditation is a great way to relax and to visualise that which we want to manifest in our lives. An article which touches on meditation is: Perception is Reality: Meditation, Perception and Creation of Reality.

My name is: Vinko Rajic http://www.vinko-rajic.site11.com/ , Swedish citizen, Croatian before.

I am Telepathic person. I am probably only one person in the world with this kind of telepathy.

I can exchange voice messages with people using telepathy , I can exchange video with other people,
I can exchange smell and bad and good filings with people around, people can move
muscles on my body from distance and much more.
And all messages from me are transmitted to big number of people so I am a Mental Radio :
http://en.wikipedia.org/wiki/Mental_Radio