Are you smarter than a Neanderthal toolmaker? 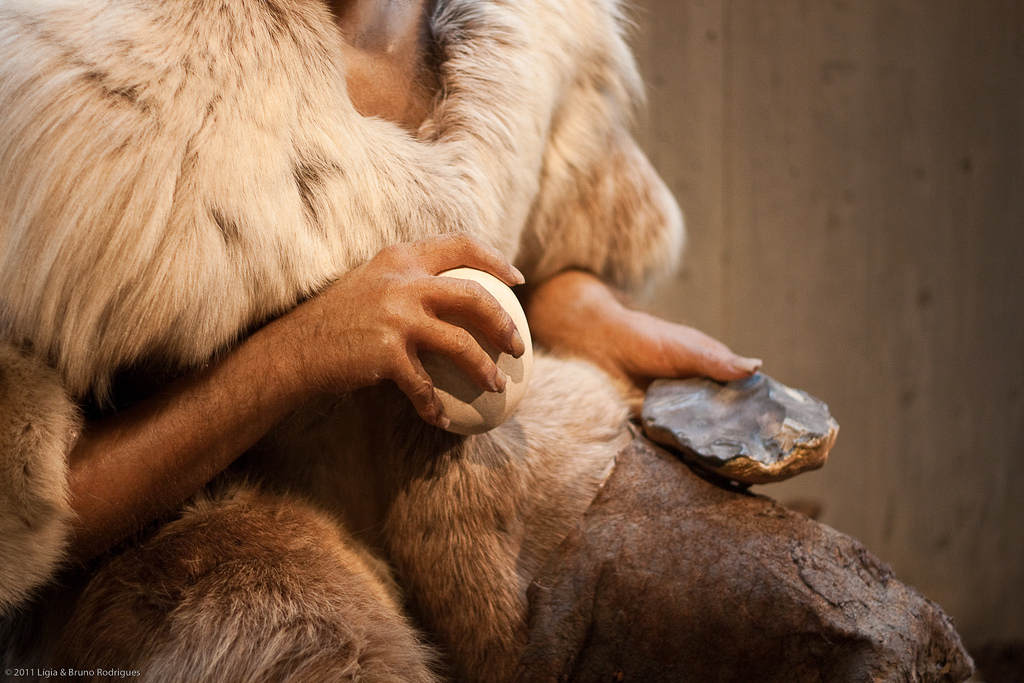 “Someone told me that human beings have been around for only 60 thousand years. This is shorter than I thought. Is this true? Where did we come from?”

The Things They Carried

Could a Neanderthal use a hammer? Maybe. But could he build one himself without imitating humans? The question of whether our close hominid cousins had the ability to innovate new kinds of tools, and not just imitate, is coming up in scientific circles as archaeologists re-evaluate old archaeological sites.

Two recent studies examined the possibility that Neanderthals created a new toolkit in Europe about 30,000 to 40,000 years ago. For the past few decades, most archeologists assumed that Neanderthal stone tools were simple and roughly shaped. But that assumption may be undermined by the discovery at some Neanderthal sites of thinner, more blade-like stones, some with jagged toothed edges, and others that had one sharp edge and a dull, curved back. They were similar to tools favored by humans during the same time period, leading some experts to assume that Neanderthals were heavily influenced by human culture.

Now, some archaeologists are viewing Neanderthals in a more favorable light, casting them as an intellectual match for humans and calling into question the widely-held idea that changes in Neanderthal culture were introduced by Homo sapiens.

The first of the recent studies was set in southern Italy, where researchers examined a group of artifacts known as the Uluzzian culture. For archaeologists, often all that remains of a group of people are the things they leave behind (their material culture), so the ‘Uluzzian culture’ is the collective material remains of a group that lived about 30,000 years ago, in the Stone Age of southern Italy.

Because the sites are so ancient, the archaeologists have little to work with in the present, leaving much about whoever left the Uluzzian remains unknown. At the time, Neanderthals were making their last stand in Europe, and the climate was seesawing between cold snaps and warmer periods.

In such harsh and varying climates, the tools that Neanderthals traditionally used may not have been as useful, forcing them to improvise. “There would have been an advantage to pause and develop new strategies,” said Julien Riel-Salvatore, lead author of the study, which was published last August in the Journal of Archaeological Method and Theory.

A central question for Riel-Salvatore was whether or not the Uluzzian style could have developed independently of modern humans, who were creating similar technologies to the north, in the heart of Europe. The Uluzzian area, located at the bottom of Italy’s boot, was isolated by water on three sides, and bordered to the north by what Riel-Salvatore described as a Neanderthal “population buffer” in central Italy. The population buffer was a large population of Neanderthals that lived to the north of the Uluzzian area, and showed no signs of interacting with humans or changing their tool-making methods.  Because the Neanderthals were cut off from the rest of world, the Uluzzian toolkit could have developed independently of human influence.

The findings indicate that even though Neanderthals eventually died off, it’s possible that they attempted to adapt to their changing ecosystem.

The other new Neanderthal study, published two months later in the Proceedings of the National Academy of Sciences, was conducted by the archaeologist Thomas Higham of Oxford University. His research was focused at the Grotte du Renne, a site in France that archeologists have excavated since the 1930s.

Researchers there have been exploring a similar tool grouping, which is referred to as a ‘material culture’ by archaeologists, from around the same time period as the Uluzzian, known as the Chatelperronian culture. The set of tools was ascribed to Neanderthals, because Neanderthal remains (some teeth and a part of a skull) were found there. “[Historically,] this is the first site in the world that the Chatelperronian was associated with Neanderthals,” said Higham.

The combination of bones and tools proved to be a convincing argument, until Higham’s paper showed definitively that the site at Grotte du Renne was disturbed long after its initial use. Because of this disturbance, it calls into question whether Neanderthals were even around when the inhabitants at the Grotte du Renne were making Chatelperronian tools.

Higham’s paper threw Riel-Salvatore’s initial findings into a different light, casting doubt on the idea that Neanderthals created the Uluzzian culture. Riel-Salvatore wasn’t perturbed, though. He agreed with Higham that it was still too early to rule out Neanderthal toolmakers at either Chatelperronian or Uluzzian sites, and that more research into the subject was needed.

Further muddying the issue is the fact that no one is certain whether the new, sharper tools were really more effective in coping with the cooling climate than Neanderthal tools. The blunt tools favored by Neanderthals were more clumsy-looking than the bladed stone tools their human contemporaries used, but were produced more efficiently and lasted longer.

If Neanderthals did not develop new tools, it may not have been because they were insufficiently intelligent, but because they were already smart enough to know they didn’t need the cool new tools that the humans used in the cave next door. “Unchanging technology used to equal inability to innovate, but it could have just been them reaching the peak [of efficiency],” said archaeologist Metin Eren of Southern Methodist University in Texas.

“There’s no question that they were a different population,” said Riel-Salvatore, but it may be time to give Neanderthals a bit more credit. Whether they were able to innovate on their own, or just adopted human tools when they were advantageous, many experts now agree that they weren’t just brutish cavemen.

“Could a Neanderthal use a hammer? Maybe. But could he build one himself without imitating humans?” The Neanderthals WERE human! Get your facts straight! If you’re going to write about a subject, the RESEARCH the subject and its terminology. How Stupid!

They are among our ancestors. The likely hood that there was any great difference in mental abilities is minimal and we don’t have a clue which population might have had more smarts if such were even true.

Sorry Mr Swanzey but it you, not the author, who is mistaken. Humans (i.e., homo sapiens sapiens) and Neanderthals are both hominids but by any definition: DNA, culture, physiology, or distribution, they are a separate species.
Recently is was discovered that we were closely enough related to have produced viable offspring but they were most definitely NOT human.

Svante Pääbo and his team at the Neanderthal Genome Project produced “DNA” findings that suggested that everyone outside of Africa carries about 1 to 4 percent Neanderthal-inherited genetic material. These findings as well as the teeth found in Qesem cave near Rosh Haain, central Israel, seriously bring into question whether or not Neanderthals were as distantly related as had been previously assumed. Indeed they may have been “human.” I have to agree that the language of this article is not as well defined as it should be considering the developments in the field during the last 12 months. Personally, I have always found it ridiculous to assume that creatures as adaptable and mobile as our most recent ancestors stayed in their cubby holes for 90,000 to 170,000 years.

Amazing how new discoveries continue to indicate that
Neanderthals were not the brutish creature as previously
thought.