“Someone told me that human beings have been around for only 60 thousand years. This is shorter than I thought. Is this true? Where did we come from?” 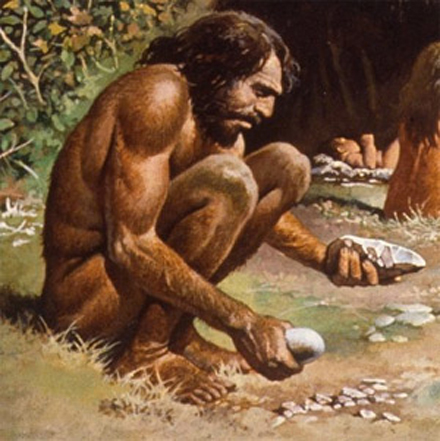 The origin of modern humans is messy – like that of any species – and dates from the late Pleistocene Era, which occurred 10,000 – 1 million years ago. Hundreds of researchers have pieced the story together, but not from the fossilized skull and bone fragments that dramatically grace covers of National Geographic. It is information obtained from living humans that has produced the most detail: our genes tell the story.

Modern humans, Homo sapiens sapiens, evolved from a now extinct African ancestor about 130-thousand years ago. Most biological anthropologists believe that we almost didn’t make it, barely squeaking through a population “bottleneck,” meaning all of the six billion plus people around today are descended from a small group of individuals (between one and ten thousand).

The signature of the bottleneck, according to scientists, is the lack of genetic variation among people today. Yes, despite the visible variation we see among modern humans – the blue and brown eyes and the differences in skin color – our genetic diversity is small compared to other species. The cause of the bottleneck is unknown, although one hypothesis suggests a severe ecological disaster occurred, such as a massive volcanic eruption, that blocked sunlight and reduced the food supply.

After successfully surviving the population plummet, modern humans emerged from Africa about 60 thousand years ago to populate a world already filled with other species of large-brained, tool-using humans, such as Homo erectus in Southeast Asia and Neanderthals in Europe.

Over time, modern humans either out-lasted or out-competed all other human-like species. Now, our closest relative is the chimpanzee, one of our fellow apes. The last living common ancestor between chimpanzees and humans, or the point of divergence between the two species, is estimated to have lived between five and seven million years ago, although a new study published in early 2007 challenges this notion.

Published in PLoS Genetics, the article suggests that the human-chimpanzee split may have been about four million years ago, around the time when Lucy, a bipedal relative of humans, was running around. Just last year, another paper described evidence of interbreeding between proto-humans and proto-chimpanzees more recently than 5.4 million years ago, an event that would not be uncommon when two populations are slowly splitting into two distinct species.

Scientists base their hypotheses about the interlocking chimpanzee-human history on DNA analysis. The difference in DNA between modern chimpanzees and modern humans is between one and four percent. In fact, some researchers think that chimpanzees and humans are so closely genetically related that they should be in the same genus: National Academy of Science member Morris Goodman of Wayne State University and colleagues found a 99.4% similarity between chimpanzees and human when they restricted analyses to the two percent of genes that control protein production and suggested that chimpanzees should be renamed Homo troglodytes.

Given that humans and chimpanzees are so similar, it is hard to figure out how the massive physical and behavioral changes between the species developed. How did people get the ability to process complex math or write the great American novel? New research, published in Nature, on DNA that does not make proteins – the “junk” DNA – has found some drastic differences between humans and chimpanzees.

Comparing an area of the genome that deals with fetal brain growth in humans, chimpanzees, and other animals, researchers found there are 18 individual base pair changes between chimpanzees and humans, but only two base pair changes between chimpanzees and very distantly related chickens. The greater amount of difference between chimps and humans, as opposed to chimps and chickens, implies that these genes evolved very rapidly over the time since humans and chimpanzees diverged. This indicates that some of the evolutionary changes that make us uniquely human have to do with the size and complexity of our brains. In another paper also published in Nature, scientists scanned the human and chimpanzee genomes for differences and demonstrated that humans developed genes associated with speech – one of the most noticeable differences between man and chimp – a mere 150,000 years ago.

As scientists piece together human evolutionary history, they are able to look more precisely at how we have become so different from our ancestors in such a short time. One way to study this is to look at gene expression, or how much of a particular protein product a gene codes for. Geneticist Svante Pääbo of the Max Planck Institute for Evolutionary Anthropology and colleagues looked at gene activity in the heart, liver and brain of chimpanzees, humans and other primates. Their comparisons showed that only the brain had increased gene expression in humans; gene expression in the liver and heart was similar in all species, and chimpanzee brains showed no greater activity than other nonhuman primates.

The implication of increased genetic activity in human brains in recent evolutionary history highlights one of the primary differences between humans and our nearest relatives. We may be the new species on the block and not that different genetically from our closest living relatives, but our large brains, tool use, and language ability have allowed us to uniquely adapt to our environment.

do chimpanzees have self-awareness? can they objectify themselves?

What would happen if scientist allowed a male human and a female chimp to copulate or vice-versa? would the dna be okay to produce an offspring or would it just not work?

humans have grown older taller clever will we get more taller get much older and more clever,,will the human shape that we no today change

There’s your answer to where we came from. (:

Thanks, Sweetbearies. Hammocks are a lot of fun for both kids and adults, and both Sword and Bow were exseopd to them early on. My first hammock was one I got as an adult, right after getting my linguistics degree. I was trying to furnish my apartment as cheaply as possible, so I got a hammock with a stand for the living room, instead of a couch. All my guests got a real kick out of it.