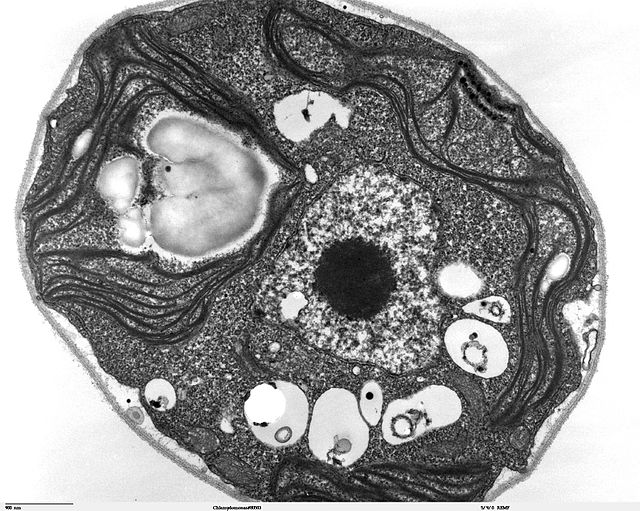 Single-celled organisms, such as this green algae, kill themselves. But when they do, they leave nutrient gifts for their neighbors. Helping other organisms survive at their own expense suggests cooperation. [Image Credit: Dartmouth College, Wiki Commons]

The resting place for the dead is not with the living for a very biological reason: A body rots. And the poetic return to dust is nauseating.

Within hours, the lungs that once rhythmically inhaled oxygen and exhaled carbon dioxide now only emit the gas ammonia. The once pink, pulsing tissues decay into the aptly named proteins cadaverine and putrescine. They smell horrendously — of death. Soon, flies alight on the corpse and lay their eggs. Within a couple of days, the newborn maggots crawl over the body, simulating movement in a new, horrid way. Without precaution, diseases spread and infect the still breathing bodies that share the space with this unrecognizable pile of poison.

To protect the living, we inter human bodies. Ants drag their fallen brethren to ‘morgues’ in their underground cities. Bees remove decomposing workers from their bustling hives. All organisms that live in groups must work together and take care of their dead. Otherwise, the death of one leads to the death of many.

But what happens when a cell dies? There is no cell cemetery in which to deposit its decaying remains. How do living cells survive the assault of a noxious neighbor?

They survive because there isn’t an assault in the first place. Cells kill themselves, neatly, and recent research with green algae shows that such an extreme sacrifice does more than just save neighbors from an unpleasant onslaught. It actually helps the organism’s overall population thrive. This poses a profound question: Can even a single cell be altruistic?

Rather than passively dying from old age, a cell actively shuts itself down step by step in a process called programmed cell death. Like the shutdown of the artificial intelligence machine HAL in 2001: A Space Odyssey, the cell flips one switch after another, methodically ending function after function until all that is left are the innocuous — and reusable — building blocks. Without this altruistic act, the guts of the deceased cell would pollute its surroundings. Freed enzymes would gnaw on the unsuspecting passersby, and hazardous poisons and corrosive pHs would dismantle neighboring structures.

Instead, when a cell’s time is up, it sacrifices itself.

This act is essential for multicellular organisms, such as humans, to live. When an organism is made up of many cells, they must work together as a whole, so “it’s quite reasonable that the organism sacrifices some of its cells for the benefit of the whole group,” explained Armin Rashidi, a theoretical evolutionary biologist at the University of Arizona. Our skin cells, for example, continually lay down their lives and as a result, any cell harboring a possible cancerous mutation settles as a mote of dust on a living room sofa, harmless. It’s for the good of the organism, and since our bodies are made up of trillions of cells, when some die, it doesn’t matter. It doesn’t threaten the existence of the organism; it preserves it.

But life throws curve balls, and organisms that are only one cell — bacteria, yeast, fungi, algae and many more — kill themselves, too. The entire animal perishes. Why would evolution favor a suicidal organism?

“No organism in nature should commit suicide because natural selection selects for life, not death,” said Rashidi, one of the authors of the recent study in The American Naturalist that explored why unicellular organisms kill themselves. One reason takes into account the parents that live next door. Single-celled organisms reproduce asexually, which means their children are clones. Since the kids don’t leave the nest (there isn’t much room to disperse), the cell isn’t sacrificing itself for a stranger, but rather for a mother or a sister that has the same genetic makeup. “It’s the genes that matter, not the organism,” said Rashidi. When it comes down to it, it’s all about carrying on the lineage.

While the argument is logically sound, “there was no laboratory evidence to support it…and that was a big draw back,” said Pierre Durand, an evolutionary biologist at the University of the Witwatersrand in Johannesburg, South Africa and lead researcher of the study. The research team used sonic waves to kill all the cells in one of two groups of single-celled green algae. The waves rapidly ruptured the cell membranes so that the contents of the cells spilled out; they were murdered. The second group was subjected to heat — not enough to kill them outright, but enough to cause stress and signal that death was imminent. These cells shut themselves down nice and tidy.

The remnants of each group were then added to two new, living groups of algae. The population that received the murdered cells decreased in number, while the population that received the suicidal cells actually increased in number compared to the control. The first group was harmed as the second benefitted from the deaths of its kind. It’s not just cell death that matters, but also how the cell dies.

“Knowing that is important, and it wasn’t known before,” said Michael Travisano, an evolutionary geneticist at the University of Minnesota, who was not involved in the study. But the implications of the results go much further than growing or dying green algae. “If it had only that data aspect, I wouldn’t have been as interested,” he admitted. What’s fascinating to Travisano is that the cell that kills itself is not only not harming its neighbors, it’s also giving them resources to prosper. As the cell passes on, it bequeaths little gifts that allow other cells to weather whatever stresses are threatening the population. This suggests cooperation.

Such altruism is costly to the sacrificing organism, which has to take both time and energy to package its content and break down its DNA. Not to mention the price of its life. The expense, though, is paid for because the gifts it wills to its neighbors help the species continue, explained Richard Michod, an evolutionary biologist at the University of Arizona and coauthor of the study. The cost to an individual nonetheless makes sense for organisms living in a group. Instead of the death of one leading to the death of many, the death of one leads to the survival of many.

An alternate explanation for programmed death in unicellular organisms is that it evolved accidently, meaning that a random genetic mutation resulted in cell suicide. The mutation wasn’t rapidly eliminated by natural selection because the harmful, get-rid-of-self trait was tied to another necessary trait. Eventually, programmed death was co-opted since it turned out to be helpful to the population at large. While this theory has its proponents, Michod doesn’t buy it. “I believe there’s a good reason that cells are killing themselves,” he said. “It’s so dramatic that it can’t be a mistake. Life was all unicells for three billion years. They are very well adapted, well-tuned machines.”

Life is no longer entirely single-cell organisms, and how multicellular organisms arose is a fundamental question in biology. The living world is made up of “quantum leaps” of complexity, explained Michod. There are single-celled animals and plants, and then large, extremely complex animals and plants. There’s almost nothing in between. How did these leaps in organization emerge? “We started thinking,” said Michod, “well, could it be that programmed cell death could be related to the evolution of multicellularity?”

The potential answers are speculative for now, and the research continues, but the possibility is intriguing. Michod sets up the following hypothetical situation: Picture a single-celled organism in a dense population. All of sudden there’s a threat, such as heat, that may wipe out the whole crowd. As it grows hotter and hotter with each passing minute, the organism kick starts its death program. Remember, however, that the cell could survive if its neighbors shut themselves down and leave an inheritance: priceless resources to stave off the swelter. If it stalls its own shutdown, then it may outlive the passing heat.

Bet hedging might then take place in the group, Michod hypothesizes. To die or not to die? Such a situation, though, leaves the cooperative population open to cheaters. Unrelated organisms may sneak in and take advantage of the situation, scooping up the nutrients that rightfully belong with the family. Social gains start evolving; it could be beneficial to act as a team player, or it could be beneficial to adopt a cheating strategy. Over time, group members’ responses may flip back and forth in a way that leads to the dynamic complexities of social interactions.

Michod’s research team wants to test whether they can get the same results using a variety of organisms, not just green algae. Does cell suicide in other cell populations, and amidst other species, still benefit the group? Is there a ‘death signal’ between the organisms that cues some of them to issue their last wills and testaments? Programmed cell death may be just the cooperative phenomenon that explains the origin of such cellular social interactions. It may even explain the appearance of animals and plants made up of multiple cells.

Perhaps the self-sacrifice of a single-celled organism — in which case multiple organisms are working together — is responsible for the living beings that we see all around us today. Maybe life as we know it began with death.

I wonder what the relationships among different single-celled organisms are. In the water, say, do different species of bacteria, protists, fungi interact and cooperate? They probably do. It would be interesting to compare intra- and inter-species cooperation. Natural selection would discourage one species sacrificing itself to benefit another, so I bet the cells commit suicide in such a way that other species don’t benefit–maybe cells in the middle of a cluster kill themselves, for example, to prevent other species on the edge from benefiting. Yet there may also be symbiosis among various single-celled organisms.

That is such an exciting proposition!
I was just thinking that for the same reasons we bury the dead apoptosis (suicide) is favorable over necrosis (murder)– it’s just healthier for everyone else. Most cells apoptose when they get too old don’t they? Maybe its worth putting their last bit of energy into dying neatly to benefit their progeny?
An interesting discussion to be sure! Although you totally had me at that awesome picture of the algal cell :)

It’s going to be ending of mine day, however before ending I am reading this wonderful piece of writing to increase my
know-how.

Prices law, guys. Altruism isn’t real, they do it to further similar genetics, just like we do. Guys name was George price, fascinating stuff.