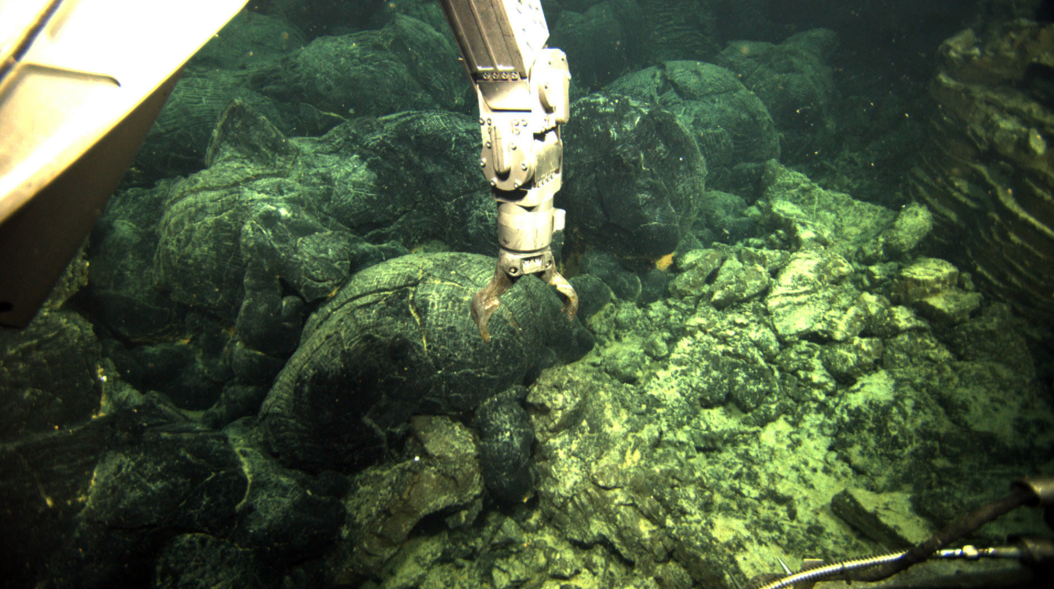 “What the heck? This looks very strange. Something is going on,” the dive log read on July 28, 2011, at 7:35 a.m.  At 8:30 a.m.:  “That lava looks fresh-ish.”  At 2:50 p.m.:  “That is UNBELIEVABLE.”  These notes document the expedition to an undersea volcano, Axial Seamount, about 250 miles off the Oregon coast on the day when researchers Bill Chadwick, of Oregon State University, and Scott Nooner, of Columbia University’s Lamont-Doherty Earth Observatory, realized that it had erupted nearly four months earlier. The eruption surprised them, because they had expected a monitoring system to alert them of any signs of eruption.  The system, they discovered, had failed, leaving the eruption unnoticed for months.

This eruption is significant not for the surprise element but because the pair of scientists had predicted when it would occur, and they were (almost) right.  This is the first time geologists have formally predicted a volcano eruption, that is, published a prediction in the scientific literature.

In a 2006 paper in The Journal of Volcanology and Geothermal Research, Chadwick and Nooner had predicted an eruption before 2014; in 2009, in a paper published in G-Cubed: Geochemistry, Geophysics, Geosystems, they pushed back their prediction to 2020 in response to new data.  In fact, it erupted, as they discovered this summer, in 2011, three years before their first deadline.

“Useful but inexact,” is how Lamont-Doherty geologist Bill Menke, who mapped the volcano’s magma chamber underground but was not involved in the prediction described it in an email.  “Most volcanoes, including Axial, have been erupting every now and again for hundreds of thousands of years.  So the mere statement that a volcano will erupt again in the future is a no-brainer.”

David Clague, a geologist at Monterey Bay Aquarium Research Institute, pointed out that both parts of the prediction have proved unreliable at other volcanoes.  “Long-term forecasts are very difficult to make, and the reason is, you have to assume something about what state the volcano has to achieve to erupt, and that state … changes all the time.”

He gave Mauna Loa, Earth’s largest volcano, on the island of Hawaii, which last erupted in 1984, as an example of a volcano for which both assumptions proved wrong. “Immediately, after the eruption was over, [it] started refilling the magma chamber, and so the volcano was puffing up very, very quickly. And using the rate of puffing, or inflation, that happened in the first few months and years, one would have predicted that Mauna Loa would erupt within four or five years.  And here we are now, 27 years later, and it still hasn’t erupted.”  He continued, “That’s in part because the rate of change of the volcano slowed down and in part because we were assuming that when it got back to an inflation level equivalent to what it was before the eruption in 1984, it would erupt.  It didn’t erupt when it got to that point.”

In the case of Axial Seamount, Chadwick said, they don’t know what height the volcano reached when it erupted in 2011 because they had a two-year gap in their measurements, during which instruments weren’t recording the inflation rate, and they have no idea how the volcano changed during that time.  They can only assume that it continued at the rate measured before or after the gap.

That is what they did in their 2006 paper — extrapolate across the data gap — in order to determine that, from 1998 to 2004, the volcano was nearly halfway to the predicted eruption point: it had risen 5 feet.  The inflation rate had leveled off to about 7.5 inches per year and, assuming that steady rate would continue, the researchers predicted that it would take another nine years for the volcano to reach its 1998 heights and erupt again, around 2014.

But, like at Mauna Loa, that rate wasn’t completely steady — it slowed down — so in a 2009 paper, Nooner revised the forecast to before 2020.  Then, the 2011 eruption happened earlier than predicted.

Past predictions about volcanoes on land have had mixed results. One such prediction prompted an evacuation of thousands of people around an Ecuadorean volcano, Tungurahua, which scientists thought would erupt in 1999 but which did not erupt until 2006. (Tungurahua has since erupted several times, most recently in April 2011.)

Chadwick and Nooner study Axial Seamount in part because it is too far from shore and too deep under the sea to pose a threat to humans and, as Nooner said, they “can make these forecasts with very little risk.”

Other undersea volcanoes that are closer to shore do affect people, Nooner said, releasing gas that could sink a passing ship and slowing rising to form islands.

Because it is so difficult to divine what a volcano will do, Chadwick and Nooner hate the word “prediction.” They prefer the term “forecast” and even correct those who use the p word. “Forecast please,” Chadwick wrote in an email.

Despite the difficulties of forecasting volcanic eruptions, Chadwick and Nooner continue to try.

“What we do know,” Chadwick said, “is that in 1998, the [it] had deflated 3.2 meters, and this time, it’s only down 2.4 [meters].”  He continued, “If it’s true that it always inflates to the same level, then it should be a smaller amount of time before it erupts again. … It should only take,” he paused, “seven years this time.”

How do you find a way to create a real wonderful crowd of commenters to your website?

actually volcano
tungurahua had an eruption in 1999.