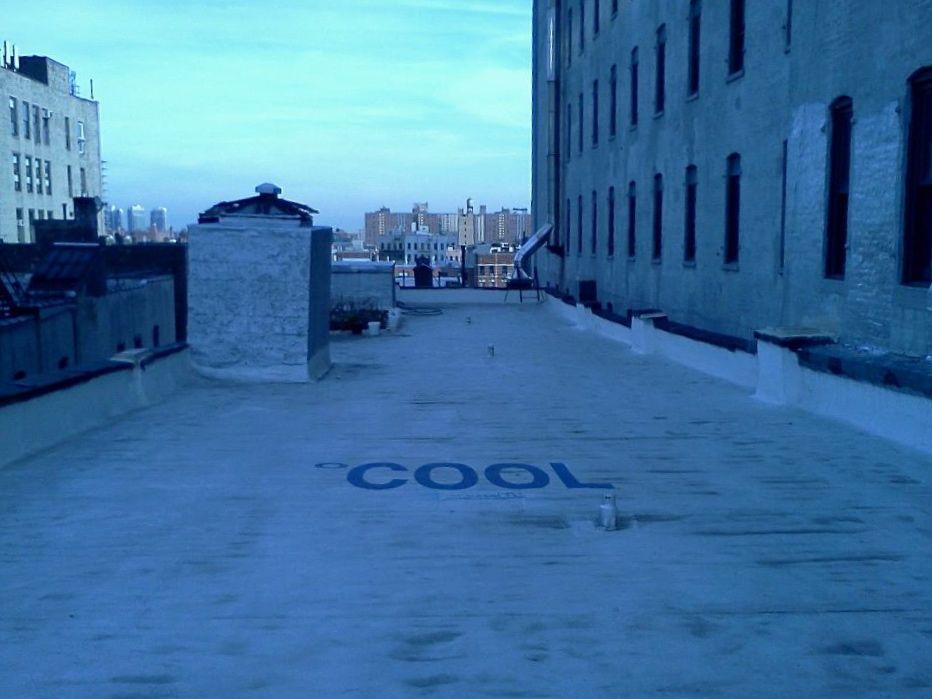 The view from the white roof of the Bowery Mission. [Image Credit: Ashley Taylor]

Juan Carlos Pineiro Escoriaza, filmmaker and entrepreneur, has a lofty goal: to paint every roof in New York City white by 2030, the year he will turn 49.

On a recent Saturday, in the living room of his apartment in Queens, Escoriaza led a meeting of the organization he thinks can achieve that goal, the White Roof Project.  A wall stencil reminded the seven participants, who looked to be in their 20s and 30s, to “Keep Calm and Carry On.” A decorated, fake Christmas tree in the corner marked the beginning of December — although no snow had fallen to temporarily whiten the silver rooftop of Escoriaza’s apartment.

Since Escoriaza founded the White Roof Project in 2010, his organization has slathered more than 45,000 square feet of rooftops in the Lower East Side of Manhattan with white, reflective paint. The goal? A cooler, more energy-efficient city. 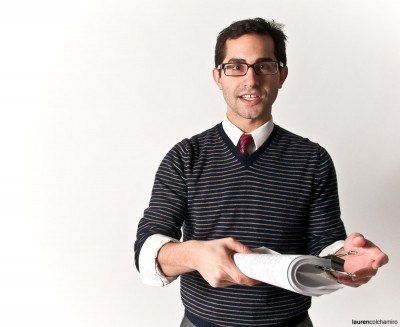 Black surfaces, like roofs and roads, absorb heat, creating what are called urban heat islands — metropolitan areas that are warmer than their surroundings. By reflecting heat, advocates say, white roofs keep buildings cooler, reduce their need for summer air-conditioning and, accordingly, their carbon footprints.  One such advocate, who inspired Juan Carlos, is former President Bill Clinton.  In a Newsweek article, “It’s Still The Economy, Stupid,” in June 2011, Clinton wrote, “Every black roof in New York should be white; every roof in Chicago should be white; every roof in Little Rock should be white.” Clinton supported white roofs as a way for people to save money that they could then use to stimulate the economy.

Juan Carlos found out about white roofs from his wife, Taylor, who was then president of the Manhattan Young Democrats. In April 2010, on Earth Day, the Young Democrats sponsored a talk about the environmental benefits of white roofs, by Dan Miner of the Sierra Club.  At the time, New York Mayor Michael Bloomberg and former Vice President Al Gore had already formed a city initiative to paint roofs white, called NYC °Cool Roofs.  Miner’s talk inspired Juan Carlos to join the cause. The next day, he founded the White Roof Project.

With his big smile, his black, rectangular-framed glasses, and his yellow necktie with blue polka dots, Escoriaza looks like the caricature of an optimist. As he described the project in a coffee shop (he drank nothing, but didn’t seem to need the caffeine), he beamed energy and gesticulated like mad even though he said he was “spent” after a day at his paying job, designing graphics for a website.

Juan Carlos, who does not have a science background, says he takes the scientific information “buried in those old PDFs,” makes it accessible and puts it in action.

The White Roof Project’s first undertaking was painting the 10,000 square-foot roof of the Bowery Mission, on Manhattan’s Lower East Side. On a December day up on the Bowery Roof, all was sky, chimneys and the iconic water towers that form part of the White Roof Project logo. It is not the sparkling white one might imagine of an 85-percent-reflective surface but rather, the dull white of an asphalt sidewalk.

The White Roof Project offered to raise the funds to buy the paint ($3,000 worth), gather volunteers and paint the roof, and the Mission accepted. The Sierra Club alone donated $500, with small donations making up the rest of the funds. One hundred people — too many volunteers, in fact — came to help paint.

Organizing all of this is not Juan Carlos’ role. Heather James, the project’s executive director, handles fundraising and event planning — what she calls the “boring functions” of the organization.  Heather, Juan Carlos and a few others at that prophetic Young Democrats Meeting founded the organization together. Juan Carlos did not want the executive role, James recalls. He came up with the title, designed the website and promotes the project; Juan Carlos is the visionary.

The son of a military doctor, Juan Carlos was born in California and led a peripatetic military childhood. He graduated from New York University with a bachelor’s degree in film in 2003.  After college, he spent a few years trying reality TV and industrial documentary, but he wasn’t happy.  The work wasn’t creative.  He decided to abandon contract work and make a feature film about virtual worlds, “Second Skin.”  He recently finished shooting his second feature, “Know How,” about New York City children in foster care.

“He’s a filmmaker,” Taylor said.  “It’s really his calling.”  But the glint of white roofs caught his eye.

This fall, the White Roof Project completed its second project: painting the roofs of 20 buildings on what’s called the Fourth Arts Block (FAB), in Greenwich Village. Now the Project is trying to expand its organization beyond New York by creating chapters in other parts of the U.S.

But not everyone agrees that white roofs help the environment — indeed, some researchers argue that it could make things worse.

Mark Jacobson, a civil engineer at Stanford University, calls white roof projects a “hare-brained scheme,” both for New York and for the world. One of the arguments against white roofs is that they reflect heat in the winter as well as in the summer, and thus would increase winter heating needs and counteract the summer energy savings.  Even scientists who speak in favor of white roofs, such as the Heat Island Group at Lawrence Berkley National Laboratory in Berkeley, California, acknowledge this problem (see the map on their website.) This becomes truer the farther north you go.

Jacobson thinks that even New York is too far north for white roofs.  His recent paper in The Journal of Climate claims that a worldwide shift toward white roofs would increase global warming.  Another study, from the lab of Keith Oleson of the National Center for Atmospheric Research and published in the journal Geophysical Research Letters, found that if every roof in the world were painted white, the winter heat loss would more than counteract the reduction in air conditioning.

But the White Roof Project discounts such claims. As James wrote on the organization’s blog, “White roofing is a targeted strategy that works well in many dense urban areas; it was never recommended for a sort of willy-nilly, throw white coating everywhere implementation plan.”  In a 2010 study focusing on urban areas, the Heat Island Group found that if all U.S. commercial buildings were painted white, the cooling benefit of white roofs would be eight times higher than the heating penalty.

Juan Carlos does not get bogged down by such complications.  Instead, he continues to believe passionately in the slogan he recently proposed for the White Roof Project: “Simple. Tangible. Change.”

Believe it or not, the number one city for cool roofs is Toronto, Canada. Now how far north is that? In the winter: The sun is less intense, there are fewer hours of daylight, the angle of the sun is less and not so much this year but sometimes snow converts your building to a cool roof anyway! Did you know that 12% of our imported oil is used for asphalt products- as in asphalt roofs? Not to mention the hazardous water runoff from these products. We need to make smarter roofing choices. Cool Roofs, depending on the product are certainly the way to go.

what this article fails to acknowledge is that the temperature asphalt roofs can climb to become-up to 150 degrees F in the summer- can cause the asphalt to emit poisonous fumes into the air as NOx particles, as well as other forms of air pollution. as we are phasing to a national health program, it is important to consider the macro effects of this issue.

Many commercial buildings don’t need heat at night or on weekends, and get warmed up at the beginning of the business day — so no loss there. Houses are different.

These folks need to address both reflectivity and _emissivity_.

After we put on a white high-emissivity roof, our attic was 40F cooler on hot still summer days — metered right at the roof deck — compared to under the old tar and gravel roof.

Emissivity is how well the material _emits_ heat — gets rid of it to the sky rather than conducting it down into the building.

Point your infrared thermometer at the sky; now point it at low clouds; now try it on a clear night.

If your attic has vents, and it’s humid, air will circulate in and if the temperature of the _inside_ of the roof deck is at the “dew point” water will condense there. It will also be condensing on the outside — just like it does on automobile surfaces. But that’s no worry. Inside, under the roof — it can be a problem.

This isn’t a killer problem. But if you’ve put on a high-emissivity roof, look under it on cold nights and make sure you don’t see water condensing there.

The White Roof people didn’t tell me this when I was doing the research — they thought it only mattered where the condensed water would freeze and break the roof. But it matters in warm climates as well. My local greengrocer told me about it. And he’s right.

We had to run a dehumidifier in the attic some of the time to get it dried out.

There are real issues here worth thinking about for old buildings that leak a lot of air up into the attic along with moisture from living.

What’s needed — anybody want to design this? — is a little bit of computer attached to humidity meters and little computer type box fans — so the house is smart enough to bring in outside air whenever it will _not_ drop its load of water under the cool white roof at night, and when the air already in the attic can stand to be replaced by somewhat drier air.

PPS: “A remaining issue associated with white roofing systems, identified from our measurements, is their tendency to maintain greater moisture levels, both on the roof surface as well as the attic interior than with asphalt shingle roofing types.” http://www.fsec.ucf.edu/~bdac/pubs/PF337/FRFPPR.html 5/23/2002
Comparative Summer Attic Thermal Performance of Six Roof Constructions Page 9