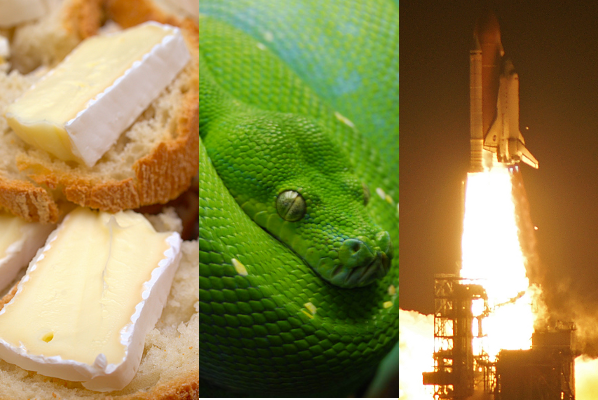 [Image Credit from left to right: Rofi, LongitudeLatitude, and Matthew Simantov, all courtesy of Flickr]

In the 1970s, the newly formed EPA started a program to capture the “environmental happenings and non-happenings” in the country in photographs. The New York Times Green Blog writes about the rediscovery of this photo collection and links to some stunning images.

Being born as a twin guarantees an immediate connection to another person — but it also confers an immediate connection to science, as a potential research subject. A National Geographic article talks about the eternally fascinating topic of twin studies, and what studying twins who were raised apart can tell us about the competing influences of nature versus nurture. And since it’s National Geographic, there is a gallery of twin photos, the individual twins’ differences standing out all the more because they are so alike.

Twins are already double the fun, and now there are more of them in the United States. In 1980, only 1 in 53 babies was a twin, but in 2009 that rate jumped to 1 in 30. The Associated Press ran A government report Wednesday about the twin increase, with experts crediting it to women waiting until their 30s (when the chance for twins increases) to start families, as well as higher use of in vitro fertilization.

Despite the myth that snakes are deaf, scientists have found that they can still “hear” vibrations internally. A reporter at The Washington Post reports that when rattlesnakes shake their tails, their skulls can pick up vibrations that are heard by their internal ears. Snakes don’t have external ears, so it’s unclear if they can hear sound waves traveling through air.

In a story worthy of Alien, researchers now wonder if the declining bee population can be blamed on a parasitic fly. According to The Boston Globe, phorid flies lay their eggs in the bee’s abdomen, which causes the bee to turn into a bee zombie, walking in circles with no clear sense of direction and eventually leaving the hive to die. Scientists at San Francisco State University found the flies in three fourths of 31 hives they sampled in the Bay Area.

Well, this is huge. A Christmas Day earthquake in Ohio was probably the result of pumping water used for fracking back into the earth. Definitely keep an eye on this story in the coming weeks.

With commercial space travel really set to take off — pardon the pun — in the next year or so, some companies are already attempting to turn a profit. By selling “space travel insurance” travel agencies are able to make a pretty penny off their more adventurous customers.

I’m sort of cheating because this was from about two weeks ago, but I love this piece on meth from Scientific American. Leave it to them to cut away the hype and give us a good dose of hard science.