Are your body’s antioxidant defenses enough to save the day? 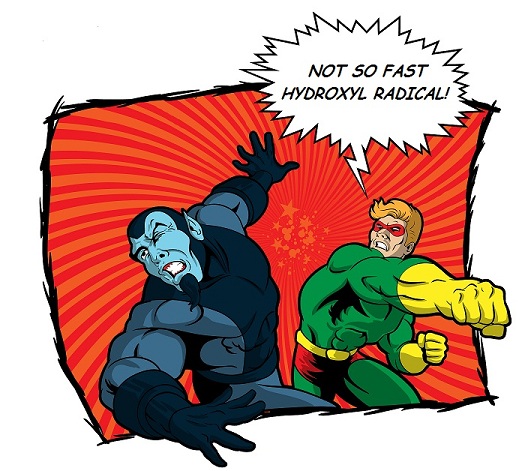 Coffee – a cause for concern or a cure?

If you’re like me, you’re frustrated when someone tells you something is good for you but doesn’t explain why. This has been the case with antioxidants, a mysterious natural chemical supposedly responsible for the health benefits of blueberries, pomegranate juice, and even red wine. It turns out that figuring out what’s so super about these foods just requires a bit of basic chemistry and a little imagination.

Our bodies are made up of atoms, with high-energy electrons moving in pairs around the nucleus of each atom. A molecule that is missing an electron from one or more of its pairs is called a free radical. Because of its missing electron, a free radical molecule is unstable and therefore highly reactive – it will interact with almost anything it encounters.

Free radicals are byproducts of normal cell function. Cells generate the energy they need by reducing molecular oxygen to water. About one to three percent of all electrons involved in energy production actually “leak” and become a free radical called superoxide. When superoxide reacts with nearby molecules, it sets off a chain reaction that results in the creation of more free radicals. One of these is the hydroxyl radical, which reacts strongly with DNA molecules and damages their double-helix structure. The longer these free radicals have to wreak havoc in the cell, the more damage they do to the cell’s genetic material.

In response to the threat of superoxide and its dangerous sidekick the hydroxyl radical, the body uses its antioxidant system to keep them from accumulating in the cell. Under normal conditions, antioxidants step in to neutralize a free radical by using up its unpaired electron.  The molecule glutathione (GSH) is the most abundant antioxidant in the cell. To protect the cell against damage caused by free radicals, GSH replenishes the cell with new antioxidants and regenerates used antioxidants so they can continue rounding up free radicals.

Scientists have discovered a link between severe oxidative stress and the development of a number of diseases. Damage to cellular DNA is thought by many clinicians to be an early step in the development of cancer, cardiovascular disease and arthritis. Oxygen-hungry neurons in the brain are particularly susceptible to free radical damage, which has been linked to both Alzheimer’s disease and Parkinson’s disease. Oxidative stress can even be blamed for the wrinkles in your skin. The free radical theory of aging suggests that extensive DNA damage accumulated over time eventually kills the cell and causes an organism to age. While most researchers agree that there is a connection between free radical damage and human health, the strength of this connection is still debated. Future research will likely indicate that free radical damage is only one possible contributor to aging and the development of certain diseases.

Given that free radical damage may have such serious health consequences, it seems logical to want to give our body’s endogenous antioxidant system a boost. But before you buy that expensive blueberry beverage you should know that recent studies show that the cancer fighting benefit of a diet high in antioxidants may be small – our cells’ natural free radical defenses end up doing the majority of the work. A better approach would be to limit exposure to environmental toxins – UV radiation, air pollution, pesticides and even some common drugs like acetaminophen can all cause oxidative stress in different organs of the body. In the case of exhaustive exercise, which can create cellular conditions conducive to free radical formation, antioxidant supplements can even do more harm than good. So until the connection between antioxidants and human health is better understood, it may be a good idea to consume antioxidant rich foods in moderation and leave the rest to the experts: your cells’ antioxidant superheroes.