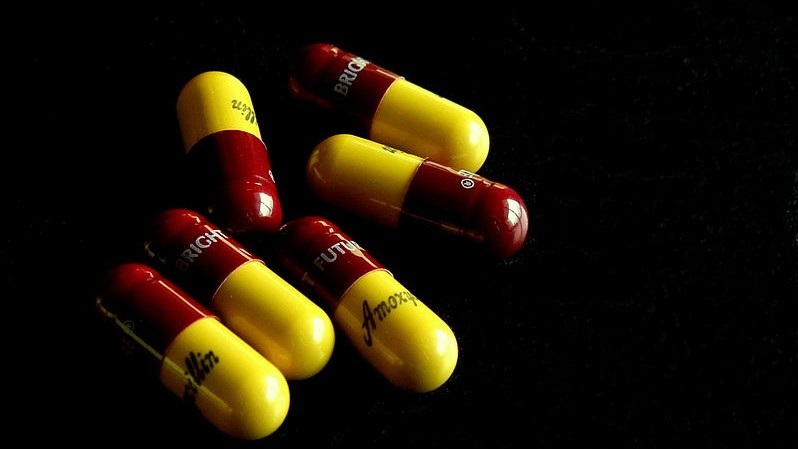 Amoxicillin, an antibiotic given to malnourished children in a recent study [Image credit: Malcolm Koo via Wikimedia Commons]

Giving antibiotics to children suffering from severe acute malnutrition may improve their chances of recovery, according to a new study in the New England Journal of Medicine. Researchers found that children treated with antibiotics were more likely to survive and gained more weight than those on the placebo. These results contradict a less rigorous study conducted previously by the same group.

“The most remarkable thing to us was the day we realized that our results were the exact opposite of what we expected,” said Dr. Indi Trehan, a pediatrician at the Washington University in St. Louis Institute for Public Health and the lead author of the paper. “We really didn’t think antibiotics would help.”

By conducting a thorough investigation into whether antibiotics can help malnourished children, Dr. Trehan and his colleagues are “asking a very, very important question and answering it very well,” said Dr. Kathryn Maitland, a consultant pediatrician affiliated with Imperial College, London.

Though severe acute malnutrition is rare in industrialized countries, 19 million children suffer from the condition globally, most of them in South Asia and Africa; it  kills over 1 million children per year. Severe acute malnutrition also leaves its victims weakened and more susceptible to infections. When the disease used to be treated in hospitals, where the crowded quarters made it easier for infections to spread, children were routinely given antibiotics as part of their treatment. But according to Dr. Trehan, when treatment became largely outpatient it was difficult to know whether antibiotics were still beneficial outside the crowded hospital setting.

Many people believe that all a starving child needs in order to be cured is a higher caloric intake, but, said Imperial College’s Dr. Maitland, “from what the authors say, it’s not just food.”

The amoxicillin used in the study cost an average of $2.67 for each child’s treatment, while the cefdinir cost $7.85 per child. The antibiotics were added to the standard outpatient treatment for severe acute malnutrition, known as ready-to-use therapeutic food. Consisting of a spread made from peanut paste, milk powder, oil, sugar and nutritional supplements, the therapeutic food costs about $50 per round of treatment.

Using antibiotics “is only going to increase the cost ever so slightly,” Dr. Trehan said. In addition to being cheap, he said, amoxicillin is readily available.

Though the children treated with antibiotics did not suffer any severe diarrhea or allergic reaction, the treatment does carry a possible risk. “If you’re treating large numbers of children…with antibiotics, then you start to worry a little bit about, well, am I creating antibiotic resistance?” Dr. Maitland said.

But Dr. Trehan does not think that antibiotic resistance — which occurs when a drug kills off all but the most resilient members of a strain of bacteria, leaving the remaining more deadly members to proliferate — is likely to develop from the treatment. “We’re not putting every child in the village on antibiotics their whole lives,” he said. “These kids with severe malnutrition are a very small part of the population.”

But though it’s a small group, Dr. Trehan believes that the rest of the world unfairly overlooks these children.

“Nutrition is a big neglected elephant in the room. Everyone talks about malaria, antiretrovirals,” he said. “The biggest impact you could possibly make in childhood mortality around the world is better nutrition.”