How unhygienic habits are exposing students to infection 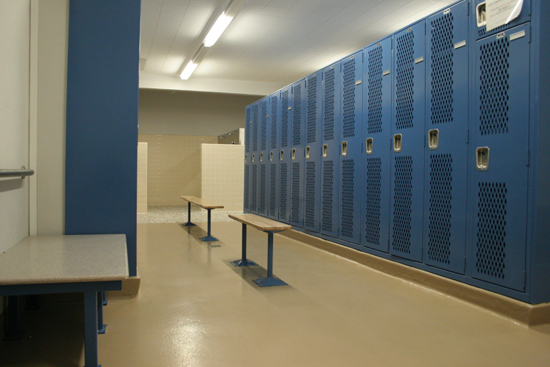 Even in the cleanest locker room, germs are still a threat. [Image credit: Football Fall River]

Antibacterials: Good For You Now, Good For Germs Later?

A Silver Coating in the Fight Against Microbes

Marinating in sweat after gym class is not only unclean, it’s also making students vulnerable to a persistent and potentially deadly bacterial infection, known as community-associated methicillin-resistant Staphylococcus aureus (CA-MRSA). This mutation of MRSA has turned a hospital-based infection into a public problem.

The problem is that many students don’t shower after exercise during the school day. Combine the skin-to-skin contact and abrasions implicit in playing sports with the sweat-laden surfaces of gym equipment and you set the stage for exposure to the infection.

When people say “MRSA” they are usually referring to healthcare-associated MRSA (HA-MRSA). CA-MRSA is caused by three specific strains of staph infection that, unlike the healthcare strains, affect people who are otherwise healthy. Research has found that CA-MRSA is less resistant to antibiotics and more infectious. Rates of the disease have also increased in the last decade, according to the U.S. Centers for Disease Control and Prevention. A recent study in the journal Emerging Infectious Diseases found that the number of CA-MRSA infections has risen more than 33 percent each year from 1999 to 2006.

The infection, which is highly resistant to antibiotics regardless of strain, usually shows up on the skin as a painful bump but can progress to a larger wound. In severe cases, treatment can last years and require surgery. At its worst, MRSA also makes people vulnerable to other fatal infections.
Various strains of MRSA have already struck athletic teams in several high-profile cases. An NFL physician’s survey of its 32 clubs determined there were 33 MRSA infections league-wide from 2006 to 2008.

Children in a physical education class are exposed to the same bacteria-friendly environment as any other athlete and face the same risks, according to Frank DeLeo, a researcher with the National Institute of Allergy and Infectious Diseases. Even adults who use community gyms face exposure to the pathogen if they don’t practice proper hygiene.

So far, few cases of non-athlete infections have been widely publicized, but research has shown the bacteria to be the number one cause of skin infections brought into emergency rooms. That kind of statistical impact is not created by athletes alone.

Science writer Maryn McKenna, author of the prize-winning book Superbug: The Fatal Menace of MRSA, sees reasons why non-athlete students would be overlooked. Athletes receive attention from their teams, fans and the media, she says. “A kid in high school only has his or her mom. Sometimes, not even that.”

Scientists don’t know for sure why rates have gone up. But New York University researcher Barry Kreiswirth thinks it’s because infection rates were so high in hospitals that the disease simply spilled over into the community. With so many people affected, it just took the right strain infecting the right person for HA-MRSA to become CA-MRSA and move from patients to the public.

If mandatory showers would help protect students from this spillover, why have so many schools stopped requiring them? It may simply stem from tighter schedules in many modern schooldays; students are forced to choose between cleanliness and tardiness. Funding is also tight, and soap and towels may not be top priorities, McKenna says. “Also, the attitudes toward getting naked in front of other students have changed,” she emphasizes. For example, in 1994 the American Civil Liberties Union sued the school district of Hollidaysburg, Pennsylvania, arguing that its communal shower rule was a violation of privacy. In response, the school district dropped its shower requirement.

So what can parents and children do to reduce the chance of a CA-MRSA infection? “Send kids to school with wet wipes,” McKenna says. “Make sure they shower and change after sports and don’t just go straight to a friend’s house.” DeLeo also recommends using alcohol wipes for cleaning gym equipment and educating children to make sure they understand the risk. In the end, a little soap could go a long way.

I remember being somewhat anxious the first time I had PE class in my new public high school, because I knew all the boys showered together after class. But I steeled myself for it and when I showered the first time I realized there was nothing to it. No one was staring at me. On the contrary, the coach was telling us to hurry up because we had about 10 minutes to shower, get into our regular clothes, and get to our next class.

After the first time, I hardly thought about being naked with about a hundred other boys and actually grew to like PE class because it was the first class in the morning and the exercise helped me to relax and settle down for class.

I think the current trend towards kids not showering is disgusting. I would hate to be a teacher and have to be around a bunch of sweating and stinky boys or girls.

I realize some people are a bit anxious about public nudity but I suggest they get over it. It’s really not the big thing so many people have made it out to be. And since it seems there is not only a comfort reason but also a health reason to shower, it definitely must be mandatory, with no exceptions allowed for any physically fit kids.

I am a physican and not showering after a workout is unsanitary. We were required to shower after PE decades ago, today, students cannot be required to do anything. The adults have been disempowered by the courts, and especially in a case where an allegation could be made of an alterior motive everybody is afraid to say anything.
Give the power back to the adults and have them make the rules, isntead of capitulating to everything the kids want, or dont want , to do