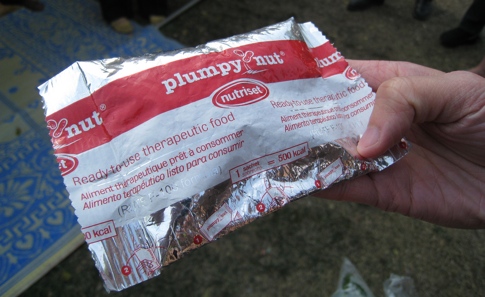 Scientists and humanitarians dispute the best way to use Plumpy'nut, a nutritional supplement for
malnourished children [Credit: mastermaq, flickr.com].

The next time you reach for a jar of Nutella, ponder this: What if something as simple as a nut-based spread could stem global malnutrition? Who should get the stuff? And who should pay for it? Simple matters get sticky when cutting-edge nutrition science meets scarce relief budgets.

Such is the story of Plumpy’nut, a Nutella-inspired, peanut-based, nutrient-rich spread that has been a staple in the global effort to combat malnutrition since 1999. Plumpy’nut is one of several ready-to-use therapeutic foods, or RUTFs, developed in the past three decades to combat severe malnutrition – a condition that afflicts nearly 20 million children and kills 3.5 million of them each year.

Plumpy’nut’s advantages over other therapeutic remedies are undisputed: It doesn’t need to be mixed with water, which is often scarce or contaminated in needy communities; parents can give it to their children at home rather than having to travel to a clinic; it doesn’t spoil; and it is easily digested. Perhaps most importantly, children like the taste – a quality often overlooked in developing other RUTFs. In clinical trials, over 80 percent of patients reached and maintained a healthy height-to-weight ratio when given Plumpy’nut.

Even so, some experts question whether Plumpy’nut is the best treatment for certain forms of malnutrition. The World Health Organization, or WHO, recommends using the spread for one to three months to combat severe acute malnutrition but not to treat moderate malnutrition, which often escalates to the severe form. For moderate cases, WHO and other groups have taken Plumpy’nut off the table not just because of its high cost – about eight times that of standard corn-soy-blend supplements – but also due to its less-than-optimal nutritional content and worries that the spread may discourage local farming.

Plumpy’nut’s creator is among the first to acknowledge its limitations in treating moderate malnutrition. “The best option would be to make sure that poor families have access to a varied diet, with large quantities of nutrient-dense foods,” notes Dr. André Briend in an e-mail message. When this isn’t possible, RUTFs may be the answer, he says, but they require more research. A Paris-based pediatric nutrition specialist at WHO, Briend developed Plumpy’nut in 1999.

The controversy over the spread ignited in 2006, when workers from the humanitarian organization Médecins Sans Frontières, also known as Doctors Without Borders, began distributing Plumpy’nut to nearly all children who visited their Niger field clinics, whether they were severely or moderately malnourished. Doctors often distinguish between the two conditions by measuring a child’s mid-upper-arm circumference. For a two-year-old child, for example, an arm circumference of less than 4.9 inches (12.5 cm) is considered severe, and between 4.9 and 5.3 inches (12.5 – 13.5 cm) is classified as moderate. Alternatively, doctors can use a child’s height-to-weight ratio to discern severe from moderate malnutrition, but this often isn’t practical in field clinics.

“It’s very hard for doctors and nurses to tell someone to go away because they’re just slightly above the threshold,” explains Dr. Milton Tectonidis, director of the malnutrition campaign of Médecins Sans Frontières, or MSF. “You can’t tell them, ‘No, you’re not allowed to get in; we can’t treat you.’” According to Tectonidis, the doctors saw significant improvement in nearly all the severely and moderately malnourished kids – over 60,000 of them.

After the 2006 success, MSF began to call for widespread distribution of Plumpy’nut to treat both moderate and severe malnutrition. Tectonidis explains that local clinics often are overwhelmed with severely malnourished patients. “Unless we reduce the number of severes, we will never be able to keep up,” he says. “We have no choice, we have to intervene.” Plumpy’nut, he believes, holds the most promise for doing that.

Others advocate a more conservative approach. “The principle … can be used for severe and moderate malnutrition, but the balance of nutrients needs to change” when using Plumpy’nut for moderate cases, says Dr. Steve Collins of Valid International, an Ireland-based consulting firm that works with humanitarian groups. For example, Plumpy’nut is relatively low in protein and iron because these nutrients are difficult for severely malnourished children to metabolize. An RUTF spread for moderate malnutrition, Collins says, should contain higher levels of iron and protein. Moderately malnourished children given Plumpy’nut “won’t die, but it’s not the optimum,” he adds.

The biggest problem with RUTFs, according to Collins, is their high cost: around four dollars per child per day, compared to only 50 cents for corn-soy-blend supplements, the standard treatment for moderate malnutrition. He cautions, “When you’ve got a problem that’s affecting tens of millions of children worldwide, you can’t afford to use needlessly expensive products because they’ll never have wide application.”

Tectonidis of MSF agrees: “I don’t think it was ever intended to go everywhere in the world.” He maintains, however, that Plumpy’nut should be distributed more widely in areas with high rates of severe malnutrition, such as Malawi and Niger, to stem the number of severe cases.

Other groups echo Collins’ call for other approaches in treating moderate cases. Bruce Cogill, a United Nations nutrition coordinator, calls Plumpy’nut “revolutionary” in rapid-onset emergency situations, but adds: “Always, the first order is to look for local foods.” He cautions that overuse of RUTFs could eventually lead to the displacement of local farmers and food sources, or even discourage breastfeeding, which is essential for infants at risk for malnutrition. In cases of moderate malnutrition, Cogill favors fortifying local foods with specific nutrient supplements at a fraction of the cost of Plumpy’nut.

Another strategy involves tweaking Plumpy’nut to cut its price and meet the needs of children who are not severely malnourished, according to Dr. Mark Manary of the Washington University in St. Louis School of Medicine. He and his group have directed several clinical trials of Plumpy’nut.

In Malawi, for example, Manary’s group found that the spread could be used in smaller doses to supplement the diets of moderately malnourished children, rather than in quantities large enough to completely replace their diets.  His group also found that reformulating Plumpy’nut to contain soy rather than milk powder did not affect its success in clinical trials – a dramatic 81 percent of children reached and maintained a healthy height-to-weight ratio, similar to standard Plumpy’nut recipe success rates – and lowered its cost by 30 percent.

“It’s a bit like using a tank to get somewhere when you could get there in a Jeep,” Manary says of using Plumpy’nut for moderately malnourished kids. But if the spread can be reformulated and distributed more widely at a lower cost, he says, international agencies will be eager to use the high-powered remedy. “The amount of resources to go around the pot is limited, so if we can use them more effectively, we create more opportunities, and we reach more people.”

Why a dollar buys more junk than food.

Is there a problem with Plumpy Nut for those with “peanut allergies”?