Evon Hekkala wrestles crocodiles, one gene at a time 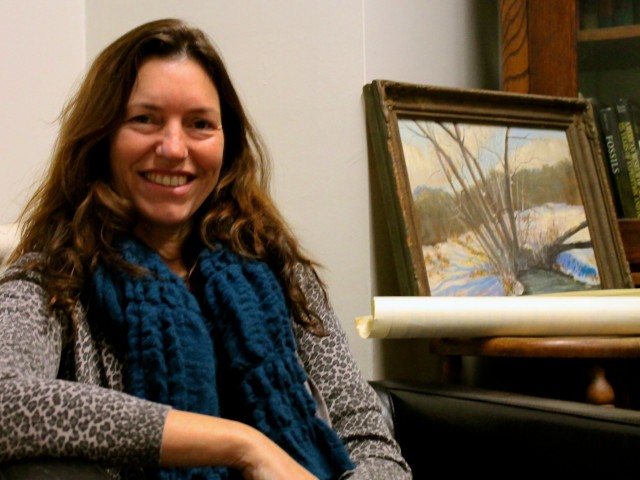 I thought stingrays were harmless, so how did one manage to kill the “Crocodile Hunter?”

“Do you know how to tell crocodiles and alligators apart?” Evon Hekkala picks up a crocodile skull and points to a curved notch in its upper jaw. “For crocodiles, the tooth is always on the outside.”

It’s clear that crocodiles hold a certain fascination for Hekkala, a behavioral ecologist at New York’s Fordham University. In her bustling lab, the shelves are lined with crocodile skulls, teeth and the bony plates that lie beneath their scales. Her young daughters like to sort the plates by size when they visit her lab.

Hekkala, who calls herself an “accidental conservation geneticist,” studies how species evolve. Using DNA samples from museum specimens, including animal mummies, she’s made some incredible discoveries, like finding the “extinct” Vegas Valley leopard frog living in Arizona. And a few years ago, Hekkala showed that the Nile crocodile, the largest and most common crocodilian in Africa, was actually two species and not one.

Hekkala, 50, grew up in Truckee, Calif. She wanted to be a stockbroker when she was a teenager, but by the time Hekkala went to Sonoma State University in Northern California, she had switched her focus to art history. To fulfill a science requirement, Hekkala took a course in the history of evolutionary theory. It changed her life. “I just loved it,” she says. “I felt like everything was so logical and clear.” She ended up graduating with a degree in anthropology.

As an ecology and evolutionary biology graduate student at Columbia University, Hekkala traveled to Madagascar to study red ruffed lemurs. But the lemurs were hard to find, because local people loved eating them. After 90 miles of trekking across the country, she returned to the U.S. with only four samples.

“I came back and had no dissertation project,” Hekkala says. Then George Amato, one of her graduate school advisers, gave her a choice between two bags. One held lynx samples from the Rocky Mountains, and the other samples of crocodiles from Belize. Hekkala chose crocodiles. In addition to looking at the samples from Belize, she decided to find out if crocodiles in Madagascar were also unique to the island, like so many other species there.

Amato, director of the Sackler Institute of Comparative Genomics at the American Museum of Natural History in New York, vividly remembers Hekkala’s enthusiasm as a graduate student. He says he is grateful that she ended up studying crocodiles. “She’s made some very significant contributions to our understanding of crocodilian evolution.”

Hekkala decided to study DNA from Nile crocodiles all across Africa so she could characterize the entire species. But she couldn’t travel to all of their habitats. “I didn’t want to go out and wrestle 600 crocodiles,” she says. “Not that I mind wrestling a few crocodiles.” So she found crocodile samples from museum collections instead.

Hekkala also used a source that few might consider: 3,000-year-old crocodile mummies from the National Museum of Natural History in Paris. She took samples the size of a grain of rice from seven mummified crocodile tails and added them to her pool of 82 DNA samples.

“This is my way to time travel,” Hekkala says.

When she analyzed the DNA, Hekkala got a shock: the Nile crocodile, Crocodylus niloticus, was in fact two distinct species.

The idea that Nile crocodiles in Africa actually belonged to two separate species wasn’t new. In 1807, French naturalist Geoffroy Saint-Hilaire looked at a mummy sample from the same group that Hekkala would study later. He detected differences in skull shape, geographical distribution and behavior, and proposed a new species named Crocodylus suchus. But his famous colleague, naturalist Georges Cuvier, didn’t agree, and C. suchus was never approved as a new species.

Thanks to modern DNA techniques, Hekkala was able to show that Saint-Hilaire had been right all along. The two species even have a different number of chromosomes: C. niloticus has 32, while C. suchus has 34.

“I felt incredibly confused at first,” says Hekkala. “I was a Ph.D. student and I felt like, what do I know, this has to be an accident. So I redid it 16 times.”

Now Hekkala hopes to get a DNA sample from the same mummy that Saint-Hilaire used to describe C. suchus. If it matches the new species, she’ll be able to submit the name to the International Commission on Zoological Nomenclature to get C. suchus its very own species designation.

Hekkala’s discovery may have important implications for crocodile conservation. Nile crocodiles are widespread and commonly killed for the leather industry, but the new species is less prevalent. These are “two different species with very, very different evolutionary origins and very, very different conservation needs,” says Michael Blum, a molecular ecologist at Tulane University in New Orleans who collaborated with Hekkala on the Nile crocodile project. He says genetics is “an incredibly important and powerful tool” for conservation management, and countries need to reevaluate their strategies for protecting crocodiles.

While Hekkala’s research is largely focused on protecting crocodiles now and in the future, she is also interested in their past. In collaboration with George Amato, her next project is to figure out why native horned crocodiles in Madagascar went extinct when humans and Nile crocodiles both arrived on the island around 2,000 years ago.

Despite her obsession with crocs, Hekkala is researching all kinds of other creatures too. Her lab at Fordham analyzes DNA from snow leopards, monitor lizards and chipmunks. Her lab is a flurry of eager graduate students and undergrads she snatches away from the university’s pre-med program. They are all on a mission: to use genetics to see how species have changed over time and to use that information to help shape conservation strategies.

Hekkala has a way of spreading her passion for conservation genetics to others. After she talked about her research to the Secret Science Club, a lecture series in New York City, several people emailed asking to work in her lab. “We have to create the conservation army,” says Hekkala. With her infectious enthusiasm, she just may do it.