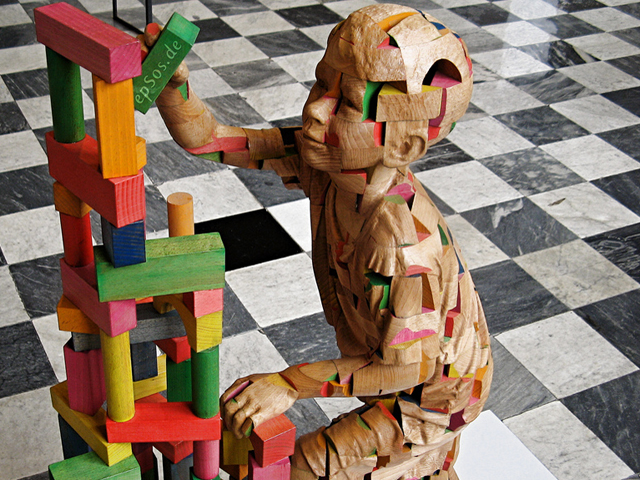 “How was your date last night?”
“A total flop! While he went to get popcorn, I snatched a hair from his jacket and ran it though my PocketSeq – he’s BRCA1 positive. I don’t want to have children who will have to face breast cancer.”
“Oh no, you should have checked him on GenMatch – I have the app!”

Ever heard that conversation on the subway? Soon, you may.

Breakthroughs in genetic research that have already revolutionized the way diseases are diagnosed and treated will soon permeate consumers’ lives, changing the way we think of ourselves, our identity, and our biological citizenship, a diverse panel told a New School audience at a Sept. 26 event in Manhattan.

The four speakers – an anthropologist, a psychologist, a bioethicist and an artist – each view the rise of personal genomics through very different lenses, but agree that the rapid development of genetic testing, sped by the internet, is altering conceptions of identity. Handheld devices that can analyze entire genomes based on a tissue sample (“PocketSeq” in the fictional subway dialogue above) are coming, and so are dating services that recommend matches based on genetic compatibility (the fictional “GenMatch”).

Many Ashkenazi Jews are already comfortable consulting genetic databases when considering potential mates, according to anthropologist Jessica Mozersky, a post-doctoral fellow at The New School. Mozersky’s recent book deals with the social implications of genetic testing in the Jewish community. She says they hope to reduce the likelihood of having children carrying genetic mutations in genes such as BRCA1 and BRCA2, which raise the risk of breast and ovarian cancer.

“I found that people were comfortable with the idea that their identity is not only defined by tradition but also by a common ancestors, who lived in small villages and married-in a lot,” explained Mozersky. “They accepted that genetic diseases may come with that history.”

New School psychologist Lisa Rubin worries about the agonizing choices prospective parents are already facing thanks to genetic testing. “Would my mom blame herself for giving me breast cancer?” she recited. “Would it prevent her from having me?” Rubin talks with her patients about diagnostics before and during pregnancy and the option of prophylactic breast removal to minimize the risk of breast cancer.

These conversations will become routine, predicts Dr. Robert Klitzman, a bioethicist at Columbia University, who also spoke at the New School event. “In the future, we will ask patients: ‘Do you want to know if your children have chances for autism?’ and we will tell them,” he said. “But there will always be doubts.”

In his recent book, Klitzman describes 64 personal dilemmas that have confronted pioneering consumers in the post-genomic age. Amid all the excitement and concern over genetic testing, people often forget that having a genetic predisposition for a particular disease doesn’t necessarily mean the disease is inevitable. “We can’t even confidently predict the weather for more than 24 hours in advance – how can we predict our lives?“ he asked.

What worries artist Heather Dewey-Hagborg are the invasions of privacy wrought by genetic testing. To dramatize her point, she created a provocative art project with the help of GenSpace, a public lab in New York. She first collected DNA-bearing objects thrown away by unsuspecting New Yorkers, like chewing gum, cigarette buds, and hair.

She then isolated DNA from these samples and created portrait sculptures loosely based on the genetic material. There was, of course, artistic exaggeration: the approximately 50 genes she analyzed give broad indications about facial features – brown eyes, for example, or flat noses – but not the fine details necessary for an accurate portrait. Even so, Dewey-Hagborg said, the sculptures are a powerful way to drive home her concerns about “the potential for a culture of genetic surveillance”.

All four speakers agreed we’re not there yet but we should start thinking about how to deal with genomic data in our all day lives. Klitzman concluded: “The question is no longer if, but how much are our genetic profiles defining us?”