I thought stingrays were harmless, so how did one manage to kill the “Crocodile Hunter?” 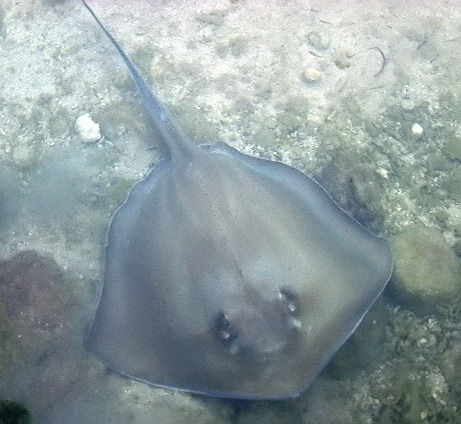 A stingray off the coast of Florida. [CREDIT: ac4lt]

For a man who made his living tangling with some of the most ferocious creatures on Earth, Steve Irwin met his end at the hands of an unlikely suspect. Irwin was filming a documentary off the coast of Queensland, Australia, on September 4th when a short-tail stingray swimming below him suddenly speared him through the chest with its dagger-like tail spine. The poisonous stinger punctured Irwin’s heart, killing him almost instantly.

The short-tail stingray, Dasyatis brevicaudata, is a huge and normally docile fish. The largest of all stingrays, the short-tail can grow up to 14 feet long and tip the scales at more than 750 pounds.

Typically regarded as inquisitive but wary fish, all stingrays are armed with at least one serrated venomous spine at the base of their whip-like tails. Short-tail stingrays possess two tail spines: a slender spike in front of a huge jagged bayonet. The ray that attacked Irwin plunged its rear tail barb, reportedly close to eight inches long, into his chest.

Stingrays harbor these weapons for one purpose: protection. Tail spines are an effective deterrent to predators, like sharks, that commonly target stingrays.

Fatal stingray attacks on humans are exceedingly rare. Only two have been reported in Australian waters since 1945. Both victims were stung in the chest, like Irwin. Worldwide, death by stingray is similarly rare, with only one or two fatal attacks reported each year.

But non-fatal stingray attacks occur frequently in shallow waters worldwide. These usually involve unwitting waders who step on rays nestled into the sand, hiding from predators. These types of attacks—some 1,500 per year occur in U.S. waters alone—are rarely ever fatal, though the pain from stingray venom is said to be excruciating. Little is known about the specific chemical properties of the short-tail stingray’s poison, but in general, stingray venom is a potent cocktail of neurotoxins, enzymes, and the neurotransmitter serotonin, which restricts smooth muscle contraction and slows blood circulation and subsequent dilution of the venom.

In Irwin’s case, the physical damage to his heart likely killed him before the toxin ever had a chance to take effect.

Australian police representatives, reviewing footage of Irwin’s final wildlife encounter, have suggested that Irwin was not harassing the stingray that killed him and that the attack was unprovoked.

Like most other stingrays, short-tail stingrays, also called smooth stingrays or bull rays, spend most of their time gliding over the ocean floor in search of the clams, fish, or crustaceans to eat. The wave-like undulations of their flattened pectoral fins propel them gracefully over the seabed and draw the attention of divers and snorkellers in the waters of the Indian and West Pacific Oceans.

If and when the video footage of Steve Irwin’s death is released to the public (see this week’s Scienceline Poll), the circumstances surrounding the fatal stingray attack can be more fully scrutinized. Until then, the attack is being characterized as a freak accident and a tragic end to the life of a dedicated conservationist.

Good article, Bob. I suffered a stingray’s barb going through my foot and it was incredibly painful. We treated it incorrectly until my college roomie ran up to a fire station to ask for first aid (we were stuck in traffic en route to hospital) – they sent her back to the car with HOT water: venum needs to come out, not be frozen with ice packs. That change of temp on my foot was painful, too!
And to ruin the entire vacation, antibiotics require a cessation of alcohol consumption…. bummer.

in a recent counseling lesson, i was working with a child who was perseverating about the death of the crocodile hunter. I cut my losses and allowed him to search the net for relevant articles, and yours was selected. Trying to gain some educational value, i asked him to read aloud and to tell me who wrote the article. The child said your name. Interesting that a former rickshaw driver can make it all the way in the big apple. Mazel tov on your accomplishments!

i have a hard time believing the stingray wasn’t harassed. Steve harassed wildlife, snakes, etc they were all clearly stressed out. This guy was in the entertainment industry not truly into conservation industry.

Plus there’s the fact that Steve pulled the barb out of his chest – if he hadn’t done that, he may have survived long enough to get medical help. Another man was in the exact same situation a month or two after Steve died; because he didn’t pull the barb out, he didn’t suffer sudden and intense internal bleeding. Anything that gets stabbed into an organ acts as a cork; it will plug the wound and stop massive internal bleeding long enough to get help. If you pull it out, you’re dead.
I recall the news reports stated that he was swimming over the top to the ray. It’s sad that a father and husband died; however as a conservation and environmental biologist, though I do support Steve’s goals, I can’t agree with his methods. There are strong laws that determine how close you and your crew/equipment can get to wild animals when filming them; I can safely say he broke every one at least once. Good intentions, but those laws are there for a reason.

Superb, what a blog it is! This web site gives helpful information to us, keep it up.

From what I understand, Steve was holding the end of the Stingray tail and mouthing to the camera “Crikey” when the peaceful creature attempted to swim away at which point Steve tugs on tail, mouths “This will rrreally piss ’em off..” Stingray turns to Steve and camera, says, “Yelp!” then dispatches Steve for constantly disregarding the animals-reptiles/amphibians/name it, he was supposed to have such a profound respect for.
Anyway, that’s what I heard.. Oh, and the Stingray struck him “hundreds of times”.. Jesus that camera man must have been ssso high or he is ssso full of excrement.

The ray was cornered because Irwin was on top and the camera men surrounded the ray so that it had no where to go.

As Shanti said he was known for harassing wildlife! I’m sorry for his family but he got his just deserts! Obviously the word had spread among the wildlife world and as others have pointed out this animal was being harassed. This is not like other videos of people swimming with stingrays wonderfully and with respect in Baja California. This was an attack, as were Steve’s usual antics.

“He got his just deserts”? Steve might have not been perfect in his methods but you are saying he deserved to die? Sympathy to the Irwin family.

I’m sorry but no one deserves to “Get his just desserts” that was cruel and not a single person should die. He has a family,a daughter, why would anyone say something like that! Shame on you †

Firstly I am just going to add he never pulled no stingray barb out of his chest the camera man that was with him even stated that. And all you disrespectful cunts saying he deserves to be dead well I wish I could say the same about you. And lastly people who say he was more in the entertainment industry he didn’t profit from it he invested all his money back into preserving animals. My god people need to educate themselves and do a little research before they comment.

I love how I asked google how often people die from stingray attacks and, from the whole blog post, it knew exactly which paragraph to read out loud with the answer.

I loved Steve Irwin’s genuine enthusiasm for conservation, which I wholeheartedly share, but do believe Steve often stressed out the animals he was trying to corral and film. In one of his Galapagos excursions he had to be told a number of times, by a Galapagos preserve ranger, to give more space to the critters he was trying to encounter. It’s clear to regular viewers that he routinely did this, with no one around to tone down his hyper kinetic pursuit of his subjects. I am very sorry Steve died in this way, for him and his family and friends. But, being so enthusiastic, he raced to get on top of this sting ray, in chest deep water in order to get the exciting video. The innocent ray instinctively reacted to Steve as a predator, likely a tiger shark about to attack. I’m sorry this happened but Steve Irwin, with his genuinely good intentions, invaded the space of a wild being again, and this time it caught up with him. His vital conservation mission will continue, through his family and through people around the world who share his loving values for the earth.

RIP Steve Irwin. It was virtually inevitable that some creature would take his life. It’s just hard to believe it was a stingray. His time on this Earth was apparently up.

It is amazing to see his son carry on the family tradition. His son is SO very professional and a pleasure to watch just like his dad was.

Steve Irwin was absolutely not harassing wildlife, though it may seem that way. He was a daring man who made educational wildlife videos for the Australia Zoo.
His last words were, “I’m dying”, and prior to his death, many articles say that he knew he was going to die. Steve Irwin had no intentions on stressing out any of the animals, however, almost any animal (even domestic) has the potential to be stressed around humans or particularly unknown people.
This stingray was stressed and was in attack mode because it thought steve’s shadow was a shark shadow, one of its predators. Out of defense, the stingray attacked Steve Irwin thinking he was a shark.
Steve did nothing wrong to this animal, but unfortunately, this creature brutally killed him.

I would like to see the video. Steve was an interesting guy but he was living on the wild side (pun unintended) and it is what it is. Stingrays are beautiful creatures, I spotted one in the bed of shallow waters in the Indian ocean in the Maldives.

It is truly a nice and useful piece of information. I’m satisfied that you shared this useful information with us.
Please keep us up to date like this. Thanks for sharing.

I am regular reader, how are you everybody? This piece of writing
posted at this web page is truly good.

Just from reading some of these comments, too many people are ignorant Of the facts. Only the cameraman was there, and he witnessed a freak accident not caused by harassing the stingray.

Steve was a conservationist who tried to teach people about nature. Without people like him ( and now his family) we would have even more ignorance than is being demonstrated by a few here.

People are going to say negative things about anyone that’s great. Typically because they’re jealous or have not accomplished enough in their lies. I’ve even heard Christian pastors say if you don’t have people hating you then you’re not doing a good enough job.
I love that guy he was an amazing show me a naturally good with animals. Just want to say I’m sorry he’s dead but if you died doing something you got it is truly not a tragedy. He truly lived balls out awesome and I admire him for it. Any of us should be so lucky.

how did you do that