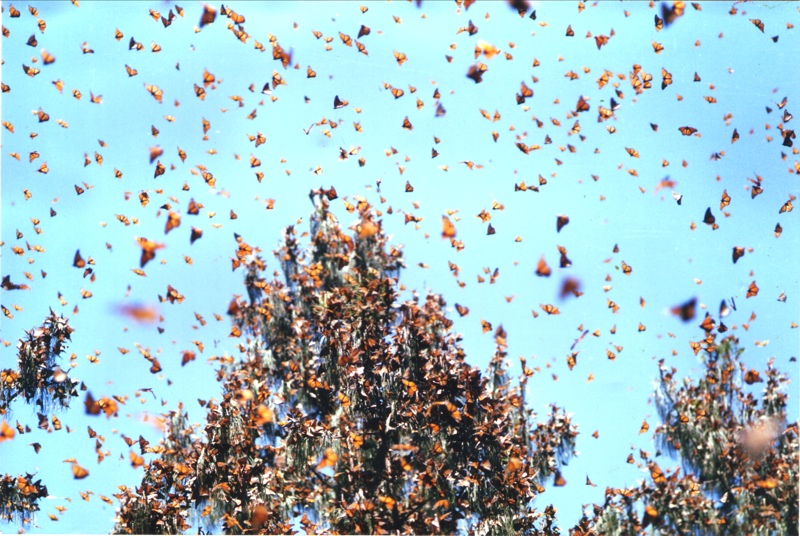 In 1975, amid the oyamel trees of the Michoacán forest in Mexico, a 25-year-old woman made the first public discovery of where monarch butterflies go for the winter. Research associate Catalina Trail, then Cathy Aguado, and her partner tagged and tracked monarchs for several years before locating the roosting insects— found flitting and sitting at 10,000 foot elevation— in the fir trees aside a mountain clearing, reads the August 1976 National Geographic article detailing their discovery. Trail and her team, led by zoologist Fred Urquhart, were certain the monarchs were migrants because among the millions of live and dead butterflies found down south, at least one bore the white tag the team had secured upon their monarchs earlier that year in Canada.

“I believe the monarchs overwinter in this chosen area,” writes Urquhart in the 1976 article, “because it provides suitable conditions at the terminus of their naturally converging migration routes.” Suitable conditions, no doubt, meaning warmer temperatures. To escape the impending cold each fall, many monarch butterflies take an ambitious flight from eastern North America to central Mexico. But as Trail and her team witnessed, not every butterfly arrives at the same time and some never see Mexico at all.

According to a recent study, the butterflies that survive the migration and arrive in Mexico first are not a random bunch. These early migrants tend to have larger and more elongated and vibrant red wings. In comparison, late arrivals and mid-journey fatalities seem to be those that are smaller on average and have both shorter and dimmer wings. The recent finding is consistent with prior research that found monarchs with deeper-colored wings fly further on average than those that are more yellow. Bird studies have shown that wing length and shape can affect migration speed, but as for wing color, the connection between a more vibrant hue and a faster flight is not yet clear.

Whatever the explanation, it’s impossible to ignore the radiance produced when the brightest butterflies fly together in Michoacán, Mexico. In fact, it may have been the colorful wings of the early arrivals that made the first Mexican sighting so spectacular: “Then we saw them. Masses of butterflies – everywhere!” writes Urquhart about his first view of the wintering monarchs. The monarchs, he writes, “filled the air with their sun-shot wings, shimmering against the blue mountain sky and drifting across our vision in blizzard flakes of orange and black.”