If you want people to conserve, you’re going to have to convince…me 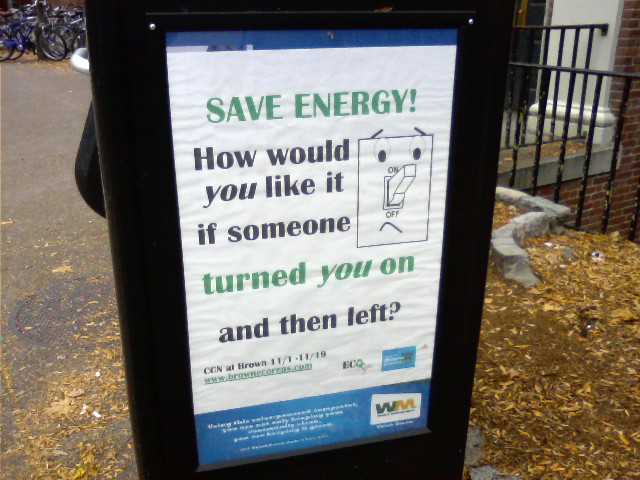 I am a fiercely lazy person. I don’t care much about the environment and I’m not afraid to shuffle awkwardly away when the topic comes up in discussion. I will grumblingly hang onto a recyclable bottle for a bit if I can’t find a bin — longer, if I’m with someone who might judge me — before giving up and throwing it in the trash, and I carry a reusable water bottle with me all the time except when I forget. When I stumble shower-ward in the morning, the absolute last thing on Earth I think of is saving water.

In theory, I support conservation of resources. Of course I do. But something gets lost between that noble goal and the pull of countless environmental efforts asking for attention, and my infinite laziness takes over. This is a truly bad thing: everyday decisions by me and people like me have a huge impact on global resources, and that impact will only increase: The number of plastic bags Americans throw away per year is fifteen times the number of people alive, and we each use on average two barrels of oil a month and 100 gallons of water a day. So in a world inundated by never-ending campaigns promoting recycling, conservation of resources like water and avoidance of extra waste like anti-bottle efforts, is there anything at all that will get me involved? I think there is, but it takes a bit of social psychology to explain why.

I’ve seen three major strategies used to encourage me (and the rest of society) to conserve resources: ethical appeals, economic appeals, and social appeals. It probably won’t surprise you that trying to court my conscience doesn’t work. In fact, studies suggest that solely ethical appeals rarely show concrete results and trying to guilt people into action produces a lot more guilt than action.

Economic appeals certainly have the power to get me on track — after all, I bought and started using a reusable grocery bag (most of the time) when the local grocer started charging for paper bags. It’s tempting to assume that economics trump everything, especially as a current graduate student. But I’ve learned a little about the human mind, and I’m convinced that social appeals offer the strongest chance of getting people like me to go along with a campaign — and wooing them into considering further conservation.

First, some general psychology. There’s an old trick salespeople use called Foot-in-the-Door that has been successful at promoting conservation efforts. Essentially, someone asks me for something small, like signing a petition for a cause. Then, when the cause asks me to do something bigger later like put an ugly sign on my lawn, I’m far more likely to agree. Psychologists speculate that I’m observing my own behavior and concluding that I’m the sort of person who supports that cause.

Like most humans, I am constantly putting myself into categories based on my behavior. If I save money, I think of myself as thrifty, and I’m likelier to save in the future. The catch is, not every environmental cause can be monetized. Not everyone will take the leap from picking up litter for extra cash to picking up litter because it’s a good thing to do — I know I wouldn’t. And if I’m skipping environmental efforts that don’t pay, I will always be adding points to the “thrifty” category and ignoring the “conservationist.”

Social appeals — like knowing what my neighbors are using energy-wise — will have a similar effect to economic benefit: I’ll do it, if it isn’t too much work. But unlike economic appeals, most everything can be socially encouraged. That’s the beauty of it: Recycling once because everybody does makes me more likely to recycle again, but it also leads me to compare myself in other ways — is my energy consumption as low as my neighbors? Does my pile of trash tower awkwardly over theirs?

If environmental groups help define my sense of self, I will begin to think of myself as an environmentally conscious sort of person. Before I know it I could be counting carbon footprints, remembering reusable bags, and maybe even saving scraps for compost with the best of them. The more I do those things, the more work I’m willing to do for them. I’ll see the social elements of all environmental campaigns and be drawn in by them — and maybe someday I’ll actually care about the environment more than I like avoiding extra work. It would be a truly mighty accomplishment by the flood of campaigners trying to change my behavior — and one that can’t be done without focus. Because unless all of those campaigners’ various requests are grounded in social appeals, they begin to feel like a laundry list of a million things I should be doing — and I absolutely hate laundry.