Insects are highly nutritious and easy on the environment; could they be the next super food? 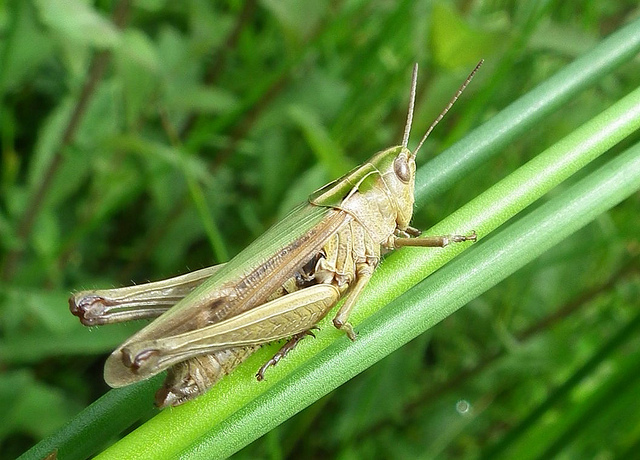 This grasshopper could be your next high-protein, low-fat snack. [Image credit: Flickr user anneke1998]

Food for Chickens, Poison for Man

Even if you don’t live on a farm, there’s probably a nutritious, eco-friendly meal for you right now in your backyard – or scurrying around the kitchen floor.

Insects are one of the world’s super foods hiding in plain sight. Crickets, spiders, locusts, caterpillars, grasshoppers and even termites are high in protein but low in fat and carbs. And unlike beef, chicken or pork, they don’t need lots of water, food or space. The only thing stopping these creatures from becoming a mainstream staple is cultural disdain.

“Whatever you think you’ll taste when you eat a bug, you’re probably wrong,” says Mark Siddall. He should know. An invertebrate zoologist at the American Museum of Natural History, Siddall has traveled the world for his research on categorizing leeches and parasites. Along the way, he has sampled local cuisines including everything from chapulines (Mexican grasshoppers) to Hercules beetle larvae. He spoke about his acquired taste for insects and their potential benefits at an October 14 Secret Science Club North event at Manhattan’s Symphony Hall.

More importantly, insects have incredible nutritional value packed into their tiny bodies. According to Siddall, a 100-gram serving of large spiders — that’s about 20 spiders in case you want to try this at home — has more than 100 percent of the daily-recommended amount of protein. (Just be sure to remove their fangs first.) Grasshoppers and crickets are also high in protein, as well as iron and calcium.

Animal protein has similar health benefits, but requires far more resources and space to cultivate than insect protein. A pound of beef requires 12 pounds of feed and 5,000 gallons of water; a pound of crickets only need 2 pounds of feed (anything from crushed cat food to sweet potatoes – they’re not picky) and a gallon of water. Pound for pound, insects have a much smaller impact on the environment than most meats.

So why do we respond to bugs with shoe heels instead of salivary glands? Siddall hypothesizes this response may be learned; children in Western cultures see adult parents panic over spiders and may internalize that behavior as a result. He also acknowledges, however, that it may be an important evolutionary trait to avoid toxins found in certain insects, like cantharidin in the aptly-named Blister Beetle.

Can Americans and Europeans be convinced to fall in love with bug cuisine, as eaters in Thailand and Mexico already have? Siddall thinks so. “It already happened with lobsters and oysters,” he said, noting that 200 years ago both were considered repulsive.

With enough positive press, backyard bugs could be delivering healthy, environmentally-friendly nutrition to the masses.