Some hard science on sexism in academia

An op-ed in the New York Times argues sexism in academia is over, but it's off the mark. 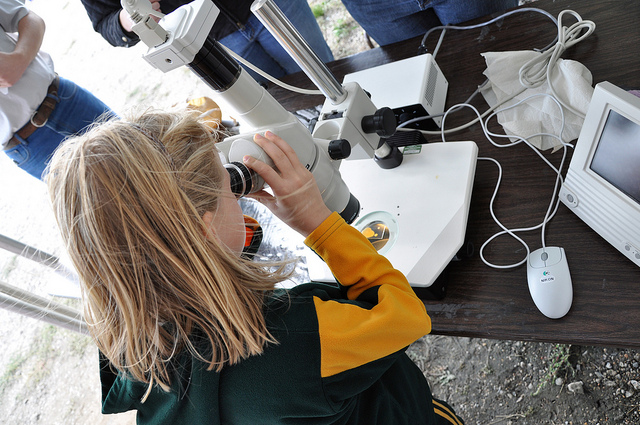 A young girl looks through a microscope at North Dakota State University. Today, the scientific workforce, including academia, industry and the government, is one-third women, according to the National Science Foundation. [Image credit: Flickr user David Haasser]

To most women in academia, that’s absurd. I started reading this column in the paper, and abruptly stopped because that’s not what I, or any woman I know, experienced.

I was relieved to see the blogosphere buzzing with emphatic objections, but no one has yet touched on one of the strongest counterarguments: hard evidence refuting this irrational claim.

The authors of the op-ed, Wendy M. Williams and Stephen J. Ceci, base their argument on a recent study they conducted. They assert that this gap between the number of men and women in academia is no longer due to an inhospitable work environment for women. But they’re off the mark; in 2013, women earned half of the bachelor’s degrees awarded in science and engineering and 38 percent of doctorates, but they only made up 26 percent of tenured faculty members. The explanation that Williams and Ceci offer for why women are still dropping out of the professional race is weak: that too much is being published about inhospitable workplace environments, and it’s putting women off.

There has to be a different reason why this leaky pipeline exists in the first place, namely documented disparities and discouragement. A 2012 study noted that 60 percent of women who left science and engineering did so because of the lower pay or lack of opportunities for promotion. Other studies have highlighted the subtle bias against women that both sexes exhibit when hiring. In another 2012 study researchers found that when science faculty members were presented with resumes that were identical except for the candidate’s gender, the male candidates were more likely to be hired, paid more and offered mentorship. And in a study published January 2014, hiring managers were more likely to hire a man to do a math test than a woman, even when the woman scored higher on the test itself.

Williams and Ceci point out that a greater number of women are entering and staying in the sciences today, which we should celebrate. Flexible hours and longer maternity leaves make academic life easier for women to balance their home and professional lives, and women recognize this. But many of these same perks hold true for men who are trying to do the same thing; today, about as many male as female Millennials cite “being a good parent” as one of their highest values.

Despite general steps in the right direction, most people still believe that academia is hostile for women — because for the most part, it’s still true. Several fields in particular are still lagging behind in numbers. In 2013, only 20 percent of the physical scientists in the U.S. earning doctorates were women. For engineers, that number was 13 percent.

As many men “aren’t right for science” as women, but are they ever told that? The societal pressures from families, teachers and friends conditioning men and women to pursue different fields are so subtle that we often overlook them. Williams and Ceci argue that the real barrier for women in science occurs long before women enter college, and they’re right. Even parents are unknowingly guilty of encouraging their sons to pursue science more than their daughters. In a widely cited 2003 study in Developmental Psychology, most parents assumed their sons were more interested in science than their daughters, and used more complex scientific language with their sons accordingly. Williams and Ceci assert that in higher education, gender discrimination is no longer a major concern. But why would anyone assume that discrimination would just magically melt away once someone turns 18?

Sexism at universities may not be as pronounced as it once was, but it’s still an issue — ask any woman. When I was an undergraduate, men would automatically assume that I wouldn’t take the lead on group projects in physics class. Guys would make “jokes” that women can’t do science, and other men found it funny. My female roommate took dozens of engineering courses, but only one was taught by a woman. These experiences weighed on me, as hard as I tried to brush them off. Female scientists are sometimes frustrated by the buildup of these subtle slights, and they shouldn’t be happening at all. In order to tackle the grand challenges of our world, we will need the best scientists possible. Discouraging half the population from pursuing this career — however implicit this dissuasion may be — is not the way to progress.

Universities in which 7 to 15 percent of full professors are women, as Williams and Ceci contend, aren’t bastions of equality. And they can hardly show that sexism in academia is dead. These numbers don’t reflect the women who received their doctorates more recently, but as long as women feel ostracized from academia, the disparity will persist.

Telling the world there isn’t a problem doesn’t make it go away. Even saying, “It isn’t as bad as people think,” sets us back. From birth through school to employment, young girls need encouragement to pursue whatever field they wish to enter. We must keep telling women they’re smart enough to be scientists, because they are.