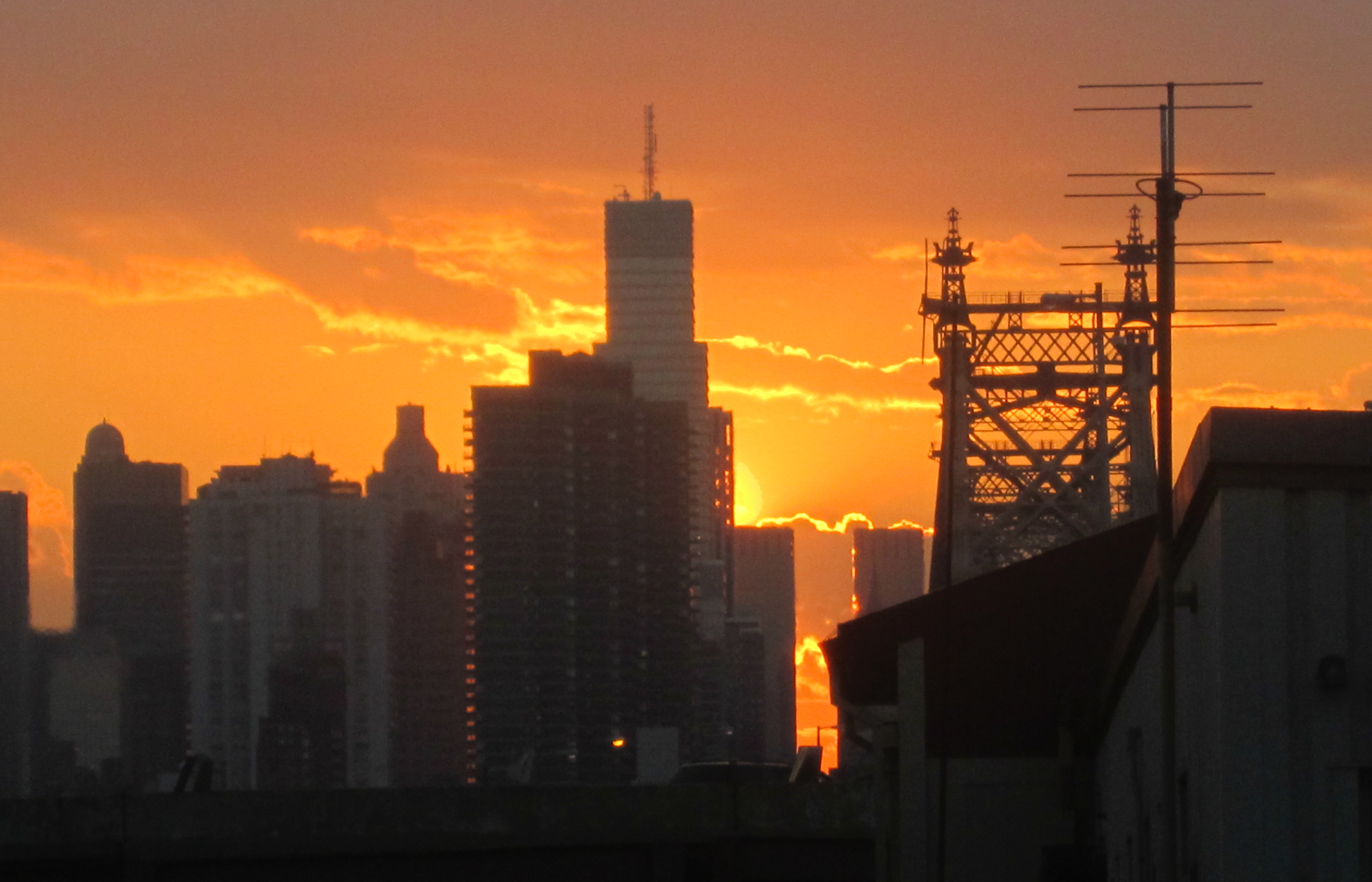 Sticky heat waves like the one that struck New York City in 2011 are magnified by the urban heat island effect. [Image credit: Flickr User Chris Goldberg]

When Stuart Gaffin looks out at the New York City skyline from atop his green roof research station, the Columbia University climate scientist imagines that the hundreds of towering buildings around him are the trunks of giant kapok trees gracing the Amazon sky.

“Can we take areas of the asphalt jungle of New York and can we turn them into green oases?” Gaffin asks rhetorically. “That’s not happening quite yet … but that’s always been my and my colleagues’ vision: Trying to bring this into areas that are not green.”

Gaffin is no dreamy tree-hugger. He’s a data-mining scientist who collects temperature measurements and soil samples from Manhattan streets, alleyways, rooftops and even prisons to better understand an increasingly dangerous problem that climatologists call the urban heat island effect.

Urban heat islands form elevated temperatures in densely populated neighborhoods with black tar roofs and other impermeable materials like asphalt. Heat maps and studies indicate that underserved communities in cities deprived of cooling centers and green spaces may be even more susceptible to the effect. Cities cover less than two percent of the Earth’s land surface, but Gaffin sees them as crystal balls that will foretell the future of global climate change and our responses to it.

City heat is already a threat to many. In some cities, temperatures can soar up to 22 degrees Fahrenheit higher than in nearby suburban or rural areas. Heat waves are already responsible for more deaths than any other form of extreme weather. And a robust collection of research suggests that elderly, children, racial minorities and the poor — populations that tend to live in close quarters — will be most at risk as heat waves become more common due to climate change.

Urban heat islands may perpetuate themselves by leading to more energy usage. Already, cities are responsible for 75 percent of global carbon dioxide emissions. Urban heat islands indirectly drive global climate change by hiking energy demand on hot days, says Brian Stone, a city regional planner at the Georgia Institute of Technology. This past February, a new report from the New York City Panel on Climate Change predicted that extreme weather events, including heat waves, are going to increase with global warming. By 2020, the panel predicted, the number of days at or above 90 degrees may increase by more than 50 percent compared to the records before 2000.

New York City will have a warmer, wetter climate similar to cities in Virginia today, says Timon McPhearson, an urban ecologist at the New School for Social Research. Climate in New York City is not the same as it was 30 years ago, and it will continue to change in the coming decades, McPhearson explained. He said, “You need to be thinking, ‘Where are the hottest neighborhoods?’” A teeming, diverse metropolis like New York will need responses tailored to specific neighborhoods especially those where residents are most at risk.

Thermal satellite images of New York City show that Northwest Brooklyn, East Harlem and South Bronx — all communities that are racially and economically diverse — are some of the hottest neighborhoods in the city. “Those I would identify as hot spots, and as hot spots for need [of extra attention],” McPhearson said.

Predicting just how much hotter specific urban neighborhoods will get as the climate warms is tricky, according to Leiqiu Hu, who measures the intensity of urban heat islands at the National Center for Atmospheric Research in Boulder, Colorado. She is currently trying to understand urban temperature differentials by compiling satellite data from past extreme heat events, including the 1995 Chicago heat wave responsible for more than 750 heat-related deaths, most of whom were elderly, poor and racial minorities.

Though the exact nature of the urban heat island effect varies geographically, scientists think there are certain ways of fighting heat everywhere. To Columbia’s Gaffin, green roofs are one obvious response. Roofs make up about 10 to 15 percent of the land area within a city, or approximately 22 times the area of Central Park in New York City. Gaffin has been working on converting traditional black tar rooftops, which can reach a scorching 170 degrees on hot summer days, into green havens in steamy areas of the Bronx and Harlem.

Plants on green roofs drink up rain, convert it to water vapor during photosynthesis and release it, forming a water column that cools the air. The layer of vegetation acts like a sun sponge, soaking up some of the heat that would otherwise flow through the roof and into the building. Green roofs are great carbon sinks: a 1,000-square foot green roof can remove up to 40 pounds of pollution and carbon emissions, and can be 50 to 60 degrees Fahrenheit cooler than typical roofs, according to a report by the U.S. Environmental Protection Agency

In 2009, Gaffin set up a green roof at the Ethical Culture Fieldston School in the Bronx that is now covered with little succulent plants. This roof is similar to the one atop Chicago’s City Hall that saves the city about $3,600 in heating and cooling bills.

But green roofs are not everywhere yet. There are approximately one million buildings in New York City, and just under 400,000 have green roofs, according to a 2012 industry survey. They’re not easy or cheap to maintain. At today’s prices for intensive green roofs, creating a roof the same size as the 20,300-square foot roof atop Chicago City Hall would cost more than $500,000. A conventional tar roof the same size would be half the price.

Still, there are other initiatives cities can take to mitigate heat. New York City’s PlaNYC green initiative, adopted in 2007, has planted close to a million trees through the MillionTreesNYC project and has also cleaned up 500 brownfields and turned them into neighborhood pocket parks. Chicago, the site of the 1995 heatwave, has several green infrastructure initiatives, including installing cool permeable pavement in alleyways and constructing green roofs.

Even smaller cities like Louisville, Kentucky, have made an effort to increase cooling systems after a 2012 study by Georgia Tech’s Stone that identified it as the U.S. city with the fastest growing urban heat island effect. Louisville’s Urban Heat Island Project is collecting temperature data across the city to generate a comprehensive heat management plan that will recommend neighborhood-level strategies, such as reducing heat waste from energy consumption. “Heat doesn’t sound like something you can manage, but you can,” Stone said.

For now, the risks associated with hotter summers are a particular problem for cities, but Columbia’s Gaffin makes the point that eventually all communities — large and small, urban and rural — will be feeling the heat. While they may make summer days unbearable, urban heat islands give scientists a way to see what future climate conditions may be like. Scientists and policy-makers are gradually transforming places like New York, Chicago and Louisville into living laboratories: Places to field-test ideas that will eventually be applied everywhere.

“[Cities] are a very important test case for how we are going to go forward on the issue of global climate change,” Gaffin said. “When we built cities … we didn’t think about what they were doing to local climates. We control the land surfaces, and what we put down everywhere in the city is under our control and affects the surface temperature.”

I have often wondered why not use the outsides of tall buildings, to hang solar pannels, but also let in light, all that wasted surface area and a one way systrem. Am I talking rot here, or could future skyscrappers make ther own electic power? Again, any comments please. Thank you for any answers, and very sorry for dumb questions.