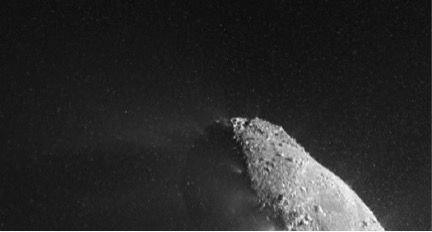 Little balls of dust and ice small enough to hold in the palm of your hand may be the building blocks of planets as large as — and larger than — Earth. For decades, astronomers believed that planets formed from the collisions of asteroids and comets. Yet there have always been flaws in this theory.

“It is difficult to model planet formation because there are so many variables that can prevent [planets] from forming,” said astrophysicist Katherine Kretke of the Southwest Research Institute in Boulder, Colorado. Astronomers have known “since as early as the 1970s that the current, accepted theory of planetary formation was flawed,” she added. Kretke summarized the new theory for planetary formation in two steps. First, the pebbles form from dust and ice, then they clump together to form comets, asteroids and other similar objects known as planetesimals. The leftover pebbles are then accumulated by the largest of these planetesimals, which grow and eventually form the solid core of planets made mostly of gas, like Jupiter and Saturn.

When the NASA’s unmanned EPOXI spacecraft flew by the comet Hartley 2 in November 2010, it observed “pebbles,” one- to 10-centimeter balls of ice and dust, floating around the comet’s center. Ever since, astronomers have been struggling to reconcile the size and composition of these pebbles with the current theory of solar system formation. Kretke and her fellow researchers at the Southwest Research Institute linked the pebbles to a new theoretical model for planetary formation, and published their findings in the journal Icarus in September 2015. They propose that these small pebbles are the building blocks of the planets in our solar system, not just comets and asteroids.

Michael A’Hearn, an astronomer at the University of Maryland who has worked with NASA but was not involved with the study, says the new theory could revolutionize the field of planetary science.

Some scientists, such as Jürgen Blum at the Braunschweig International Graduate School of Metrology in Germany, are actually conducting laboratory experiments to replicate the conditions of pebble formation on a smaller scale — in other words, to make their own pebbles. These experiments support the pebble theory of planetary formation. However, scientists need more data from future space missions before they understand the nature of these supposedly primordial pebbles, says A’Hearn.

Astronomers are optimistic that those new missions will be coming soon.

According to A’Hearn, NASA will announce a new round of mission proposals to look at comets once Congress finalizes the budget by December 11, 2015. If one of these missions can nab a piece of a comet, some very lucky astronomers might get the opportunity to hold one of these mysterious pebbles in their hands.