Her test has a sophisticated design, but isn't ready for production 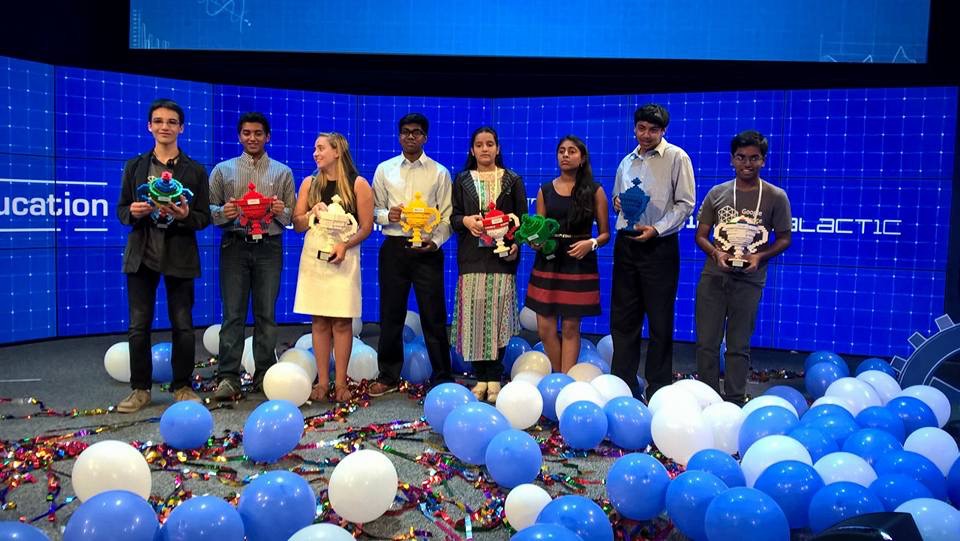 Olivia Hallisey, third from left, shared the stage with other finalists at the Google Science Fair in September 2015. She claims her winning project can detect Ebola virus in people who are not showing symptoms, but this is a questionable claim. [Image credit: Wikimedia user Shrijagannatha under Creative Commons 4.0 License]

If you ask high school students how they spent their summer vacations, very few of them would tell you they spent it researching deadly diseases. But for her grand prize-winning Google Science Fair project, Olivia Hallisey did just that. At this worldwide competition, the 17-year-old from Greenwich, Connecticut, impressed judges with her method for stabilizing the components of a standard Ebola test so they could remain unrefrigerated for longer periods of time. While Hallisey’s project is above the level of most high-schoolers’, it is unclear whether her test is ready to be used in the field.

On her poster, Hallisey claims that her test improves upon existing Ebola diagnostics in multiple ways: it has a longer shelf-life, is cheaper ($25 per test compared with $400+ for the existing test), more portable and can detect Ebola virus in patients who are not yet displaying symptoms. News outlets such as CNBC and Tech Insider have praised her project as an important innovation. CNBC’s Brian Sullivan called the test “very important.” Yet according to Robert Garry from the Viral Hemorrhagic Fever Consortium, a partnership of research institutions that fight diseases like Ebola, there’s an important difference between designing a test that sounds impressive and designing one that works well. “As far as the science fair type of competition, this is great, but putting one of these tests in the field is a whole different set of problems.”

In her presentation, Hallisey, who did not respond to requests for comment, claims that this test improves upon the existing Ebola detection technique — enzyme-linked immunosorbent assay. ELISA, which is often the first step in diagnosing a viral disease, detects the antigens associated with the Ebola virus. The test materials for ELISA must remain refrigerated from the time they are manufactured until the time they are used, and are only viable on the day they are mixed together for testing. For these reasons, ELISA has some serious drawbacks in rural areas where reliable access to refrigeration and electricity are not guaranteed.

Hallisey’s new test uses the same enzyme reaction to detect Ebola antigens, but she devised a way to extend the shelf lives of the reaction chemicals involved. She embedded the mixed solution in a specially designed fiber made from silk protein on each single-use Ebola test device, which comes as a small card. By doing this, she extended the test’s shelf life from one day to one week. If Hallisey’s claim is true, this shelf-life could make a big difference when considering the challenges of transporting tests to rural areas as a rapid crisis response, Garry says.

Hallisey says in her presentation that her test improves on the enzyme-based Ebola testing, and that it can be done with a saliva sample in 30 minutes, compared to 12 hours for ELISA. It can also be used with little training, whereas ELISA requires a lab technician.

But it may not be poised to make the impact that some news outlets have predicted. Lauren Cowley, a Ph.D. student at Public Health England, says that ELISA has been surpassed by more advanced tests. During her time working in Sierra Leone during the Ebola epidemic in 2015, Cowley tested a rapid kit, which is also based on antigen detection, that she says delivered results in 20 minutes and could be operated with little training. “The difference between that rapid kit and Hallisey’s,” Cowley said, “is it is stable at room temperature for far longer than a week, so it can be kept on the shelf for long periods of time.” A 2015 field evaluation of this test concluded that it could be used as a test to confirm whether a person has Ebola, but this has not yet been confirmed by further studies.

In addition to these concerns over the test’s shelf-life, Garry doubts Hallisey’s claim that this test can detect Ebola in people who are not showing symptoms of the disease. “That would require very high level of sensitivity to find whatever antigen you’re looking for,” says Garry. “Polymerase chain reaction tests, which are very sensitive, don’t make that claim, and I don’t think they’ve ever been shown to do that.” Hallisey was not able to try her test on people who are not showing symptoms. She has only tested it with Ebola proteins, so at this point her claim is unsubstantiated.

Does this mean her project does not live up to the media hype? Apparently so, according to researchers who have experience with Ebola diagnostics. But at least one judge on the grand prize panel thinks it still deserves attention and praise. Mariette DiChristina, editor-in-chief of Scientific American and one of the Science Fair’s judges, says that the project’s capacity to make an impact is one of the competition’s five judging criteria. “To me, ‘make an impact’ could be about the science, or it could be about inspiring other students. Even if it’s never applied, it’s still something lovely.”

DiChristina is not alone in thinking that this project has merit. Garry agrees that there is always room in the field for more innovation. “Rapid tests are something that should’ve been deployed earlier,” he says. “If we’d had tests like this in the field a year ago, the outbreak would not have gone on this long.”