Why reducing our carbon footprint means changing our cement 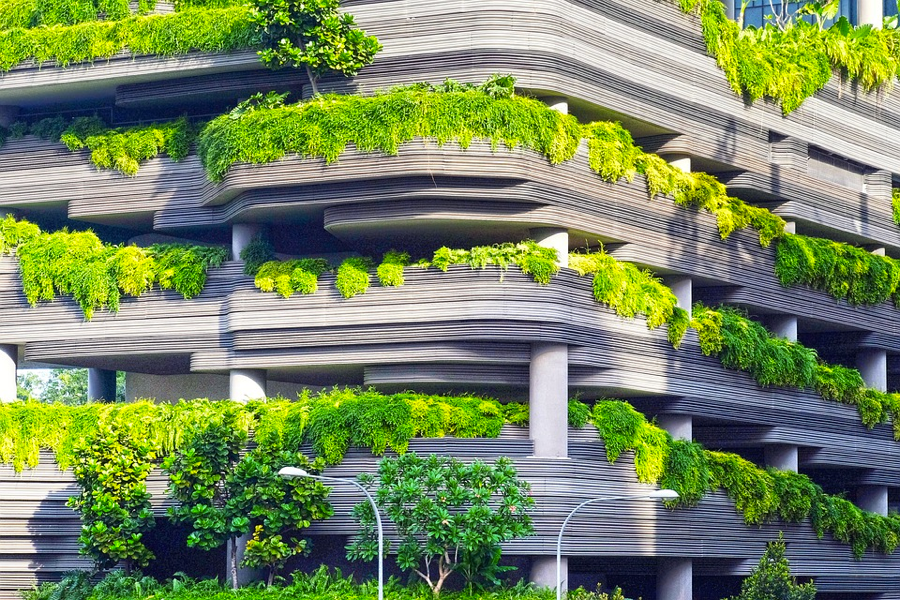 You don’t need to eat local

Though cities from Houston to Shanghai rely on traditional Portland cement-based concrete, Jannie van Deventer has a better idea — just don’t ask him to tell you the exact details. He keeps the formula of his Zeobond E-crete secret, but the South African entrepreneur thinks his greener alternative can make a huge impact on a planet where concrete production is responsible for a surprisingly large share of global greenhouse gas emissions.

“We’ve constructed dozens of buildings in Australia and South Africa with Zeobond E-crete,” says van Deventer, “and they’ve all been successes.”

Van Deventer isn’t the only one looking to change the way we conceive concrete. As governments worldwide try to cut greenhouse gas emissions wherever they can, concrete production looms as an increasingly important target. It causes more than 5 percent of all manmade carbon dioxide emissions — more than aviation and almost as much as deforestation. But weaning the world off Portland cement is a major challenge because the industry is propped up by an extensive manufacturing and regulation infrastructure. Overcoming it could prove more difficult than toppling the gasoline-powered internal combustion engine, and would require public interest and support that has been lacking so far.

“Concrete is not a sexy topic,” says Ulrich Dewald, a researcher at the Karlsruhe Institute of Technology in Karlsruhe, Germany. People would rather talk about a shiny new electric car than changing the chemical composition of a cement block to reduce carbon dioxide emissions, he says.

Concrete is an ancient technology. The Romans used it to build roads, aqueducts and buildings — many of which are still intact thousands of years later. Made from a mixture of cement paste and rocks, it is strong enough to build the tallest skyscrapers, the longest bridges and the widest highways. It’s cheap and accessible too: you can pick up concrete mix at your local home center for only about twelve cents a pound.

Pound for pound, concrete production doesn’t generate as much carbon dioxide as some other building materials, like steel. But we use so much of it — a staggering three tons per person annually, second only to water — that it’s a major source of greenhouse gas emissions overall, says Sabbie Miller. Miller is a postdoctoral fellow in civil and environmental engineering at the University of California, Berkeley.

Cement, the binding material that makes concrete stick together, is made by heating a mixture of calcium carbonate (limestone), silicon, aluminum and iron to 2,700 degrees Fahrenheit. Both the fossil fuels burned to heat the mixture and the resulting chemical reaction release large amounts of carbon dioxide, a greenhouse gas that contributes to global warming.

So researchers across the globe, like Claire White, a professor of civil and environmental engineering at Princeton University, are working on ways to make concrete production cleaner, especially the manufacture of Portland cement.

The Portland cement mixed into conventional concrete is manufactured as clinker, concrete chunks roughly golf-ball sized or smaller. For every ton of clinker produced, approximately one ton of carbon dioxide is released into the atmosphere, so White is looking for alternatives to traditional clinker. 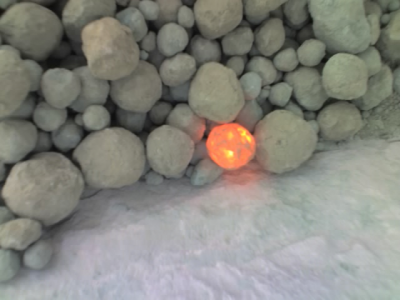 One way to reduce carbon emissions is to use cement made from leftover byproducts of steel production, such as coal-derived fly ash and blast furnace slag, says White. These cement-like materials are called “geopolymers,” a term coined in the 1980s by French materials scientist Joseph Davidovits, a pioneer of sustainable concrete and founder of the Geopolymer Institute.

An American cement company called Lone Star Industries hired Davidovits in 1983 to invent a lower-pollution cement; the result was the geopolymer Pyrament. But Pyrament did not succeed “because the construction codes did not allow for the use of this new type of cement,” says Davidovits. To be permitted for use in the International Code Council’s building and construction regulations, a building material must be proven to have long-term durability. It needs to “last more than just five, ten or even twenty years,” he says.

But proving long-term durability takes years, of course, so builders overwhelmingly choose the traditional option, Portland cement. The only chance for innovation is if countries adopt performance-based standards that are based not on durability or material composition, but on a series of tests aimed at assessing strength. Australia has switched to such standards, which is why van Deventer’s Zeobond E-crete is finding a niche there. Now he and other entrepreneurs are pushing for similar reforms of construction regulations elsewhere.

“Industry standards are inhibiting innovations, and it is hard to compete against the billions invested in the Portland cement industry,” says van Deventer, who is a civil engineering professor at the University of Melbourne in Australia in addition to his entrepreneurial endeavors.

The sustainable cement business is very competitive, so van Deventer keeps the precise recipe for Zeobond E-crete secret, but he insists that “you don’t have to use Portland cement to have good, sturdy construction.” The cost, he says, can vary by a factor of three from country to country, based on the availability and price of source materials. If source materials cost less than Portland cement in a region, then Zeobond E-crete is cheaper there, but if the opposite is true, it is more expensive.

But the best news is that making Zeobond E-crete emits significantly less carbon dioxide than producing an equivalent amount of Portland cement. Because Zeobond E-crete uses only 10 percent Portland cement clinker, with the rest recycled byproducts of industrial production — the total reduction in carbon emissions is theoretically 90 percent.

A major concern about geopolymer-based concrete alternatives is microcracking. As geopolymer-based concrete dries over time, microscopic cracks can form, allowing moisture to seep in and rust the steel beams underneath, weakening and eventually collapsing the structure. Though van Deventer claims this isn’t an issue with Zeobond E-crete, the same isn’t the case for many other similar products, according to Princeton’s White.

White’s team at Princeton has found that they can reduce microcracking by adding a small amount of zinc oxide nanoparticles (a billion of them would fit on the head of a pin), at very little additional cost — less than a one percent increase.

Ultimately, keeping costs down is essential to expand the market for concrete alternatives, and so is building an infrastructure to sell them, according to van Deventer. “Without an investment in sustainable infrastructure,” he says, “all the innovation in the world means nothing.”

This article was written by someone with very little experience or understanding of concrete construction and concrete materials. Today few specifications require the exclusive use of portland (yes, not capitalized) cement meeting only the requirements of prescriptive specification like ASTM C94. Use of supplementary cementitious materials such as fly ash and ground blast furnace slag are commonplace in concrete mixtures. Also non portland cements meeting performance specifications like ASTM 1157 are allowed in may applications and water reducing admixture are used to reduce the amount of cement used in many concrete mixtures

As for Pyrament cement, it can best be charactized as an interesting new product with many more shortcomings than simply code acceptance. It was introduce with much marketing hype in an effort to save failing company. Performance cost and its unpredictable performance lead to its failure in the marketplace.

The primary purpose for building code requirements is life safety. Unless a building material has a proven record of predictable performance in the field its use in real buildings should be approach cautiously, irrespective of its color.

A few comments on an interesting article. (1) Portland cement and Portland cement concrete are universal technologies that are well understood and performance is predictable. Geopolymers are not a universal technology and may vary with the nature and proportions of the by-products and activators used – hence likely performance variability like the micro-cracking reported in one place but not another; (2) the carbon dioxide emitted in the manufacture of Portland cement is well known and rigorously measured and reported. Similar rigour needs to be used in assessing the level of embodied carbon dioxide in geopolymers. When this occurs fanciful claims like a 90% reduction relative to Portland cement will not be used as a justification for geopolymers. There is a significant reduction – let’s properly understand the amount. (3) The claim that Australia has moved from durability-based concrete standards to ones based on strength is simply incorrect. Strength is critical but so too is durability performance. (4) Wagners have led the way in the practical application of geopolymer concrete in significant projects in Australia and provide an example of how this innovation might be progressed in the commercial world.

Nice Read! Let me ask you was this data collected with an (Ag)Sliver tube.

I hope all is going well with you

This reminds me of when I lived in China. They had many beautiful roof top gardens, and although many days were often filled with grey polluted skies, at least it seemed they were trying to reduce the carbon foot print by the large planting projects going up through out the cities!

It is really true that there are different types of concrete invented by some companies in UK that are compact, strong, and cement free. This type of concrete could completely transform the construction industry. Thanks for sharing this useful post with us!

Almost sounds too good to be true. Where I am concrete is still used a huge amount, which, being a concreter I’m not complaining about, but for environmental reasons a greener alternative could be just what the doctor ordered. Let’s see how it pans out.

As someone who has been doing concrete for over 30 years, I’d be happy to see a greener alternative but can tell you that customers (at least in our rural area) won’t pay more for a greener product. Hopefully the environmentally friendly options are greener in more ways than one!

I wonder how this product would hold up around constant water and chlorine. We do pool deck repairs and concrete resurfacing which can take a beating when clients overuse chemicals.

what a great article! Thank you so much for sharing

“concrete is not a sexy subject” Gotta love that line, but thank you for sharing a well thought out article! It’s interesting to know that there’s so much more to concrete and how it’s been used throughout history.