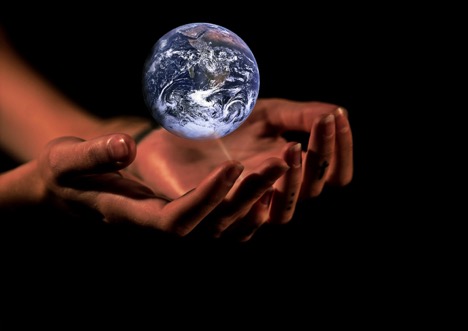 It may be much, much bigger than we are, but (at least metaphorically speaking), we hold the future of the planet in our hands, Bill Nye says in Unstoppable. [Image credit: Pixabay user cocoparisienne | CC0]

Bill Nye’s latest book, Unstoppable, is a compelling follow-up to his previous one, Undeniable. In Undeniable, Nye underscored the importance of science and science education, imploring people to face the facts and accept that evolution is a proven biological process that should be taught in school. In Unstoppable, Nye warns about the inevitability of climate change if we do nothing, but he also makes numerous suggestions about what we can do to stop it.

The subtitle, “Harnessing Science to Change the World,” sums up Nye’s point: We desperately need alternative energy sources to the fossil fuels that are destroying our planet, and they aren’t just going to fall into our laps. We are going to have to develop alternate energy sources, make them better, and ultimately replace fossil fuels through scientific research and discovery.

The book is full of personal and professional anecdotes from Nye’s life, and given his background as an engineer, he offers a very practical take on climate change and the importance of alternate energy sources. Nye enumerates the virtues of various alternative energy sources, like nuclear and solar power. But he also elaborates on how implementing changes to these sources of energy on a large scale could be achieved (and is achievable). Rather than spend the whole book arguing against climate change deniers, he does something far more productive than complain: He offers constructive criticism.

Besides containing a practical call to action, the book was entertaining and educational, much like watching Bill Nye the Science Guy on PBS in the mid-90s. From Unstoppable, I learned that Arnold Schwarzenegger — who I will forever foremost identify as a time-traveling robot — helped build an enormous solar power plant in California during his time as governor. I also learned that birds and bats die from flying into wind turbines, and that engineers are working on ways to make the turbines louder, so that the birds and the bats will be able to detect them and avoid dying. Although Nye doesn’t give exact numbers for how many birds lose their lives to wind turbines, he says if you compare them to the number that die as a result of the coal industry, it isn’t very significant. I would have liked some numbers, but I’m willing to take his word for it.

The book was a smooth, pleasant read. Nye does an excellent job of explaining alternate sources of energy, including wind and solar power, and addressing the strengths and weakness of each. As I was reading, I was hard for me not to see his character from Bill Nye the Science Guy, wearing a blue lab coat and explaining everything with unbridled enthusiasm.

Like Nye’s last book — also edited by Corey S. Powell — the language and tone of Unstoppable is very conversational, sometimes a bit too conversational for my taste. Certain verbal fillers that might make sense in spoken conversation (particularly “ums,” which occur several times throughout the book) do not translate very well to the written word. But, that’s really my only complaint.

The title of the book may seem to refer to the probability of devastating climate change, if we don’t take action. But in the final chapter, titled “The Unstoppable Species,” it becomes clear Nye is talking about us, humans. He makes reference to the World War II generation, dubbed by Tom Brokaw as “The Greatest Generation,” and suggests that if we find a way to limit further climate change and reduce our dependence on fossil fuels by switching to cleaner sources of energy, we could become “the Next Greatest Generation.” Whether the generation that grew up with Bill Nye the Science Guy takes his advice as adults remains to be seen.