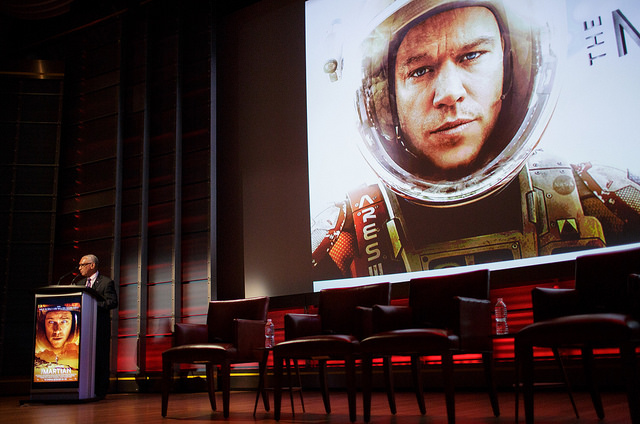 In the film “The Martian,” stranded astronaut Mark Watney has to use his wits to stay alive without supplies. A life-support system being developed by the European Space Agency aims to solve that problem. [Image Credit: NASA/Joel Kowsky | CC BY-NC-ND 2.0]

If only marooned astronaut Mark Watney, hero of the hit movie “The Martian,” had something like what the European Space Agency (ESA) is cooking up, he would never have had to ration those potatoes.

For years, the ESA has been trying to solve the problem of recycling in space. Recent breakthroughs here on Earth will allow them to test their systems in space in the near future on the International Space Station (ISS), where the challenge of re-using waste is still an unsolved problem.

On the ISS, current life-support systems can process urine with a charcoal-like filter and remove carbon dioxide with special synthetic rocks made of aluminium and silicon. But these systems cannot completely recycle what goes in. “If you recover water from urine you lose a lot of other compounds” like nitrogen, explains Christophe Lasseur. Lasseur is the manager of the recycling project known as MELiSSA, for Micro-Ecological Life Support System Alternative, which focuses on recycling waste into food. Initiated in 1989 by the ESA, the project now involves more than 40 institutions from Europe and Canada.

The ISS’s current systems cannot produce food either. Each astronaut on the space station needs 3.8 pounds (1.7 kilograms) of food per day to stay productive. At that rate, a crew of six on a six-month trip to Mars would need 4,104 pounds (1,862 kilograms) of food — unless they could grow some themselves. All that food would not only take up precious space, it would also add weight on a journey that would cost nearly $7000 per pound if carried by SpaceX’s Falcon 9.

“Right now, as far as we know, a biological system [that produces food] can be the only approach we have rather than stowage and resupply of food,” says Ray Wheeler, a NASA plant physiologist who is not involved in the MELiSSA project.

The MELiSSA project draws its inspiration from lake ecosystems. Microbes at the bottom of many lakes turn organic waste into usable nutrients for plants and also generate oxygen. Plants, in turn, serve as food for lake animals, which then generate waste to feed microbes. MELiSSA scientists aim to mimic these lake ecosystems by designing special devices to host each process and then connecting these devices together.

In July, researchers in Spain tested a version of this closed-loop system. For six weeks, three rats in an enclosed chamber lived on the oxygen produced by blue-green algae. The algae, in turn, used carbon dioxide the rats exhaled to perform photosynthesis and grow. “It is the first continuous demonstration of a closed loop,” says the lead scientist, chemical engineer Francesc Gòdia of the Universitat Autónoma de Barcelona. His team is analyzing the data for public presentation. 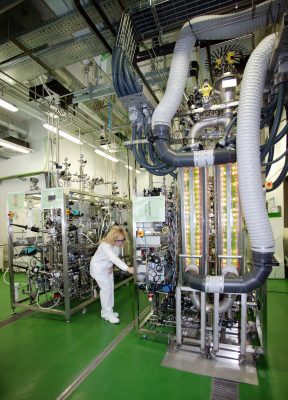 What part of MELiSSA looks like on Earth: a pilot plant at the University Autònoma
of Barcelona. [Image Credit: ESA | CC0 1.0]

Pulling off the same trick for humans on a year-long trip to Mars will be immensely more difficult. The MELiSSA researchers must understand every interaction intimately, according to Lasseur. “Assembling all the processes together is not just putting tubing between two or three machines. We need to go slowly, or it will never work.”

Despite the challenges, the MELiSSA team has made progress. “We do the puzzle piece by piece,” says Siegfried Vlaeminck, an environmental engineer at the University of Antwerp and Ghent University, who works on MELiSSA’s nitrogen recycling process. In a recent study, Vlaeminck used bacteria to recycle nitrogen in urine and shower water collected from college students. Ninety-two percent of the nitrogen was converted into nitrate that could be directly used by plants. Previous experiments have shown that these bacteria can also convert nitrogen in space.

In September 2017, Gòdia’s blue-green algae will get its first test in space, on the ISS. Scientists want to know if these algae will produce as much oxygen in an extreme environment of low gravity and high radiation as they do on Earth.

In some ways, MELiSSA is building on the plot of The Martian. In the movie, astronaut Watney, played by Matt Damon, jokingly calls himself “the greatest botanist on Mars.” Marooned on the planet, he survives by ingeniously turning his habitat into a potato farm nurtured by organic fertilizer he creates from his own urine and feces. The movie introduced millions of moviegoers to the challenges of surviving in space with limited food.

But real-life NASA botanist doesn’t think potato farming is realistic for the early Mars missions. “Everything is going to be incremental,” says Massa, who leads NASA’s Veggie project, which seeks to select the best edible plant to grow on the ISS, and eventually on Mars. So far, Veggie has tested red romaine lettuce on the ISS and will test Tokyo Bekana cabbage soon.

“The goal is to include plants [as a food source] in a closed loop system like MELiSSA,” explains Massa, who is not involved in the European project. But growing enough plants for food would currently require too much labor to be feasible.

So in the near term, we are going to be sending packages of food to Mars, according to Massa. Otherwise, she says, “to keep all crewmates alive, you would need one or two people whose full-time job is farming and cooking.” For a small crew busy looking for signs of life, “they may not have time to be potato farmers.”

That makes me remember a film with Bud Spencer. He is collecting money for the mafia. In a house of a mother, who says, that she has no money and no food for her baby. Her baby is sitting on it´s potty. Suddenly there is a “Plop”-Sound in the baby´s potty. Did the Baby shit a coin? The mother takes the obstacle out of the potty, rinses it under running water and puts it back into her baby´s mouth. No coin, no money – it was a peach kernel!