For some time after Earth’s formation, the outermost layer was a solid, unmoving shell. It may have been a billion years before the crust cooled enough to harden and crack apart into the tectonic plates we know today. [Image credit: Wikimedia Commons user | CC BY-SA 3.0]

Europa’s ice shell could be quaking

It’s called uniformitarianism: a leading school of scientific thought that says we can understand the past by observing and collecting data in the present. Within geology and earth science, it has a stricter definition: the processes that dictate how the earth behaves work the same today as they always have.

But is a uniformitarian approach really the best way to decipher the buried secrets of our planet’s past? That debate is both centuries old and as fresh as the March 9 edition of Nature.

You probably haven’t heard of this debate, but it says a lot about how science is done. And while both sides of the argument tend to be characterized as narrow, strict caricatures, the resolution seems to be somewhere in the shades of gray.

A study published in that issue of Nature suggests that in Earth’s earliest days, the crust — the thin, outermost rocky layer of our planet — was very different than today. Young Earth probably had one big unbroken shell that was still too hot and soft to crack apart into the rocky, fragmented crust we have now.

“You can think of it like making a crème brulée,” says Tim Johnson, a metamorphic geologist from Western Australia’s Curtin University. “You blowtorch the sugar and it forms a shell. And once it cools down you can break it with a spoon and it forms plates.” Johnson co-authored the new study but points out that he was not the first to propose alternative explanations for how the first continents were formed.

You may recall from high school that the earth’s crust is made up of twelve gigantic tectonic plates — huge shelves of rock that slide at an imperceptible crawl — bumping into and pulling away from each other. Well, these plates can face off at regions called subduction zones, which are hotspots for earthquakes and volcanic activity. When two plates collide, one will be pushed underneath into the mantle, the next layer of the planet, which will melt and recycle the crust over millions of years. And when two plates pull apart, the exposed mantle will rise and cool into the next generation of planetary crust. 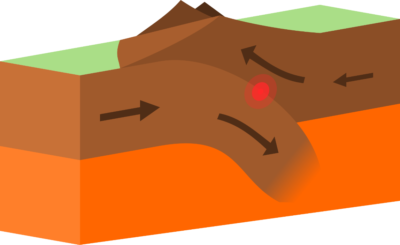 This is a simplified view of how plate tectonics work today, as a heavier plate burrows beneath a lighter, usually continental crust. But things may not have always been this way, says Johnson. [Image credit: Wikimedia Commons / domdomegg | CC BY 4.0]

Prior to Johnson’s work, the consensus within geology was that the Archaean crust — that is, the earliest crust that was formed in the earth’s youngest days 4 billion years ago and lasted until about 2.5 billion years ago — was regularly recycled in these subduction zones. The idea was that early rocks such as basalt would be repeatedly heated and melted during their trips into the mantle, eventually solidifying into the granite that dominates both the modern and Archaean crusts.

But when Johnson analyzed primordial basalts from some slabs of Archaean crust in Northern Australia, he found that the transformation from basalt to granite could not have happened from plate tectonic activity — the plunging of plates into the searing mantle, where they would melt and eventually ooze back to the surface, forever changed.

These changes in the rock are preserved in distinctive geochemical signatures of modern granites, indicating that they developed over subduction zones and giving rise to the uniformitarian idea that early granites must have also formed this way. But Johnson found a signature in the remnant precursor basalts suggesting that they too were formed from earlier basalts. This couldn’t have happened if plates were sliding around being forced into Earth’s mantle, he says. There must have been an extra step.

Johnson explains that the Archean crust was formed by a three-stage process, which would not be possible if plate tectonics existed because tectonics creates crust in two steps by destroying and recreating the rocks. “That is also incompatible with plate tectonics,” Johnson says, describing the creation of the Archaean crust.  His paper cites evidence that the full process takes about 300 million years, but modern plate tectonics can recycle crust on the scale of tens of millions of years, not hundreds. A different system must have been in place for these rocks to form as they did without interruption, he argues.

“I guess the big thing is we need to be a little more speculative about concepts, such as uniformitarianism,” says Johnson. “And just because particular rocks have a signature that resembles rocks produced in a known environment in the modern earth doesn’t necessarily mean they were produced in a similar environment.” 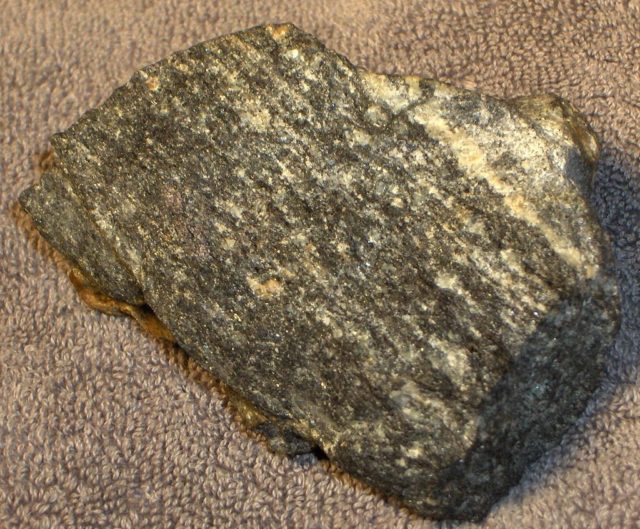 This four billion-year-old gneiss – a metamorphic rock that was once altered by intense heating – may not have formed via conventional plate tectonics [Image credit: Wikipedia / Mike Beauregard | CC BY 2.0]

But this isn’t a compelling challenge to uniformitarianism, says Markes Johnson, a paleontologist from Williams College who is a self-described “unapologetic adherent to ‘uniformitarianism.’”

“We still have a uniformitarianism view, we just don’t have granite,” he wrote in an e-mail, describing how modern basalt islands, such as Hawai’i, don’t transform into granite in the way Tim Johnson describes. But they are still products of the same environment, even if that environment has changed over time. Basically, Markes Johnson says that things — like how new landmasses are formed — have changed since the distant past, but the principles underlying Tim Johnson’s research and conclusions don’t contradict uniformitarianism.

Markes Johnson studies rocky shorelines in Baja California Sur and Western Australia, as well as in Siberia, China, Scandinavia and the Canary Islands made famous by the voyage of Charles Darwin — another adherent to uniformitarianism. He looks at fossil records to determine how rocky shore ecosystems behaved in their earliest stages from a uniformitarian viewpoint. Here, factors like erosion and wave shock matter just as much to coastal life now as they did back then.

“I can’t find any fault in this paper, but … he’s using uniformitarianism,” says Markes Johnson of Tim Johnson’s research, arguing that by applying current data — our understanding of how different minerals act under heat and pressure — to the past, he’s relying on uniformitarian logic. “He’s using the exact same principles, that things are today how they used to be.”

Markes Johnson agrees that 3 billion years ago, we did not have continents as we have them today, and that scientists need to explain how modern, granite-heavy continents came to be. But he argues that the solid shell idea doesn’t debunk uniformitarianism because he adheres to a broader definition of the term.

“Really what he’s saying is that we don’t see subduction [in the Archaean crust] as we see it today, but it doesn’t really violate uniformitarianism,” says Markes Johnson. He doesn’t agree with the common perception of uniformitarianism that says everything has to be exactly the same as it was. Rather, Markes Johnson feels that uniformitarianism is about making scientific observations and using them to look back and explain how the world has behaved and changed over time.

“The key word is empiricism,” he says. “You look at empirical evidence, so of course [Tim] Johnson is doing that.” While Markes Johnson’s definition of uniformitarianism is certainly less extreme, it seems indistinguishable from the scientific method as a whole.

Neither of the Johnsons is interested in a dramatic clash of academic philosophies. Rather, they both express similar goals of promoting a more critical approach to geology. Markes Johnson feels that much of the hyped perception of a polarized conflict or antagonism within science comes from the need for researchers to promote their work — describing a study as the groundbreaking new discovery that will end a debate will attract more readers.

Tim Johnson’s big hope for his research, rather than trying to resolve the broad theoretical debate over uniformitarianism, is instead simply to improve our understanding of how the world works. Often, geologists rely on computer models to analyze and predict planetary behavior. This reliance on modeling often brings them under fire, but earth scientists — especially those who research the distant past — often can’t run the sort of controlled experiments that researchers of other disciplines can do in their labs.

“We have such a fragmented record of rocks that go back to the period in which we’re interested,” says Tim Johnson, explaining why his field is so dependent on computer models. But by constantly refining the system’s inputs, he feels important research can be done. As more evidence accumulates from modeling, he hopes that his fellow researchers will stop assuming that the early crust must have formed above a subduction zone just because the rock samples bear subduction-like signatures. “Hopefully people will start to look more critically,” he says.

“There are many people who … would like the earth to have behaved in a plate tectonic way throughout its history,” says Tim Johnson. “And I hope we’ve convinced some of them to think in a new way.”