As people and animals clash in India, one researcher is experimenting with wildlife birth control 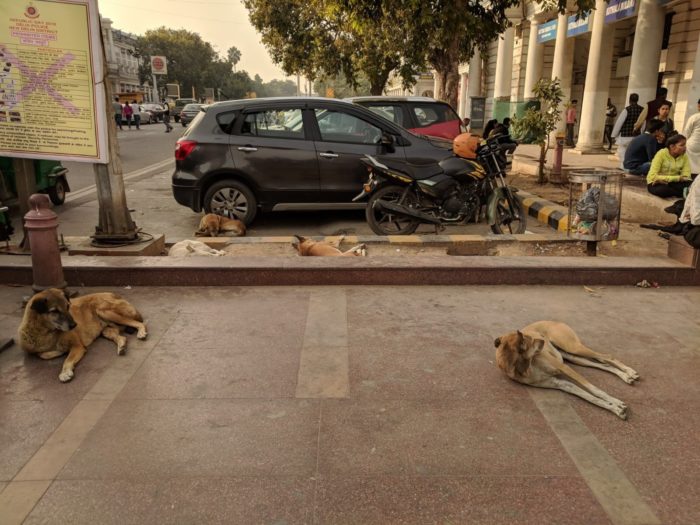 There are so many stray dogs in Delhi that the government has resorted to canine birth control. [Image courtesy of Karan Goel]

When Sukhdev Taneja heard a familiar rustling on the second floor of his home in Hisar, India, he grabbed his video camera and followed the noise. He enjoyed documenting the monkeys that crept into his home a couple of times every week and went about their business destroying pots or scrounging for food. He stepped into the room, expecting to find the usual monkey shenanigans. Instead, he met a low growling. These monkeys were angry.

Taneja ran downstairs to the ground floor, chased by five monkeys who looked ready for a fight. He slipped into a room and shut the door behind him. The monkeys continued screeching “like street dogs” from the other side, Taneja remembers. Terrified, he slowly opened the door a couple of inches, wedged the camera in the gap, and captured the hostile, crying monkeys on video, which he later posted on YouTube.

“I felt horrible,” Taneja says. “I was lucky that I didn’t get injured.”

Clashes like this are increasingly familiar in India, whose fast-growing cities now teem with wild and feral animals feeding off garbage produced by the booming human population. The consequences can be fatal: elephants and tigers alone are now killing more than one person every day, the Associated Press recently reported.

The large-animal attacks may make headlines, but they are just the terrifying tip of a much broader problem that involves everything from wild boars to macaque monkeys. In fact, there have been so many human-vs.-animal altercations in India that the national conversation about wildlife has flipped from conservation to population control. That’s according to Satish Gupta, who leads one of the latest efforts to control wildlife population at India’s National Institute of Immunology. For Gupta and his team, the most promising solution for decreasing conflict is to give animals birth control.

“This is one of the methods for which we have a lot of hope,” says Gupta.

The problems are as diverse as India itself. On the fringes of the southeastern cities, elephants are increasingly marching onto farms and destroying crops. In a recent study, three-quarters of over 5,000 farms surveyed reported wildlife had cost them an average of about $200 (more than 12,000 rupees, or about 16 percent of an Indian farmer’s average income, based on a 2013 survey). Many of those costs get rolled over to the government, who pays damage claims — though research has shown farmers aren’t consistently reimbursed for their losses.

In northern Indian cities, wild boars and monkeys are ubiquitous nuisances. In Delhi, street dogs have become particularly dangerous, as they spread rabies to people they bite. As many as 30,000 Indians die from rabies every year, according to a 2008 estimate by the United States’ National Institutes of Health. In addition, about 15,000 people are bitten in India each year, usually by dogs, and require shots to prevent rabies infection.

People, not animals, are driving the trend. Indian population growth has slowed somewhat to 1.2 percent annually, but the cities are still booming — they’re growing more than twice as fast as rural areas, according to the Indian census. And animals are following people into the city.

Under pressure to respond, the government has turned to experts like Satish Gupta. He spent decades researching how to control the human population by improving access to birth control in a country where gender and marriage norms can be formidable barriers. Now he is studying the urban animal problem.

Gupta speaks slowly, carefully. He’s a scientist, and he likes to get things right. When asked whether he’s hopeful his research will ultimately ease human-wildlife conflicts, he says, “We won’t know unless we do it — so we try.”

His team is building on wildlife birth control research from other parts of the world. In the U.S., deer have been tranquilized and vaccinated. Squirrels in Europe have been fed oral birth control. Helicopters circle South African elephants and shoot them with sterilizing darts. But in India, giving birth control to wildlife poses some unique logistical problems.

While the Indian government has tried surgical sterilization and capturing urban animals to relocate them to the countryside, neither method has effectively reduced the number of wild animals in cities. Contraceptives are a hopeful alternative — but a difficult one. With monkeys, for example, you can’t simply put birth control in their food; alpha males eat first, then other males, then the females, according to Gupta. They’re also tough to capture and inject with a contraceptive since they move around so much. This is especially important because the best wildlife birth control requires a couple of shots to begin with, and then a follow-up shot after a couple of years.

Right now, Gupta and his team are experimenting with slow-release drugs, so that they would only have to inject monkeys every four to five years. In street dogs, refining these injections would include an added benefit — they could simultaneously vaccinate for rabies, solving two problems with one shot.

Gupta is still far from bringing the injections to animals outside the lab, though. He hopes to have them ready in three to five years. “Until recently, it was not considered a serious issue in India — the increasing wildlife population,” he said. “Now, because of the increasing human-animal conflict, the government is giving it serious consideration.”

Once Gupta has refined the injections, he will need to confront some tricky ethical questions. Injecting wild animals with birth control deprives them of a fundamental behavior and life experience — reproducing and raising children, according to Becca Franks, an animal welfare scientist at New York University. Controlling the wildlife populations involves other sticky questions, too, says Franks, like determining what constitutes the right number of animals in any particular species’ population. She also worries about unintended consequences of sending drugs into the wild, although Gupta has stressed that injectable drugs wouldn’t contaminate the local environment.

Until recently, Hindu philosophy shielded some macaque monkeys from attempts to control their population — they were considered sacred, according to Gupta. As their population has grown, though, they’ve more frequently been considered vermin — a pest that you can kill. As people in India begin killing wildlife, sterilization might be the best option, Franks notes. But she stresses that, since the growing human population is partly to blame, animal welfare should be at the forefront of any solution.

“If we care about invasive species, we should sterilize ourselves,” she says. “We’re the worst offenders.”