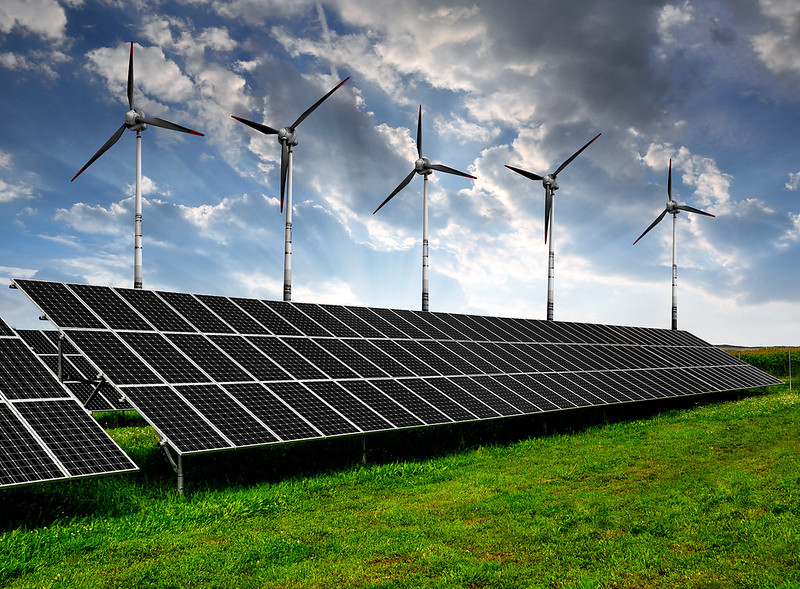 Facing the shortage of materials and safety hazards of lithium-ion batteries, researchers are making moves to develop other energy storage devices. [Credit: Aqua Mechanical/Flickr | CC BY 2.0]

When you’re trying to solve one of the most challenging problems in energy tech, inspiration can come from unlikely places — even a French pastry.

A plastic sheet folded like a croissant is one of the many ideas being experimented with, as researchers around the world develop new technologies to augment or even replace the lithium-ion batteries found in cell phones, laptops, and electric vehicles.

Long-lasting, light, and easy to recharge, lithium-ion batteries have been an important accessory for solar, wind and other intermittent power sources that depend on energy storage technology. In October, the inventors of the lithium-ion battery were awarded the Nobel Prize in Chemistry. But there’s a shortage of lithium-ion materials, as well as a need for longer-lasting, safer batteries in certain applications like renewables and robotics. Lithium-ion batteries degrade and lose energy storage capacity relatively quickly due to their constant high voltage. They also aren’t ideal for providing the bursts of intense power to machines such as what electric vehicles need, says Emiliano Bilotti, a material scientist and lead researcher of a recent battery project at Queen Mary University of London.

One idea that may help is the “croissant capacitor.” Bilotti and his Queen Mary team recently produced a record-breaking polymer capacitor — an energy storage device with a plastic insulating film — using the pressing-and-folding technique of a croissant baker. By taking a plastic film capacitor that’s roughly half the size of a Post-it Note and folding and pressing it seven times, the researchers stored 30 times more energy than in a commercially available polymer film dielectric capacitor.

Capacitors store less energy than batteries and release it much faster. So, while they don’t work as well as lithium-ion batteries for cell phones, which need long-term energy storage, they are well suited for electric motors.

“In a mobile phone, you don’t have to release energy very fast, but in an electric vehicle you have moments when you need to, and the lithium-ion battery is not sufficient for that,” explains Bilotti.

This fast release is needed in certain moments like accelerating very fast or braking, says Bilotti. Even though this fast release of energy is beneficial for electric cars, capacitor energy storage is still very low, which is why most electric cars operate on lithium-ion batteries, according to Wu Xu, an electrochemical material scientist at Pacific Northwest National Laboratory in Richland, Wash., who was not involved with the study.

But Bilotti hopes to change this by expanding the use of capacitors to applications, like electric vehicles, where energy storage and release is more of an issue. It’s not uncommon for a battery to be paired with a capacitor to compromise on energy storage and release, says Bilotti. Making a capacitor that both stores a lot of energy and can release that energy fast is the ultimate ambition, he says.

Bilotti got his croissant capacitor idea from his previous study in which he had used the pressing-and-folding technique to study certain mechanical, electrical, and thermal properties within a polymer. When he and his team decided to use the same technique to see how a pure polymer film would store energy, they found to their surprise that the folded film had the highest ever reported energy density for a capacitor, says Bilotti.

Bilotti’s croissant capacitors store 35 joules of energy per cubic centimeter, a big jump from the 1 to 2 joules for capacitors currently on the market. His most recent study on the croissant capacitor, published in March, beat that record. The capacitor can now store 39.8 joules of energy per cubic centimeter. That’s still a long way from the 900-2500 joules lithium-ion batteries can store, he says, but if the new capacitors are paired with lithium-ion batteries, they might be able to deliver more power faster to electric motors — providing more giddy-up to electric cars and other machines that need it.

Bilotti has partnered with Deregallera Ltd., a U.K.-based company doing energy storage research, to develop and eventually sell the croissant capacitor. He also hopes to pair it with grid-supporting solar panels and wind turbines, if his team can further increase the capacitor’s storage capacity.

Substantially increasing the energy storage of capacitors is a big challenge, says Xu. Lithium-ion batteries and capacitors could work together to provide both high power and high energy in applications requiring both, says Xu.

A flow battery is another new and promising energy storage device, according to Rhodri Jervis, a chemical engineer at University College London.

“If you want to store more electricity, you just build a bigger tank and that’s a lot easier than building a very large lithium-ion battery,” says Jervis. These tanks give flow batteries long-term storage and are easily scalable, says Jervis.

In October, a California-based team reported that they invented a new flow battery that can last even longer than its predecessors. Based on their research, these scientists think their grid batteries have the potential to last 10-20 years, says study leader Brett A. Helms, a material chemist at the Lawrence Berkeley National Laboratory in Berkeley, California and co-founder of Sepion Technologies in Emeryville, Calif.

This new flow battery uses a membrane made from polymers called AquaPIMs, which allows ions to pass quickly between the anode (positive side) to the cathode (negative side) of a battery while generating electricity or when storing charge, says Helms. This selectivity of the membrane not only improves the energy efficiency of the system, says Helms, but it also helps extend the lifetime of the battery. His flow battery model is available for licensing and collaboration through the U.S. Department of Energy Lawrence Berkeley National Laboratory’s intellectual partnerships office, meaning companies can commercialize and market this battery to the public.

Another good thing about flow batteries is safety, Xu says. He adds that these batteries are based on aqueous electrolytes, which means they are not flammable, unlike lithium-ion batteries that use non-aqueous and flammable electrolytes. Flow batteries could also provide low-cost energy storage because they are based on zinc and iron instead of much more expensive metals like vanadium, says Helms. Currently, ferro-vanadium (78% vanadium and iron mix) costs between $29-31k per kg, whereas zinc costs about $2 per kg and iron ore costs less than $1 per kg.

Flow batteries like his, Helms says, cost $200-300 per kilowatt. In contrast, lithium-ion batteries cost about $110 per kilowatt, says Jie Xiao, a battery materials scientist at Pacific Northwest National Laboratory who was also not involved in the study and conducted her Ph.D. work under Stanley Whittingham, the developer of the lithium-ion battery who received the recent Nobel Prize in Chemistry. That’s a significant price difference, but Xiao thinks there’s a possibility for flow batteries to get cheaper once they are more fully commercialized. She does not see lithium-ion and flow batteries competing with each other for grid storage applications.

“We should not replace one by another,” she says. “Flow batteries and lithium-ion batteries can complement each other for a better outcome for grid energy storage.”

Meanwhile, other researchers are taking on the challenge of looking for cheaper and safer materials to substitute for lithium-ion batteries. Options include zinc and sodium, among others, says Matthew Paiss, an electrical safety specialist at Pacific Northwest National Laboratory. Materials like sodium are more sustainable than lithium because they are more abundant in the earth’s crust, says Xu.

The main hazard with lithium-ion batteries is flammability: they can burst into flames when short-circuiting and release hazardous gases, says Xu. Paiss agrees but says that there’s always a trade-off between safety and energy density when using different types of batteries and energy storage devices.

Lithium-ion batteries have the highest energy density compared to other battery types today and are good for storing a lot of power in a small area, but there’s a higher safety risk than other battery types. Flow batteries are safer but have lower energy density, which requires more square footage to store an equal amount of energy as lithium-ion, says Paiss. Capacitors, meanwhile, can be flammable, depending on their electrolytes and voltage. While very few large energy storage systems are based on capacitors, Paiss says capacitors work well with mobile systems, like light rail trains.

Scarcity of raw materials from developing countries like cobalt from the Congo is also a big issue with lithium-ion batteries, says Xiao. Paiss agrees with that and says that cobalt is one of the greatest concerns.

“Material availability, recyclability, and access are always a concern,” agrees Paiss. “Cobalt has a lot of geopolitical concerns with how it’s mined and where it’s coming from.”

In all, more than 30 different countries supply material for lithium-ion batteries, according to the U.S. Department of Energy. In 2017, Australia, Chile, and Argentina produced 91% of all lithium, while 59% of the world’s cobalt was produced by the Democratic Republic of Congo, which has a history of political instability.