The early bird gets the worm. The night owl gets — worse health? 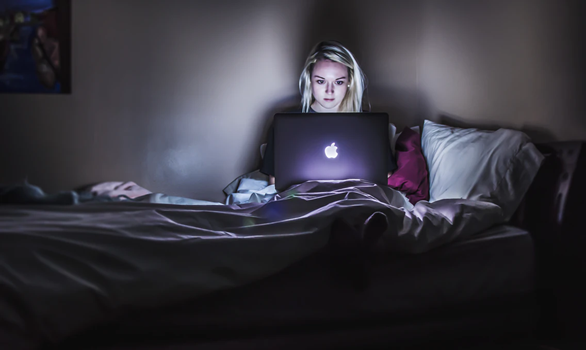 People who feel the most alert and productive in the evening are at greater risk of ADHD, obesity, and diabetes, some researchers say. [Credit: Victoria Heath on Unsplash ꟾ Unsplash Free License]

Imagine your alarm clock just went off. You were barely tired when you went to bed, but now you can’t help but hit snooze to catch just a few more minutes of rest. When you finally make it out of bed, your eyelids feel like concrete, and your thoughts feel slow and muddy. But you know that if you can just make it through the morning, you’ll be fine.

This scenario might sound familiar to many “night owls,” or people who tend to feel their best in the afternoon or evening rather than the morning. This tendency of either “morningness” or “eveningness” is what scientists call a person’s chronotype. About half of Americans have a chronotype in between these two extremes  — according to a 2017 study recording sleep patterns of over 50,000 people in the United States — the other half are split almost evenly between strong morning or evening chronotypes.

Given how strenuous getting up in the morning can be for this quarter of people who are night owls, it might not be surprising that research has linked evening chronotype with mood disorders like depression. But new research suggests that chronotype could also influence outcomes beyond depression, including obesity, ADHD and diabetes.

Some researchers are already saying that addressing questions about chronotype’s broader influence on human health could lead to new and more effective treatments for night owls. These include medications for ADHD that are less likely to worsen daytime sleepiness in night owls. More speculative treatments include light therapy, in which exposing a person to light at certain times is used to “reset” the body’s sleeping and waking patterns.

Chronotype is considered to be biologically hardwired, not just a preference, says Dan Oren, a psychiatrist at Yale School of Medicine. People who have an evening chronotype, for instance, release melatonin, a hormone associated with sleep, at a later time of night than people with a morning chronotype. Nonetheless, researchers typically determine chronotype by asking people questions about when they would wake up and go to sleep if they were free to set their own schedules, says Oren.

This was the case for a preliminary study published last month led by Stephen Becker, a psychologist at the University of Cincinnati College of Medicine. Becker and his colleagues surveyed 80 adolescents with attention deficit hyperactivity disorder (ADHD) and found that participants with a later chronotype reported significantly higher levels of daytime sleepiness than those with an earlier chronotype, regardless of how long they had slept. While the study may hold important implications for the treatment of ADHD patients, Becker says the finding likely extends to the population more generally.

But Becker says that it’s also possible that this association is linked to how long a person sleeps rather than with chronotype. He says those with late chronotypes tend to get less sleep, and although his study controlled for sleep duration, not all studies of this effect have.

Future research in this area should follow a large population over an extended period of time and examine melatonin levels to provide a more accurate measure of chronotype, Becker says.

Your rhythm, your metabolism

Besides ADHD risk, an evening chronotype is associated with higher levels of type 2 diabetes, a condition where the body doesn’t produce enough insulin, as well as obesity.

The majority of people in the U.S. and U.K. are either overweight or obese, according to the Centers for Disease Control and Prevention (CDC) and the UK’s National Health Service. For the U.S., this figure is around 70%, while in the U.K., it is closer to 65%. Nearly one in 10 Americans has diabetes, while the same figure holds among people in the U.K. over age 40, according to the CDC and Diabetes UK, respectively.

The common thread could be melatonin release, says Xiao Tan, a researcher at Uppsala University in Sweden and the study’s first author. Melatonin is associated with both inducing sleep and the body’s process for regulating blood glucose, which people with diabetes do less efficiently than healthy people do.

However, when Tan also looked at whether a genetic mutation associated with delayed melatonin release combined with evening chronotype to influence the risk of type 2 diabetes, the effort came up empty. This indicates that chronotype might depend on more than just the timing of melatonin release, he says.

Later chronotype might also influence whether a person is overweight or obese. A study published this month in the Journal of Biological and Medical Rhythm Research found that among 1,197 participants in a long-term heart study, people with an evening sleep chronotype had about 1.7 times greater odds of being obese than people with a morning or neutral chronotype. The effects remained after adjusting for sleep duration, said Xunming Sun, a PhD candidate who studies epidemiology and aging at Tulane University. Sun did the work with her adviser Jeanette Gustat, an epidemiologist at Tulane.

The study also yielded some unexpected results when the researchers controlled for race: the association between chronotype and obesity only held up among white participants.

Sun and Gustat are unsure how to interpret these results. “It raises an important question,” says Gustat. Cultural and familial differences surrounding eating habits could play a role, Sun says. In the past, she says, evening chronotype has been associated with unhealthy eating habits.

It’s true that people with late chronotypes “have a tendency to have more emotional eating,” says Anne-Laure Borel, a doctor and researcher at the Hospital Center University of Grenoble. Borel is the author of a November 2019 review article on sleep habits and metabolic syndrome. She also says that those with evening chronotypes tend to be more sedentary.

But although behavioral factors could be important, these findings on diabetes and obesity point to the fact that scientists have yet to fully understand the complex genetic and behavioral factors that underlie our biological rhythms of sleep.

What can you do?

While the mechanisms behind these findings remain murky, the associations between chronotype and serious health outcomes are adding up. It might seem a bit hopeless — after all, you can’t change your underlying chronotype.

“With sleep duration, you can do something,” says Oren. Evening chronotype is “hard to fight against.”

But people do have control over the extent of their exposure to light in the morning, which signals to your body that it is time to wake up, he says. He suspects that light therapy in the morning could be an effective way to reduce the health risks of a late chronotype. Though this idea has not been widely studied, some preliminary research does support this approach. For instance, a small study of 23 participants found that the time participants released melatonin could be changed by exposing them to light in either the morning or evening.

Because of the relatively small amount of research into this therapy, a medical intervention of this type is likely far off, says Oren. But he is hopeful such an intervention could be effective in altering the body’s circadian rhythm, or its waking and sleeping patterns, and even potentially improve health outcomes. Because sleep is so important to the body, he says, it makes sense that studies are finding these negative health associations. But it also makes sense that changing the body’s rhythm could help.

“It’s not surprising,” Oren says. “Virtually every biological function in the body is connected to our circadian rhythm.”