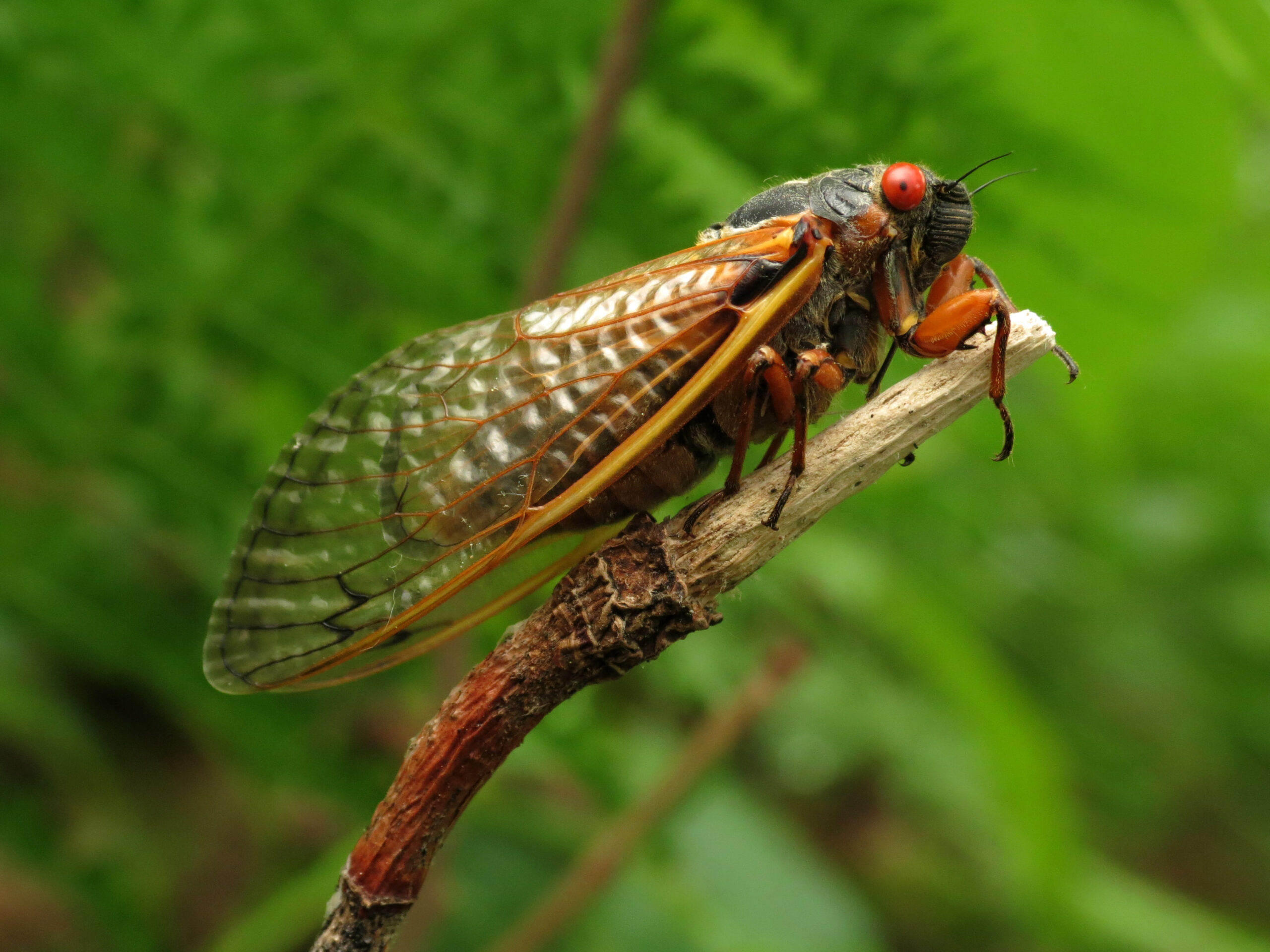 I’ve been looking forward to May of 2021 for what feels like an eternity, and not only because it means I’ll be fully vaccinated against COVID-19. My anticipation dates back to 2004, the last time the Brood X (ten) periodical cicadas emerged.

Nowhere else experiences periodical cicada emergences on the scale of the Eastern U.S. Hundreds of billions (trillions according to some) of loud, clumsy bugs (and they are, entomologically, true bugs) rise from underground every 13 or 17 years, depending on the brood. When the soil reaches 64 degrees Fahrenheit 8 inches down, the cicadas burrow upwards to scream, mate and die.

At 9 years old in Baltimore County, Md., I hadn’t seen an abundance like the cicadas before. I hadn’t imagined that there could be so many of any living thing. Plague-like abundance to some, but to me a bounty of nature. An Attenborough-worthy migration from soil to surface in my backyard.

Even as the cicada emergence was happening, I knew it wouldn’t last forever. I turned the year of the next emergence over and over in my head: 2021. The next time I’d see these bugs in this place, I’d be an adult.

I wondered if, by then, I’d have morphed into my understanding of what an adult was supposed to be: closed-off, uninterested, more concerned with the inconvenience of a few splats on my windshield than the wonder of biblical proportions happening around me. I feared that when the cicadas came around again, I wouldn’t care. I clung to 2021 as a litmus test for success in my fourth grade mind. If I could still get excited about cicadas at 26, I’d be OK.

17 years later, I am still excited. But my wonder in nature has been tempered by an ever-present anxiety that we humans are catapulting the global ecosystem towards irreversible ruin. I worry that something will be different this time, in a year when everything is already different. Last time, the cicadas were unavoidable. What if this time, I can’t find them?

Although we see each brood of periodical cicadas less than once a decade — and only for a few weeks at a time — they’re a constant part of their environment, interwoven with the fabric of eastern broadleaf forests. Underground, cicadas are actively feeding and growing, “not hibernating,” says Gene Kritsky, an entomologist at Mount St. Joseph University in Cincinnati, Ohio.

Burrowed in the earth, cicada nymphs latch on to tree roots and fatten up on a diet of sap. Periodical cicadas are often compared to clocks, but they don’t count seconds, hours or years. They track time through the flow of sap in their host tree’s roots. When a tree leafs out and energy stored below flows upwards to buds and emerging leaves in spring, a periodical cicada nymph knows, and keeps tally.

Cicadas are “insects of the climate,” says Kritsky, who literally wrote the book on Brood X. Erratic weather and climate shifts can fragment cicada broods, leaving populations small and vulnerable. If warm winter weather or a late frost causes trees to leaf out twice in one year, cicadas may double-count and emerge a year early. If a delayed fall causes trees to leaf out longer, cicadas suck up extra food. And if a 17-year cicada gets enough extra food in those crucial, early years of its subsurface time, it may grow fast enough to shift into a 13-year cycle. Fragmented broods might grow into successful new broods (a concept called brood escape), but, more likely, the splinter group will all be eaten before they can lay the next generation.

Before Brood X, a spider in my childhood bedroom instantly brought on tears of terror. At some point early in the 2004 cicada emergence, though, my fear of creepy-crawlies evaporated. It was exposure therapy en masse. I let them land on my legs and forearms and get tangled in my hair. I managed a playground cicada racetrack. I was even convinced to eat one (fried). I came to love the sound. A wash of white noise, like being on the smallest island surrounded by crashing waves on all sides.

But cicadas, in all of their abundance, aren’t a local guarantee. In northwest Ohio, Kritsky says more than half of counties are experiencing cicada declines. In some areas they’ve disappeared entirely. He attributes most of that loss to agriculture expansion.

Cicadas need healthy trees. Fifty-two hectares — more than 97 football fields – of forest is the approximate minimum to support a multi-generational cicada population, according to John Cooley, an evolutionary biologist at University of Connecticut in Stamford and periodical cicada expert. If there aren’t enough trees, there aren’t enough cicadas. If there aren’t enough cicadas in any given local emergence, they’re devoured (by birds, coyotes, foxes, raccoons, opossums, EVERYTHING) before they can lay their eggs. Periodical cicadas’ long-term survival strategy is one of sheer numbers.

Cooley studies the shifting and overlapping borders of cicada broods. A self-proclaimed cicada groupie, he maps periodical cicadas across the Eastern U.S., driving to whatever place is set to have an emergence that year (and almost every year, a brood comes out somewhere). Accurate brood maps are complicated. Although Brood X ranges from Michigan to New Jersey to Georgia, cicadas don’t emerge over that entire area. There are pockets of density based on the suitability of habitat and history of human development and land use.

In 2021, I live in Brooklyn, New York. Brood X cicadas used to be here too. In 2004, people still reported Brood X cicada sightings in pockets nearby on Long Island, but Cooley expects that population to be all but extinct this year. Long Island, with its sandy soil, isn’t an ideal cicada habitat to begin with. And the growing number of roads, subdivisions and strip malls hasn’t helped.

Whole broods, not just local populations, have gone extinct before. Brood XI, says Kritsky, was a “massive” cicada emergence in New England, “and it’s gone now.” Last seen in 1954, their extinction is likely — at least in part — the result of clear cutting and human activity. Brood VII is probably next to go, Kritsky adds. Both he and Cooley have tracked the shrinking Brood VII population in upstate New York, and are patiently waiting to see how many 17-year survivors will emerge in 2035.

Matt Whiles, an ecologist at the University of Florida in Gainesville has done periodical cicada research in one area of the country where, again because of human interference, cicada range might actually be expanding. Fire suppression in tall-grass prairie has led to forest encroachment: trees taking over the grassland. When cicadas emerge in Eastern Kansas, they come out where the edge of the forest used to be and lay the next generation’s eggs up to the border of where the forest grows now — marching westward into the remains of a dying ecosystem.

With each emergence, cicadas bring a mass migration of nutrients from below ground to above. Whiles has studied this shift as a “nutrient pulse.” He describes it as the Eastern U.S.’s answer to a salmon run: bringing nitrogen up from below and peppering fertilizer on the forest floor as the cicadas die.

Cicadas that go uneaten, having overwhelmed potential predators, end up fibers in a carpet of decomposing husks on the ground. The next year, says Whiles, more understory plants might grow than usual. Spring could be greener.

I’ve been dreaming about the cicadas. When I cup my hands over my ears, I hear them. When my mom inevitably calls to say strange holes are appearing on the trail in the park, or that her cat has brought a hunchbacked nymph into the house, I’ll plan my trip back to Maryland. I want to check all my 2004 haunts. The school playground, the forest patch near the house I no longer live in, the nature center parking lot bounded by oaks. I’ll spend as much time as I can soaking in the return, welcoming the children of my old friends.

Brood X’s borders may shift and, in 17 or 170 years, who knows. But for this year, “we know the cicadas are coming,” Kritsky says. “And, at this time where there’s so much uncertainty in the world, I find that rather comforting.”