When you grab an egg from the refrigerator for your morning omelet, you’re probably not thinking about advanced geometry — unless you’re a mathematician.

Three European researchers have identified what they call a “universal formula for egg shape” in a paper called “Egg and Math” published in the Annals of the New York Academy of Sciences in August 2021.

Their egg-citing goal? Nothing less than to “help us to understand a mathematical harmony of the universe,” in the words of co-author Valeriy Narushin of the Research Institute for Environment Treatment in Ukraine.

Identifying a universal formula has taken quite some time, as egg shapes are more complicated than they appear. In fact, bird eggs come in four main shapes, three of which are easy to describe mathematically: Circles, ellipses and ovals. But the fourth one — pyriform, meaning “pear-shaped” — has bedeviled mathematicians for years.

Pyriform eggs are unusual; they’re much thicker on one side, and pointier than the oval-shaped chicken eggs you’re familiar with. Narushin estimates that only around 3% of bird eggs are pyriform. 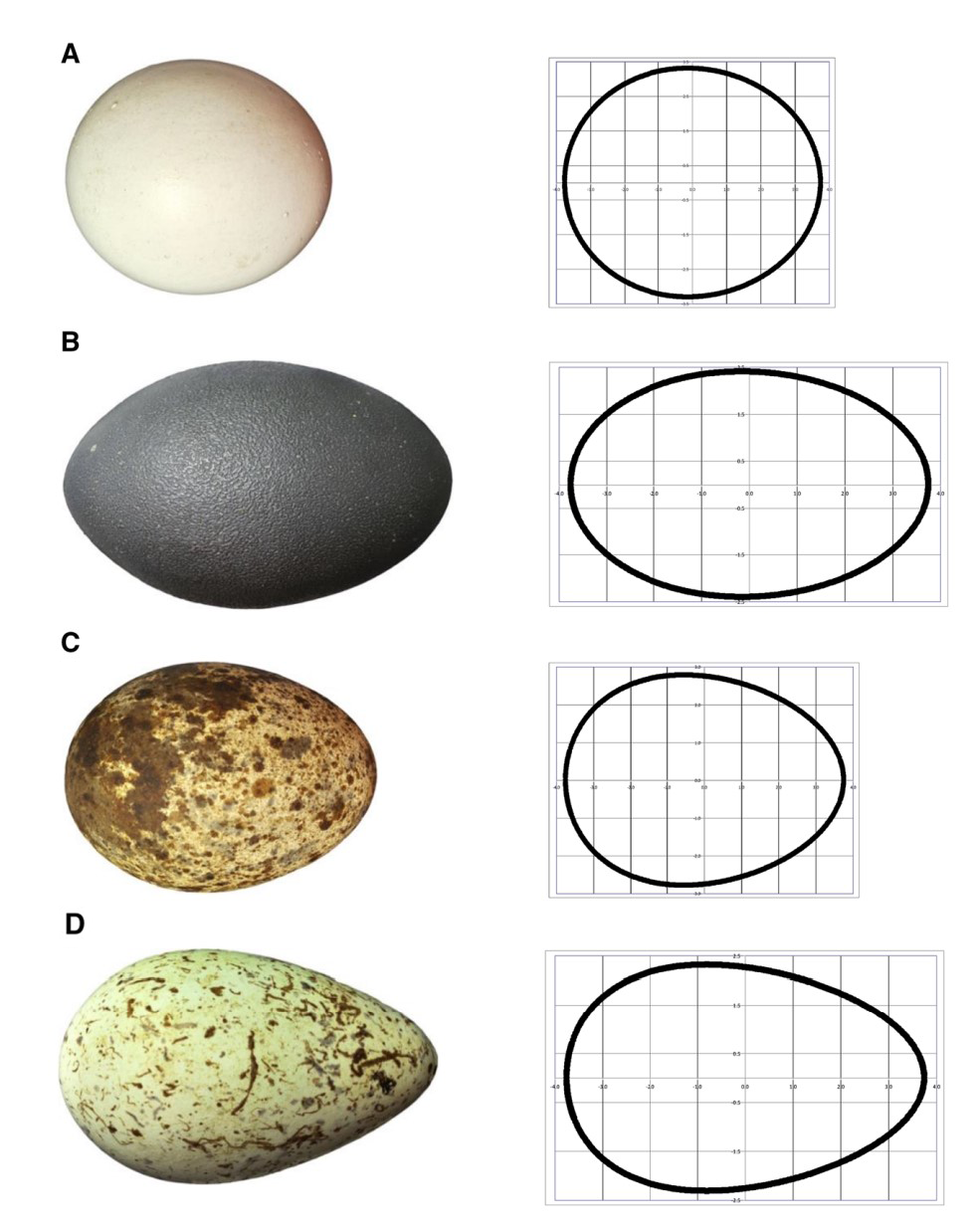 This research touches on a more fundamental debate in biology: Why do egg shapes vary so much, anyway? The new “Egg and Math” paper offers potential reasons, ranging from the way heat is distributed in each shape to the optimal configuration of eggs in a nest. Co-author Darren Griffin of the University of Kent in England suggests that it comes down to the fact that the eggs have “got to get out of a chicken’s ass.” (Immediately after he said this, our call dropped; we suspect he was being censored for fowl language.)

Other researchers think that egg shape has more to do with the adult bird than with the egg itself. A comprehensive 2017 study found that the shape of a bird’s egg correlates most strongly with that bird’s flight ability. “To maintain sleek and streamlined bodies for flight, birds appear to lay eggs that are more asymmetric or elliptical,” said Princeton ecologist and co-author Mary C. Stoddard in a press release. Flightless birds, on the other hand, have bodies which produce rounder eggs. But those claims have been challenged, most notably in a study from 2018 that ties egg shape to the posture of the incubating mother instead.

While we don’t yet have a definitive explanation for why bird eggs come in so many shapes, we now have a single formula to describe all these shapes:

This “Egg and Math” formula is intimidatingly long. It requires you to measure four different aspects of any given egg — its length, width and two other metrics related to where the egg bulges out the most — before the equation can model that egg’s shape.

So, just how useful is this newly-hatched discovery?

“For applied research, like for poultry science, it is absolutely useless to have such a universal formula,” admits Narushin. For most purposes, being able to roughly approximate the shape of an egg is good enough.

Ee Hou Yong agrees. He’s a mathematician and physicist at Singapore’s Nanyang Technological University and co-author of the 2017 study tying egg shape to flight ability. For that study, Yong and his colleagues used a much simpler formula that modeled egg shapes with around 97% accuracy — a number that would have been even higher if not for those pesky pyriforms.

“Sure, with a more complicated formula, you can describe things even better,” Yong said. But his team preferred to use a formula that the average reader could understand. “To us, the best formula is basically a compromise between fit and simplicity.”

Even so, Griffin remains optimistic that the universal formula will someday find a genuine purpose. Maybe the poultry industry can use it to find a more efficient way to store eggs. Or, Griffin suggests, perhaps the equation can help conservationists better appreciate different kinds of bird eggs and their varied needs.

“The short answer is: If I had a time machine or a crystal ball or something, I would be able to give you a far better answer,” Griffin said. “But the ideas that we’re pursuing right now are food production and conservation. We’ll see where it goes.”

The egg has been cracked. Now we just need to decide what to make with it.

What an interesting read. I wonder can it relate to shapes in space? Since planets don’t have a perfect circle shape either.