Or what's the matter with π 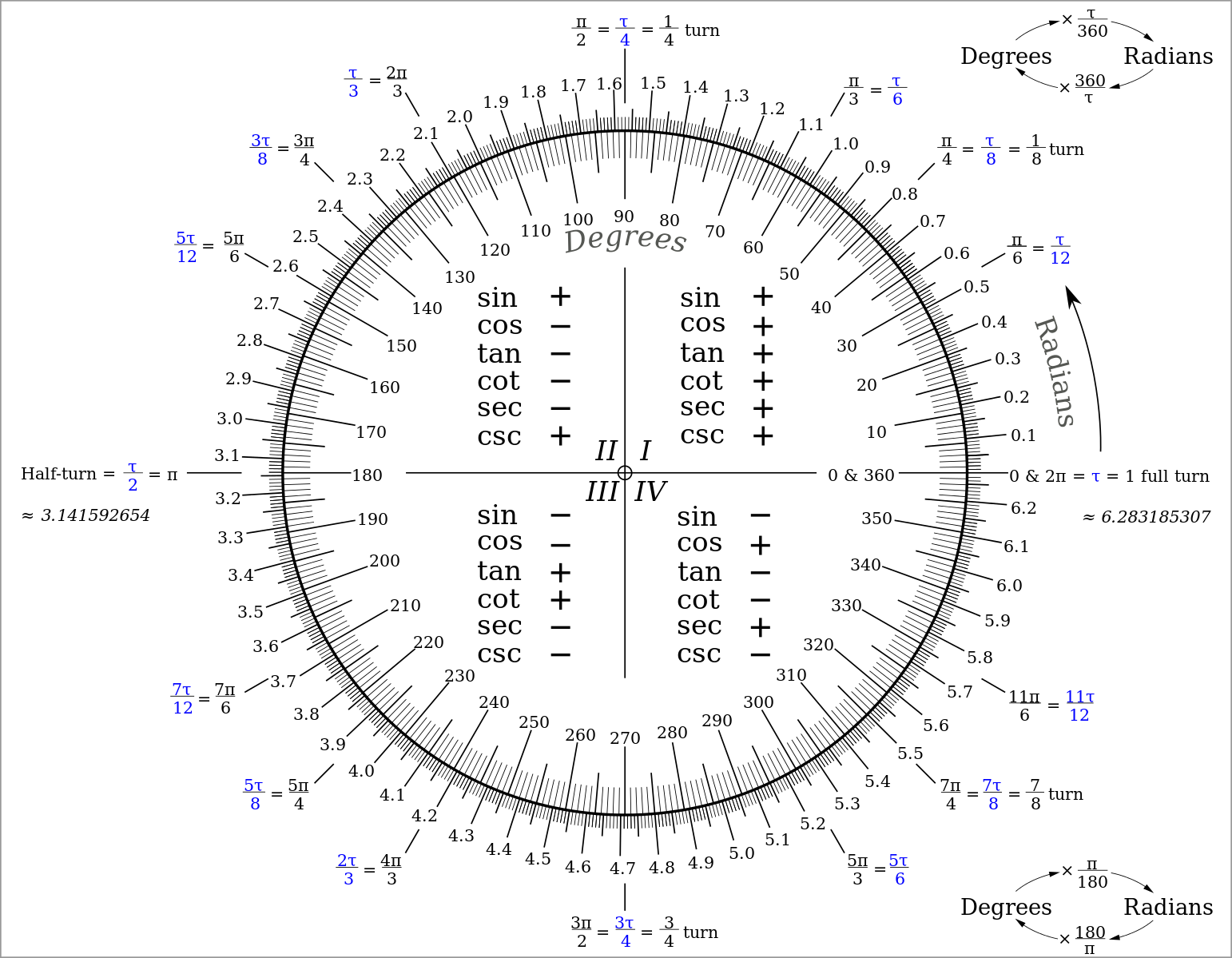 In the spring of 2015, professor Phil A. Smith tried something new in his trigonometry class. At American River College in Sacramento, Smith introduced his class to the radian, a unit of rotation or the size of an angle, but that’s not what was unusual.

Say you stake a pole in the ground and tie a string to it. Pace out the full length. Walk around the pole with the cord taut, and you’ve just traced a circle. The length of your string is the radius of the circle; the distance you walked is the circumference.

The ratio between these two measures, one straight, one curved, is an important one in mathematics. The Greek letter pi (π), representing a value of approximately 3.14, traditionally relates the two. And radian measurement takes advantage of that relationship. A right angle can be expressed as π/2 radians, and the part of a circle it cuts out is π/2 times the length of the radius of that circle. This is true no matter the size of the circle.

π appears in many important equations, ranging from basic geometry, to those describing the movement of waves, to the most elegant theoretical mathematics. But in those first lessons, Smith deliberately avoided π, because π is wrong.

Smith is among a small movement of mathematicians and enthusiasts promoting an alternative to π called tau (τ). I cannot rightly say whether τ is a good idea or not. But the mere suggestion that the most famous of the mathematical constants might be ill-conceived is provocative and strangely delightful. And who are the people willing to voice dissent against π, a bright light in the mathematical firmament?

Tau is equal to 2π. A right angle is τ/4 radians, and the corresponding arc length is τ/4 times the radius. It’s a simple conversion. Take any fraction of a complete rotation, and you have that fraction of τ radians. π radians only gets you halfway round a circle, but τ takes a full turn. A revolution.

The use of π is well established, its popularity likely tracing back to the 1700s, when prominent mathematician Leonhard Euler adopted the notation. But Euler himself used the symbol π to represent two different values; one equal to our modern π, and one twice as much.

The idea resurfaced in 2001, when Bob Palais, now a professor of mathematics at the University of Utah, published an article provocatively entitled π is Wrong! Palais presented examples of numerous equations containing π that could be simplified — beautified — with a “new π”, equal to 2π. Everything was rooted in the belief that the mathematics of π could be made more intuitive and easier to learn if they were clearly based on fractions of a complete turn, instead of half of one, π.

Palais’s argument inspired Michael Hartl, an entrepreneur and former CalTech physics professor, when he picked up the τ-torch in 2010, publishing a “Tau Manifesto.” Hartl recognizes and embraces the grandiosity of his word choice. “A manifesto strikes a polemical tone by design,” says Hartl, “Pi is so deeply entrenched that I felt like its opposition needed to strike a defiant tone.”

The manifesto first proposed the τ-notation, declared each June 28th to be Tau Day (6.28 is a decimal approximation of τ) and laid the groundwork for what Hartl calls “Tauism.” But he now takes what might be called a hands-off approach to promoting τ. “I was the match that lit this movement, and now I’m letting it spread on its own,” says Hartl, “And it is. It is spreading on its own.”

One of those flames is Vi Hart, who makes videos rooted in mathematics, and has been an outspoken proponent of τ. Her video Pi is (still) Wrong has been viewed over 2 million times on YouTube. But in this year’s Pi Day “rant” video, Hart acknowledges the “manufactured outrage” of her τ messaging. Bravado takes energy. It must be exhausting waging war against hundreds of years of precedent, and although the enthusiasm of the spokesperson may not wane, the facade of their rhetoric seems to deteriorate.

While it’s not replacing π anytime soon, Google and the Khan Academy have recognized τ as a useful alternative to π, making their online calculators compatible with the new constant. “I never thought it would be taken to this extent,” says Palais, crediting the efforts of other popularizers. “My father [mathematician Richard Palais] says, ‘You weren’t serious were you?’ I won’t commit whether I was or not.”

Yes, although τ is twice π, even the most ardent of τ-supporters have a tendency to seem only half-serious.

If π is wrong, it’s only by a factor of 2. You can beautify whichever equations you want, but the calculations using those equations won’t be substantively different. Maybe this makes a shift to τ as the convention in schools and academia seem possible. But because it’s just a substitution, it’s also difficult to get too worked up over the purported wrongness of π.

“It’s not a big difference, just a factor of two,” writes George Hart, a mathematician and sculptor (and father of Vi Hart). “Anyone who understands the mathematics can deal with either.”

“I love pi. Pi is an amazing number,” says David Richeson, a mathematics professor at Dickinson College and the editor of Math Horizons who has written a history of π. Richeson says that τ “seems like the right constant to use” but adds, “I don’t feel passionately enough about this to go to bat for tau. I’m happy to continue using pi in my teaching and scholarly life.”

In the naysayers, Palais senses a “survivorship bias.” If they endured the hardships of π and still flourished in mathematics, surely the next generation can do the same? As with many advocates, he remains resolutely focused on the possible benefits of teaching τ rather than the aesthetics of equations. But it’s not just the future mathematicians and physicists of the world that concern Palais. “We lose a lot of potential by making one of the most natural things in the world completely unnatural,” he says.

“This might seem like a small thing to experienced mathematicians, but for students trying to understand the concept of radians the first time, it’s another hoop that they have to jump through before getting to understanding,” Phil A. Smith writes in an email.

The educational upside of τ has yet to be measured. Smith continues to use τ in his classes, and reports subtle anecdotal benefits to teaching radian measurement, but writes, “I don’t want to overstate the effect of using tau rather than pi.” He still teaches his students how to use π, but only after concepts have already been introduced with τ.

In writing this, I hesitated at every bit of mathematical terminology, like the radian. I worried about both my own understanding, and that of the general reader. And although τ advocacy strikes me as an unusual effort against mathematical inertia, if the educational benefits are real, then perhaps it’s a battle worth fighting. “One of the reasons that using radians is considered too technical for a popular science article is that we use pi,” says Hartl, “If we used tau, it would be intuitive.”

Multiplying and dividing by two should not be two hard for our students, either. Or is it tau hard to fathom that change for the sake of change is not needed?

New Geometry of Circles,
which has a unique pi ,
to each Deameter.

The new geometry, has a new Formula

According to the conventional mathematics,
pi of each D = 3,1416
Therefore , it is very important number.

According to the new geometry of circles,
There are two important numbers.
Pi min = 3,1416
Pi max = 3,164
Both numbers are important, and the relationship
Between them (1,007) , is very important.

haha, ok. I already have issues with memorizing the unit circle chart these days. And I am now looking at chart + table + video like the below.

do we really need to make it even more complicated and try to be ‘smarter’? Or should introduce things that are useful?

The mathematics of squares is very simple

The mathematics of circles is not simple