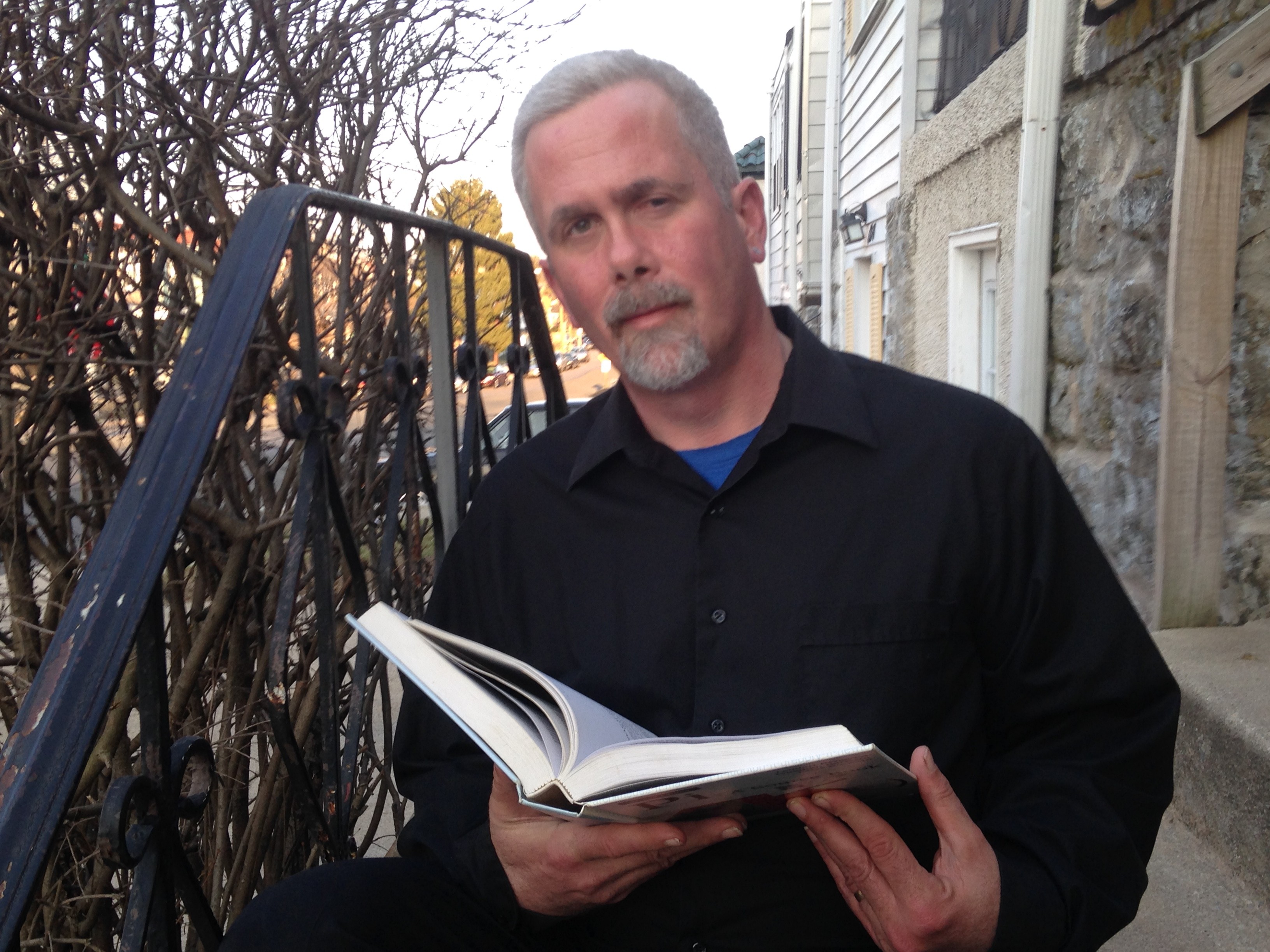 Mark Umile holds the American record for reciting digits of pi from memory. Today he splits his time between his day job and lecturing about his relationship with pi at schools and colleges in New Jersey.

Q. What’s your background? What do you do for a living?

A. I work as a security guard and occasional tour guide for the Battleship New Jersey in Camden, New Jersey. I’m also a package sorter at UPS. I’m 49 years old, I’ll be 50 in April and I was born and raised in Philadelphia. I live just outside Philadelphia in the Delaware County suburbs.

Q. How did you get started with pi?

A. It really began in 1994 or 1995. I was always good at memorizing data. I picked up a book in a local bookstore called The Joy of Mathematics, which had an array of snippets of math puzzles and math tricks. One of them focused on pi, and had a graphic illustration of 160 digits or so. I was intrigued. So I memorized those 160 digits and the insatiable appetite to get more and more digits under my belt grew and grew. 100 turned into 500, 500 turned into 1000, and in 2004 I found out there was a pi world ranking list online. At the time, the world record was 42195 digits set by a Japanese gentleman. So I decided to try to be the North American record holder. In December 2006, I memorized 12887 digits. Then in July 2007, I memorized 15314 digits. Up until quite a few months ago I was thinking of going for a third record. Unofficially I’ve memorized 3000 more digits but it was never checked officially.

A. It took three hours and 40 minutes to recite the digits in a law office on South Broad Street in Philadelphia on Dec. 16, 2006. But the second record was more exciting. I had three witnesses including the previous record holder, David Fiori, and a New Jersey actuary. Interestingly enough, you’ll notice that 15314 are the first numbers of pi, slightly rearranged, 31415. And it gets even better — we started the record on the morning on the 21st of July, 7/21. That’s the day before pi approximation day, since pi can be approximated as 22 divided by 7. We got going at 9:15 and when we stopped and I couldn’t remember any more digits, the clock said 12:29. That’s three hours and 14 minutes.

Q. What was your strategy to memorize all these digits?

A. Well, I have a keen memory. For example, just yesterday my wife and I ordered something online at Wal-Mart and there was a 13-digit order number. I told her to just tell it to me — and I still remember it now. It was 3281663008378. And when I gave the number to the clerk by heart, she said, “Hey, you have a good memory.” And I said “Yeah… I do that quite a lot.”

Now, my strategy for pi. I’ve always been a lover of classical music, and in 1985 I was an usher at the Academy of Music in Philadelphia. Music comes in beats and rhythm patterns, and I figured why not just apply the recitation of digits of pi to the beat of music. So I separated each of the digits into beats of 2, 4, 6 or 10 digits, like a measure, then each 1,000-block grid of digits acted like a movement in a symphony. I put emphasis on my voice up and down in a sort of sing-song rhythm, you know, three point ONE-four ONE-five NINE-two SIX-five… then in beats of four, then started with measures of six beats. and when the 1,000-digit block is over, I start the whole sequence over for the next thousand. I do that until we get to 10,000, then I start saying the numbers in 10 digit blocks. 5667227966… up until I can’t go anymore. While I was memorizing it, I took a cassette recorder and tape recorded my voice with that same dictation and would listen to it again and again and again, until it was burned permanently into my memory.

Q. Wow! So you must have a pretty intimate relationship with pi.

A. Yeah. I’ve found some interesting patterns in the digit strings — cryptic stuff, a lot of coincidences. I’ve actually compiled a lot of this in a paper that I haven’t published with all kinds of different things like that in the digit strings. I’ve even found numbers linking symbolically to the Mayan calendar. You know, all of the first 144 digits add up to 666? And in the 315th decimal place, the numbers are 315. The 360th decimal place numbers are 360, and the 384th decimal place has a 3 and 8 and a 4.

Q. And do you believe in all that?

A. You know, pi is a number I’ve had a love connection with, and trying to know its symbolism, but also knowing that it’s a practical number that everyone uses mathematically. I have a much different relationship with the number than most other people do, but I know what it stands for and how it’s used.

Q. What else do you use that memory for?

A. While I’m probably retiring myself from memorizing big numbers, I can do a lot of other memory tricks. I can calculate calendars, do some things with the zodiac, and even determine the phase of the moon over the past 400 years.

Q. I was! How did you calculate that?

A. How I know that is the moon sign each and every month from the full moon to the next full moon takes 29.5 days. And I’ve memorized that Jan. 19 1992 was the first full moon of the year. From there, I just have to count by 29.5. I can do it all the way back to 1600 and 5 or six years into the future. Oh, and you were born on a Monday. And interestingly enough, that’s my brother’s birthday. I use the same method, just using raps, abbreviations and beats in my head. And just using numbers, I know that your moon sign is Leo.

Q. You said you were retiring yourself. Are you afraid of losing your record?

A. Right now, if someone wants to step up to the plate and surpass the record, I would love that. I want to inspire others to be the best. If someone surpasses you, you didn’t lose. They looked to you as a role model. You’re both winners. As far as the future, if someone passes my record, I’d like to be the first one to shake his hand.

Q. Awesome, anything else?

A. Well, I’ve written a rap that should say it all.

A chosen few of us have done our part

To memorize the digits, as many by heart

So many digits are beyond that three-point-one-four.

We all declare there’s nothing to it,

Although many do ask why would we do it.

If for no better reason, whether a challenge or a dare,

We memorize pi because it’s there

As the climber scales the heights to seek

So we memorize pi hoping well to gain

The limitless potential of our brain.

We respect all opinions but reserve our right

To exercise our minds to this admirable height.

Practice makes perfect, that’s all it would take,

It’s easy as pi, if not a piece of cake.

Interesting to say the least! It’s like unlocking mysteries. Who knows how far this can go. Maybe, just maybe eventually you’ll find a way to UN-encrypt…maybe.

“As far as the future, if someone passes my record, I’d like to be the first one to shake his hand.”

Now, it’s anyone’s guess whether Marc (the spelling given on the PWRL site) actually assumes the next record-holder will be a guy, or if it’s just a grammatical matter (aversion to singular “they”). In either case, I think it’s a girl’s turn to make national record! At the rate I’m going, it’ll take me about 4 years (I’ve been at it for a little over a month, and have memorized 380 digits)…

Though, to be honest, I feel more daunted by the thought of *reciting* all those digits than memorizing them… sounds exhausting.