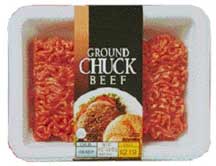 Once upon a time, we all thought Martha Stewart was the Queen of Things Domestic. But then the fairy tale ended: We realized that she, too, makes (more than) her share of stupid mistakes. Her comments on the Today show this morning were no exception.

Tara from Scienceblogs’ Aetiology, who stayed home from work today to look after her son, came across Martha grilling hamburgers (for breakfast?) on the show. Martha apparently threw a burger on the grill and the anchor asked her how long she was going to cook it. Martha’s response?

“For a rare burger, about 3 minutes on a side.”

A rare burger? This does not make Tara happy. She writes:

Ground beef. Martha Stewart, cooking icon, telling viewers that they can cook it rare. No mention of using a food thermometer to be sure that the internal temperature is up to 160 degrees F in order to kill any contaminating bacteria. No mention that eating such a burger rare increases one’s risk of developing a food-borne illness. Nothing.

This is why public health officials bang their heads against the wall. Who has more influence–your local public health department, already understaffed and underfunded, trying to get the word out about safely BBQ’ing this summer, or Martha Stewart with 5 minutes on the Today show, telling everyone how to cook a rare hamburger?

Granted, we’re all willing to take our chances now and then with a rare burger. Some risk-takers (you know who you are!) even prefer them that way. And that’s fine: but to go on network television as a trusted source (alright — we might know better than to trust her, but we are among the minority of Americans who actually, like, read and stuff) and make a mistake that could make millions sick?

Indeed, Martha obviously hasn’t been keeping up with food safety news ― for nearly 10 years. The USDA, in guidelines published in 1997, advises cooks to “use a meat thermometer when cooking hamburger — and not rely on the internal color of the meat — to be sure that it is safe to eat.” An FDA site concurs, “If a thermometer is not available, do not eat ground beef that is still pink inside.”

Bah, most people’s hands are probably dirtier than the meat. And then they go touch their eyes… not that I would ever do such a thing. Except most days on the subway. Haven’t been sick in a long time.

And wouldn’t any time estimate vary greatly based on the size of the burger? A fat hand-packed one needs way more time than those skinny auto-pressed ones often found ready-made. I’d bet some of those skinny ones would be fine at 3 min a side on a hot grill.

Yeah, I like my meat so rare it’s mooing, no matter what you fear-mongerers say!

Of course size matters! …that’s why thermometers are essential. :)

And I do refer specifically to hamburgers here — because the beef is ground, burgers are more likely to have bacteria throughout them rather than just on the outside.

Don’t forget that there are other risks inherent to eating beef, especially in the ground state: mad cow disease, cancer due to carcinogens formed during the grilling process and all that fat which is another story altogether. These risks don’t go decrease the more they are cooked.