The next time you’re zoning out in the coffee queue, consider being good to your body: how about a nice cup of tea? 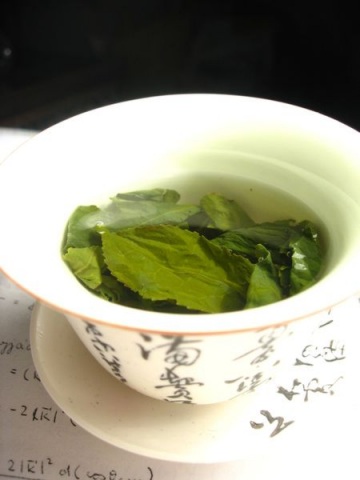 Green tea: So much more than what coffee can offer. CREDIT: WIKIMOL

Like most sleep-deprived, frequently hungover NYU students, I spend what feels like hours each day waiting in line for my daily dose of caffeine. To keep myself from nodding off, I often reflect upon the drinks that the people in front of me order, enjoying the sneak peek I’m having into their private lives. A Venti Hot Chocolate with Whipped Cream? I bet she wears “Hello Kitty” t-shirts and squeals whenever she sees a puppy.

One thing I’ve learned from doing this (aside from the fact that people really don’t like being stared at) is that it’s a rare day when someone orders a tea. Now, I’m not talking about a Nonfat Chai Latte or a Green Tea Frappuccino: I’m talking about a good old, plain cup of tea.

In an over-stimulating consumer culture that revolves around the concept of “the individual,” I realize that the idea of plain tea is not all that appealing when other possibilities include Grande White Chocolate Peppermint Mochas with One and a Half Pumps of Syrup.

But in my opinion, there are some pretty clear reasons to opt for the tea. Aside from being delicious, a cup of tea is a lot easier on the wallet and the waistline than a mocha, and ordering a tea saves you from having to shuffle over to the other side of the counter and wait another five minutes while giving the barista your cruelest “where’s-my-frigging-coffee-I’m-late-for-class” look.

But even more importantly, tea is actually quite good for you.

For one thing, tea contains strong antioxidants. Antioxidants act like mops in our bodies, soaking up toxins called free radicals that can, if left to their own devices, cause cellular and genetic damage.

Green and black teas contain particular types of antioxidants called polyphenols, which are so amazing they really should be crowned the Jack Bauer of plant compounds. Scientific studies suggest that polyphenols can lower the levels of “bad” (LDL) cholesterol in your blood, reduce your risk for a heart attack and promote weight loss by suppressing your appetite and increasing your metabolism. (While caffeine is also associated with weight loss, the effects observed from tea go far beyond what is expected from the caffeine alone.)

A polyphenol called EGCg, found in abundance in green tea and half as much so in black tea (but not, however, in coffee), has also been shown to exhibit protective effects against breast, prostate, lung, pancreatic, colon and stomach cancers in animal models. Originally it was thought that the antioxidative activity of EGCg was responsible for this, but research has since suggested that EGCg prohibits cancer development and tumor growth using a number of more specific, but as yet unconfirmed, mechanisms. Some of its effects are only sustained if you drink seven or eight cups of green tea per day though – so drink up.

Green tea has also been associated with increased calmness and concentration, the effect of a particular component called theanine which facilitates the generation of alpha waves in the brain. Alpha waves help reduce stress and anxiety, all the while increasing focus and concentration. Highly creative people produce a lot of alpha waves when faced with a problem they need to solve, for example.

Even better, there are no known disadvantages to drinking lots of tea – unless you are trying to have a baby or are already pregnant. EGCg inhibits folic acid, a vitamin necessary for embryo development. But that’s it.

I’m still feeling resistance, and I bet I know why: you’re afraid because tea doesn’t have as much caffeine as coffee, right? Yes, it’s true – black tea has about half the caffeine of coffee, and green tea is even a little weaker still, although it depends, of course, on how long the tea is steeped. But I have news for you: research suggests that there is no noticeable difference in how alert one feels after drinking a cup of tea versus a cup of coffee, even though they contain different amounts of caffeine. Although researchers cannot yet explain why this is the case, “caffeine level per se does not affect the short term response to tea or coffee,” the study says.

With all these benefits, it’s no wonder that world-wide tea consumption is estimated to be second only to water. Only America seems to be lagging behind, and maybe it is Starbucks’ fault for marketing the heck out of its coffee drinks (and do you blame them? Check out the profit margins on those things!). But the next time you’re zoning out in the coffee queue, wondering whether you actually have the $4 you need for that latte, consider being good to your body: how about a nice, hot cup of tea?

I think this article brings about a very important point. If tea was as “fun” and fattening to drink as many of the Coffee Houses have made coffee, more people would drink it. It’s funny, the people who represent the elderly that have achieved such long lifespans are the tea drinkers of the 30’s, 50’s and 60’s. The trick is to make it fashionable….add some tequilla or fruit or put it in a fancy cup and charge people a fortune to drink it and then they just may do something that is good for them.

Thanks for the article!

I started on tea a few weeks ago, and I guess now I will never go back! In fact, maybe I will have some tea right now before move on to my other daily brews…

They’re working on it:

Jamba Juice also offers a subsitute to coffee, for a caffeine fix, called Matcha Green Tea, which can be taken in a smoothie or as a small 4 ounce shot with soy milk, orange juice, or a mixture of the two, called a “dream shot”. —wikipedia

I’m not yet ready to give up the 4 shots of espresso the barista sneaks into my americano, but a cup of tea can be nice, especially in the winter.

Nice job with the magazine. You’ve set a mark that my classmates and I will aspire to equal.

I liked your lead here. I almost didn’t notice when your chatty hook segued into a scientific explanation – good job. :) I look forward to writing for Scienceline this fall.

I gave up coffee about two years ago when my sister turned me onto tea. She lives in Boston and they have a loose tea store. I went into it and I was overwhelmed by the amount of so many different kinds. They cure everything!! I have a tea I drink before I go to sleep, I have a tea for a stomach ache, and tea for just good old caffiene. Tea does not affect me like coffee does. DRINK TEA!

I am posting this for the individual who is hoping for, or searching for some positive feedback about green tea. For one, I find that it does make a tremendous difference in the rate of weight loss. It also alleviates bad breath, improves overall dental health, and it clears the skin. I sometimes use it as a rinse, after a shampoo to stimulate my scalp–which feels very invigorating. I do feel less stressed when drinking green tea, regularly. As for the cost, I keep it minimal. I just drop a few bags of it into my bottled water, and sip it throughout the day. I would say I get about 5-7 cups of it, daily. I let the water get really green, and bitter. It’s a taste that I enjoy, but it might not be everyone’s ‘cup of tea.’ (smile)

Just to add on. The antioxidants found in green tea can be extremely beneficial to a person’s health. There are claims that green tea can even protect the cells from the oxidation process which causes free radicals in our bodies.

One recent study at Pace University tested the idea that green tea is great for getting rid of bad breath. What they did was mix green tea with certain bacteria that invade the mouth and cause tooth decay and even strep throat. The findings were very interesting, as the green tea actually inhibited the growth of the bacteria, therefore successfully fought against it.

I also liked JC Mitchell’s comment about how he puts a few bags of green tea into his (or hers) bottled water. Might give it ago myself ;)

I’m ready to give up my coffee now. Great Article!

Tea is also very good in fighting bad breath (with no sugar in it)! ;)

Man I used to HATE green tea, started drinking it for help with weight loss but after a while really grew to like it.

So if you dont like the taste try and force yourself to drink it, it gets better and is certainly better for you!