A new formula might help curb the spread of the deadly disease. 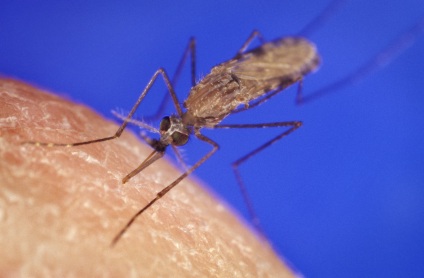 The blood-feeding Anopheles gambiae mosquito is one of the leading malaria vectors in the world. CREDIT: CDC/ JAMES D. GATHANY

Scientists have created a mathematical formula that could improve malaria treatment by accurately predicting which populations are most vulnerable to the disease, which kills 1.3 million people, mostly children, annually.

The formula could help to focus anti-malarial drugs and preventative treatments on those who need them most by identifying and targeting high-risk groups. This would eliminate the need for blanket treatment of large populations, a process that wastes scarce resources and runs the risk of increasing resistance to anti-malarial drugs.

“This is an important first step in how you would do wide-range malaria control,” said head researcher David Smith of the National Institutes of Health. “It would be used to make plans on a much coarser level to target high-risk areas and plan preventative interventions.”

The study, published in the November 24, 2005 edition of Nature, analyzed data that had been collected from other malaria studies involving over 90 African communities and approximately 5000 children. Using that data, the researchers developed a mathematical framework to express the relationship between two measures of infection: the proportion of people who are infected by malaria, and the rate at which people are bitten by infectious mosquitoes.

The spread of malaria is dependent on both the number of infected people and the number of infected mosquitoes that live in an area. If malaria is prevalent in much of a region’s population, more mosquitos become infectious by biting people with the disease. This in turn spreads malaria further throughout the human population, because more mosquitoes exist that can infect people.

“It’s a closed-loop relationship—one affects the other,” said Jonathan Dushoff of Princeton University and a co-author of the study. “We want to use this relationship and statistical methods to be able to make an inference to target populations.”

Those target populations are the people who are more likely to get bitten. For example, people living near larva breeding pools are at higher risk. In addition, some people’s body chemistry attracts mosquitoes because of the amount of carbon dioxide they give off.

“The people who are bitten more get malaria more and are the most important people in determining the spread of the disease,” said Smith. The new formula will help health-care workers focus prevention efforts on these extra-susceptible people – which could have an enormous effect on malaria control.

Steps to reduce a person’s likelihood of being bitten by infectious mosquitoes may be as simple as installing screens in windows of homes, using bug nets around beds while sleeping, and eliminating areas of stagnant water near where people live, said Dushoff.

Question instead of comment. What increases Carbon Dioxide in expiration?
I wear a hat, special anti-mosquito clothing, rubber band on my wrists, gloves,
knee sox, long pants and I can actually hear them. Bug repellents do not work, I’ve tried them all. I am their breakfast, lunch and dinner. I love to garden but it is becoming more and more uncomfortable.