Bloom from the Tomb

A corpse flower grows in Brooklyn. 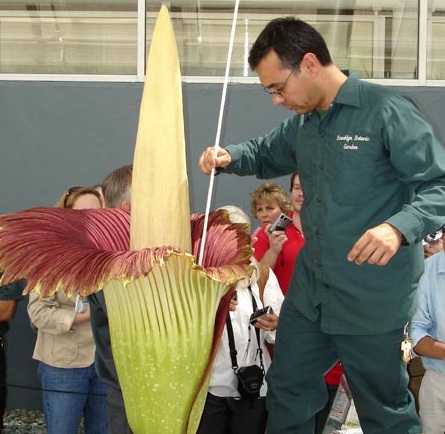 Early in the morning, before the corpse flower exhibit opens at the Brooklyn Botanic Gardens, people are already pressed up against the glass, shadowing their eyes to get a glimpse of the plant rumored to smell like rotting bodies. The phallic, tapered spike that forces its way to the ceiling has started to shrivel now that the flower passed its climax, but Alessandro Chiari, a plant propagator at the Gardens, still diligently waters his Baby.

The corpse flower—this particular one is affectionately named Baby—rarely flowers in cultivation, he tells me. When Chiari realized that the bud was a flower instead of the typical leaf, there was cause for celebration. A corpse flower hasn’t bloomed in New York City since 1939, and Baby is blooming for the first time since the Gardens acquired the plant in 1996. In preparation, they set up a blog, a webcam, and posters for the exhibit, clearing the Bonsai room for the special event.

In just two weeks, the Amorphophallus titanum plant grew 30 inches, making it over five feet tall. Baby then unfurled like an upside down umbrella, reaching 30 inches in circumference. A fetid aroma started to fill the air. The yellow phallic spike (called a spadix) emits the smell, which in the plant’s native Sumatra lures pollinators like carrion beetles and sweat bees looking for rotting flesh—the perfect place to lay their eggs.

It smelled like a combination of offensive odors, says Chiari, who has been caring for Baby along with his colleagues at the Gardens. “I didn’t try to identify the various components. I do that with wine, but not with this,” he says.

The spadix starts to stink when the female flowers are ripe for fertilization. The corpse flower is really an inflorescence, a bunch of flowers grouped together that resembles one flower, says Chiari. It’s difficult to explain this concept without the help of visual aids, so we sneak into the sanctuary before the exhibit opens up to the eagerly waiting crowd.

Inside the exhibit, Chiari delicately removes a small square of leaf he cut out of the plant days before, revealing the flowers inside. Small, blood red tentacles reach out from the thick stem—the female flowers. Just above them stands a ring of yellow male flowers that look like blisters of pollen poised to dust insects rooting around the plant searching for the source of that tantalizing smell. Although the female and male parts appear to almost touch each other, they remain too distant for the plant to self-pollinate. Insects must explore the depths of the flower in order to pollinate the plant—unless someone like Chiari can perform the magic.

The putrid odor that entices insects only lasts about eight hours and started around dusk the evening of August 10th. By the time visitors got to the exhibit the next morning, the stench was nearly gone. “There were very few people here when it was at its best—or worst,” says Chiari, who blogged about the event on the Gardens’ website.

The spadix itself transforms throughout the process, darkening from yellow to purple before starting to dry out. “It was almost like someone came in overnight and painted it purple,” says Chiari.

Most visitors didn’t get the opportunity to see how the plant progressed or what it looked like from an intimate perspective, so Chiari went into detail on the blog: “Up close to the plant, it’s a different world: a world where strange colors appear, disappear, and fade into each other; a world of fleshy, spongy, and velvety tissues you can only lightly caress for fear of damaging them.”

For horticulturists and guests alike, the three-day event was the first and possibly last time the spectacle will be seen in all its sensual glory. Enticing a captive corpse flower to bloom is extremely difficult, so getting Baby to repeat the performance may be impossible. “We might have done something right the first time that we won’t do again because we don’t know what it is,” says Chiari. His two hopes, now that the plant is nearly finished blooming, are that he will help propagate additional corpse flowers in the future and that the Gardens’ plant blooms again.

But until he knows if Baby will bloom again, he will tend to the other plants in his charge: “I’ve neglected them for the past couple weeks,” he admits.

Chiari says the time and effort expended to get the plant to bloom is worth it. When ranking this event with other highlights of his career, he smiles, gazes at the wilting plant and says, “It’s pretty high up there.”

Happy 67th birthday to the phallic corpse flower! Great description of an unusual and enticing plant . . .