Some scientists are rethinking the positive effects global warming may have on agriculture. 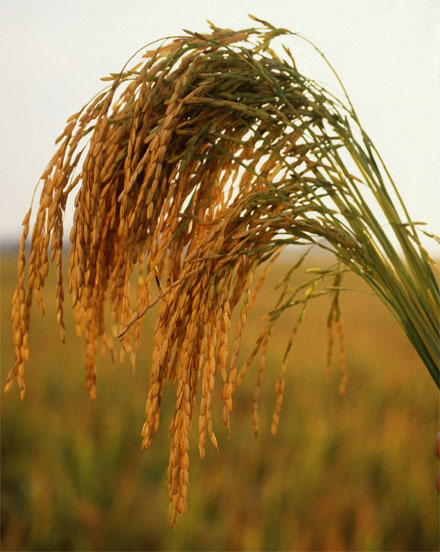 In the face of global warming, how will our crops fare? [US long grain rice. CREDIT: KEITH WELLER FOR THE U.S.D.A.]

Plant biologist Stephen Long, is worried about the future of agriculture in the U.S. “corn belt,” and the possibility that future harvests of corn, wheat, and other staple crops will be smaller than most climatologists’ current projections. “We don’t know what train crash is up ahead and how to prepare for it,” he said.

Long, a professor at the University of Illinois at Urbana-Champaign, believes that current crop models rely too heavily on the old idea that global warming will have a dramatic, positive effect on plant growth and that will result in bumper crops. This is particularly troubling news for developing nations, which are expected to rely increasingly on North American food exports as the climate warms.

Many climate modelers disagree with Long’s results and think that their projections are conservative enough to account for the lower crop estimates found by Long’s team. They acknowledge that food shortages are inevitable if the climate continues to warm, but believe that those shortages will come later than Long suggests.

“Models suggest…that climate change is not likely to seriously compromise the ability to meet demand [for food] – at least until 2050,” said Penn State geographer William Easterling. “For the latter half of the century, it is a different story…and food production will slip below demand.”

Easterling, along with hundreds of other scientists, examines the scientific evidence of climate change as part of the United Nations’ Intergovernmental Panel on Climate Change. The first portion of the 2007 IPCC report was issued on February 2, 2007; the impacts portion, which would look at global warming’s effect on agriculture, will not be released until April.

The physiology of plants drives the disagreement about future crop sizes. Plants use carbon dioxide, in combination with light and water, to create energy through photosynthesis. Theoretically, the higher carbon dioxide levels associated with global warming should boost plant growth in a process called “carbon fertilization.”

Studies conducted in greenhouses since the 1980s have suggested that carbon fertilization can increase crop yields by as much as thirty percent. However, scientists have suspected that the greenhouse results were skewed because even crops like corn and sorghum, thought to be less affected by extra carbon, showed increased growth under high carbon dioxide conditions.

Years of outdoor experiments by Long and colleagues have culminated in data that contrasts starkly with the findings from greenhouse studies. Using rings of Free Air Concentration Enrichment (FACE) towers that blow carbon dioxide onto the crops, researchers found that rice, wheat, and soy showed less than half the increased crop yields in comparable greenhouse studies. Long’s conclusion is that the crops in the greenhouse studies were benefiting from the artificially superior growing conditions where soil conditions, temperature, and moisture are all carefully controlled.

“When we elevate carbon dioxide, with conditions as natural as we can make them, the yield response is less,” said Long, who published his work in the journal Science last June.

Long is supported by experiments presented by German scientists this past November at the Agronomy Society of America annual meeting. In their study on winter barley, sugar beet, and winter wheat, the Germans’ results were “very much in line with what we saw,” according to Long. The yield increase due to carbon fertilization was also half of what had been found in prior greenhouse experiments.

One simple question, would it be possible to grow grain in a very hot country with little water, how much water does grain take to grow.