The international body on climate change predicts stronger hurricanes due to global warming. 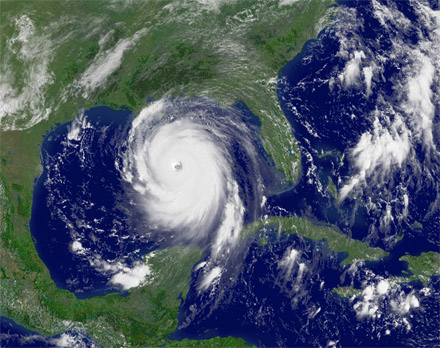 Stronger hurricanes in the North Atlantic—like those that battered the Gulf Coast in 2005—are generated by global warming, says a new assessment conducted by a United Nations-sponsored group of scientists.

In its last announcement in 2001, the Intergovernmental Panel on Climate Change (IPCC) said there was not enough evidence to conclude that humans contribute to hurricane activity. But the latest report, released in February, states with more certainty that the effects of global warming will likely cause future hurricanes to be more intense, with larger peak wind speeds and heavier precipitation.

The report also notes that stronger storms in the North Atlantic since 1970 correlate with “increases of tropical sea surface temperatures,” something that experts disagree on.

“Sea surface temperatures are warming, and this is a major factor in hurricane formation,” said Mark Chandler, a climate systems researcher at the Goddard Institute for Space Studies in New York City, and contributing author on previous IPCC assessments.

Chandler said the IPCC has come to an overwhelming consensus that human contribution to global warming has caused the tropics to heat up, producing warmer sea temperatures—a driving force behind hurricane activity. “We see [this as] the major ingredient going into the pot that forms hurricanes,” he said. “It’s fair to say hurricanes will increase in intensity.”

Although the IPCC links global warming to hurricane intensity, there is debate over whether or not a heating planet will affect hurricane frequency.

The report said hurricanes might become less frequent in the future, but they are not sure because according to their assessment, “there is no clear trend in the number of hurricanes” since 1970. But some experts think IPCC scientists should look farther past the ‘70s.

“What the IPCC left out is that they only looked at the data since 1970, but from the mid 1940s to 1960s we saw the same thing we’re seeing now,” said Christopher Landsea, science and operations officer at the National Hurricane Center in Miami. “Hurricanes look the same today as they did 50 years ago.”

The hurricane trend since 1970 is controversial because some experts say that hurricanes are not becoming more frequent, rather they are simply repeating a cycle. “Saying there are going to be fewer hurricanes, that looks reasonable,” Landsea says.

After working on earlier reports produced by the IPCC, Landsea withdrew from their recent publication and charged that the group has a highly politicized agenda and fails to base their report on sound scientific data. He also criticized the IPCC for failing to address the extent of human influence on global warming and how it affects hurricane activity.

“Yes, humans contribute, but [the IPCC] should say how much. What they said is misleading,” said Landsea, in reference to the IPCC attributing human contribution simply as “more likely than not.”

The IPCC said the “magnitude of anthropogenic contributions [is] not assessed” and that “attribution is based on expert judgment rather than formal attribution studies.”

Comprised of more than 600 scientists and leading climate experts from 113 nations, the IPCC reviews scientific literature from around the globe and studies climate change data. Established in 1988, the group regularly issues climate assessments for policymakers and scientists.

Climate Modeling that Works: Why it’s easier to predict the next 20 years of warming than this weekend’s weather.

The World’s Hottest Super-Models: How scientists are using supercomputers to model climate change.
—