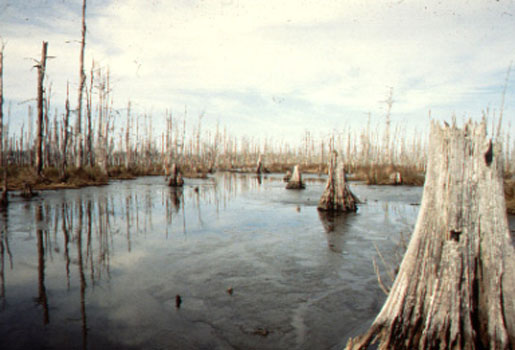 Expect coasts to get a whole lot saltier – and not just because of the sailors – as global warming disrupts storm patterns and pushes seawater further inland throughout the next century. The forecasted salt surge will threaten natural organisms and freshwater resources as it increases the salinity levels of coastal soil and water, according to an April report released by the Intergovernmental Panel on Climate Change.

“It was so easy to reach a consensus” for the impacts of climate change on the coasts, said Virginia Burkett, a scientist for the U.S. Geological Survey and lead author on the report by the United Nations panel. “How [salinization] plays out regionally and locally – that’s where our greatest challenge lies.”

Salinization on the coast, also called saline intrusion, is the increase of sodium ions in soil and water. This is an important process because salt level affects osmosis, the process by which some organisms, such as plants, take up or give away water. As the number of salt ions in the surrounding environment increase, water will naturally flow out of an organism toward the greater concentration of particles, causing dehydration and death.

“Salinization, once in [an area], is hard to reverse,” stated Sujay Kaushal, who co-authored a 2005 paper discussing increased salinization in U.S. freshwater.

Saline intrusion will occur as storm patterns vary due to climate change. “If you have erratic and high intensity storms at weird intervals, it leaves a salt pulse that has a big effect on little organisms,” Kaushal pointed out. A salt pulse is a sudden influx of ions into soil and water, dramatically changing the ionic concentration of an area, giving organisms little time to adapt to their salty surroundings.

Saline levels on the coast will also fluctuate in the next century because of human-induced sea level rise, brought about as the oceans expand due to warming waters. “When talking climate, you’re not just talking climate change, but climate variability,” said Sujay. “Organisms and ecosystem processes can’t adjust to huge [salt] fluctuations associated with climate variability.”

In an attempt to adapt to changing salt levels brought on by these circumstances, ecosystems will likely try to shift further inland, away from the salty seas. Their movement will be met with resistance, however, in the form of human development such as houses, roadways and dams.

The result of moving organisms and shifting ecosystems with no where to go is a process called “coastal squeeze.” As an organism’s habitat is reduced, its population declines, explained Burkett, hurting people, such as fishermen, whose livelihood depends on brackish water ecosystems.

The effect of salinization on marine ecosystems, either from climate change or due to natural processes, has already been seen in some coastal areas. Burkett mentioned entire groves comprised of Florida sable palms and Louisiana ball cyprus became “ghost forests”— areas that were once covered with trees now awash in salty water and dead wood. Salinity levels not only affect animals and plants, argued Sujay, but also disrupts natural processes, such as denitrification, which maintain the quality of freshwater.

As saltwater pushes inward, it will mix with freshwater, which can cause problems, such as water shortages. “It’s the water resources that are key – whether it’s estuaries, streams, or water wells,” said Burkett of the geological survey.

According to Burkett, sea water rise will not be as big of an issue for bluff-lined cliff coasts, such as the U.S. boundary on the Pacific, but will come into play in low-lying areas like the Atlantic shore between Florida and Boston, which don’t have natural barriers or height to protect them from incoming water.

Robert Nicholls, another lead author on the United Nations report and a professor of coastal engineering at the University of Southampton in England, argues that salinization is a complex problem involving not only climate change, but human land use both on the coasts and inland, where dams upriver can affect freshwater runoff to coastal areas.

Salinity will become a bigger issue as it affects more freshwater, he said. But for now its impact is subtler than some of the other symptoms of global warming. “Climate change means a lot of different things: flooding, erosion, ecosystem change, and salinization are the four big effects,” he explained. “[Salinity] is just one of the things to worry about.”

One of the major contributors not cited by these reports to saltwater intrusion into coastal fresh water sources is the unrelenting dredging being done along our coastlines. The ever deeper and unnatural, canyon-like navigational channels being dredged to accommodate massive container ships are driving salt water far inland. This dredging is even breaking into coastal aquifer containment layers directly polluting these sources. Even smaller inlet are now dredged deeper for ever larger recreational craft. This dredging, along with offshore sand mining, are the major manmade causes of coastal erosion which, in turn, further threatens our coastal water supplies. Unfortunately, much of this activity is based on greed, not need. We must design our vessels to our environments, maybe even building offshore ports as transfer facilities for smaller coastal vessels (back to the future). We must also adopt more sustainable, environmentally sound methods of mitigating the damage done by this dredging to protect our coastlines (beach nourishment is, in reality, a starvation diet).

Sustainable Shorelines is a nonprofit corporation dedicated to documenting current environmental events on our shorelines, identifying and seeking to change those coastal policies and practices which are harmful and advocating protecting our coastal habitats and the ecosystems these support with methods proven to be environmentally sound and sustainable.