How a remote ‘doomsday’ vault is preserving the planet’s seeds. 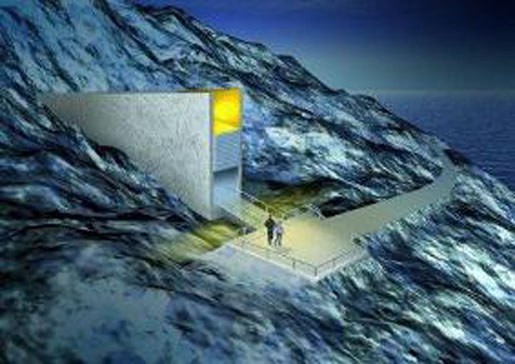 Dire predictions of agricultural destruction because of global warming are focusing attention on a “doomsday” seed vault near the North Pole, the construction of which is supposed to start in August.

Agricultural seeds from around the world will be kept safely in the Svalbard International Seed Vault in Norway just in case catastrophic events, such as rapid climate change, wipe out species of crops.

“The goal is to conserve the most important natural resource on earth,” said Cary Fowler, Executive Director of the Global Crop Diversity Trust, an Italian organization that helped establish the seed vault, which will be located in a mountain cave on remote Spitsbergen Island, above the Arctic Circle. “It is a backup system for seed collections that are lost.” Other organizations banding together with Diversity Trust are The Nordic Gene Bank and the Norwegian Ministry of Foreign Affairs.

Construction is set to begin in August on the $5 million mountain hide-away, which will serve as a supplement to the 1,400 smaller seed banks around the globe. Virtually every country in the world is planning to participate in the project, though organizers expect problems collecting seeds from countries with weak infrastructures. They also face the challenge of preserving crops that do not grow from seeds.

The plan for the seed vault is to replenish seeds that are damaged, such as by global warming. The impact of a warming globe on agriculture is varied, according the United Nations’ Intergovernmental Panel on Climate Change. The report predicts crop production in North America will increase from 5 to 20 percent at first; but afterwards weather extremes like drought and precipitation would ultimately hurt crop production.

In developing regions, the forecasts are clearer – and starker. In some northern and central African countries, crop production will be cut in half by 2020, the U.N. panel predicts.

With fewer agricultural yields there will be less crop diversity. Fewer species of crops will be available to evolve with the changing environment. “If you lose diversity all bets are off,” said Fowler. “The raw material of evolution is diversity.”

The vault should help preserve crop varieties, and also protect seeds from extreme conditions other than climate change. If a country faces storms, drought, disease or war, the stores at the vault can be used to replenish any destroyed seeds. “The vault will help with food security and poverty alleviation. What else is so positive and long term, and so beneficial to the world?” asked Fowler.

The vault – hidden inside a frozen mountain and only connected to the outside world through a 400-foot long tunnel – will be able to house 3 million seeds, almost double the amount that are thought to exist currently.

The mountain was chosen as the storage sight because it stays “naturally and uniformly cold all year round,” at roughly 20 degrees Fahrenheit, according to Fowler. The vault’s permanent staff will be a mechanical system, which will take over in keeping the cave cool if its temperature naturally increases.

It is also an ideal location because of its isolation, explained Grethe Evjen, a senior advisor to the Norwegian Ministry of Agriculture and Food. “It is a safe place” for protecting seeds, she said.

Some researchers are worried about the amount of time seeds will sit in the vault. “The main concern I have is that seeds can’t be preserved forever. There needs to be some mechanism every couple years to replace them,” said Charles Brummer, a professor of agriculture at the University of Georgia.

Manjit Misra, director of the Seed Science Center at Iowa State University doesn’t see germination as a problem. “We find seeds that are thousands of years old from the Pharaohs in Egypt that will germinate. Temperature and humidity make the difference.” He added, “the seeds can be held in storage for hundreds of years easily and they will still germinate.”

Fowler’s hope for the seeds longevity is positive, though not quite so ambitious. “Nothing lives forever, even in the best conditions,” he said, before pointing out that rice and wheat “survive happily for over 20 years.” As seeds need to be replaced, the smaller agricultural banks will send more to the vault.

As far as seed collection goes, due to poor infrastructure, procuring seeds from developing countries will be challenging, explained Misra. The organizers of the vault will work with local officials to convince them of the importance of saving seeds. And to help developing countries, Global Crop Diversity Trust has set up a fund to pay for seed shipments to Norway.

Fowler at Diversity Trust is also looking to preserve non-seed crops, such as sweet potatoes and yams, or bananas – which propagate through tubers and rhizomes respectively. At the moment, however, their main focus is acquiring as many seeds as they can come August. “For crops that are seed producing [the seed vault] is an important step,” said Fowler.

This is a great project. I hope it is very successful.

I wonder what they are going to do about seeds that are invasive or illegal in certain jurisdictions.