Climate changes are pushing rain forests to the point of no return. 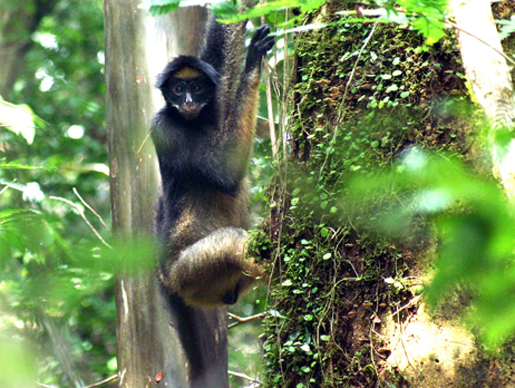 A spider monkey in the Amazon. [CREDIT: ANTHONY DI FIORE]

It is stunning to think that the Amazon – a humid land of frogs, anacondas and parasitic strangler figs – could disappear in this century. Environmentalists have been predicting dire consequences for the rain forest for years, but a new report from the United Nation’s Intergovernmental Panel on Climate Change finds that the Amazon could be on an irreversible course to extinction. Some researchers add to the report’s predictions saying the conservative climate models used in the IPCC’s projections underestimate regional drying.

Two big scenarios threaten the Amazon and the life it contains, and both have human activity at the root. One is forest die-back caused by human land use, including logging and smoke released by fires, says Daniel Nepstad, an ecologist at the Woods Hole Research Center in Massachusetts. The other is an overall warming of the Amazon climate, which most researchers attribute to human activity.

“By the time we get to 2025, 2030, at least half of the Amazon Basin will be cleared, compromised because of severe drought and associated fire, or logged,” Nepstad adds.

The IPCC’s report predicts that by 2050, parts of the Amazon will be completely decimated. The report also emphasizes a high likelihood of extinctions and significant biodiversity loss associated with the change of landscape. In fact, according to the IPCC’s projections, global warming alone could lead to the extinction of between 20 and 30 percent of the world’s plants and animals–many of which reside in the Amazon–by the end of this century.

The IPCC used a combination of several different computer models to make predictions about the fate of the Amazon. But a number of researchers claim that the report underestimates the speed with which the rain forest will be destroyed and argue that the panel should have relied more on a specific model, the Hadley Centre Climate Model, for making projections about the Amazon Basin.

“Not all models are equal,” says Philip Fearnside of the National Institute for Research in the Amazon. “If you’re talking about the Amazon, you need to look at the Hadley model.”

The Hadley Model focuses on what ecologists already see happening across the Amazon: droughts. The most recent drought was in 2005, and this model predicts that global warming will increase drought frequency as the current pattern of ocean circulation in the North Atlantic weakens and warmer sea-surface temperatures move southward. In short, the Hadley projections have “climate locking into a permanent El Niño,” explains Fearnside. Under those conditions, “the Amazon becomes much dryer and the temperature goes way up, and Amazon forest is basically wiped out by 2080.”

The situation is likely to be even more dire, because climate models don’t account for the impact of other human activities on the rain forest. Each year, the Amazon is being further sliced and fragmented by new roads and cleared for large-scale cattle and soy production, which is eliminating the habitats of hundreds of thousands of plants and animals. Both commercial and illegal logging further exacerbate the drying process, because removing trees reduces the amount of moisture released into the air, which reduces rainfall. And the fires used to clear forest for agriculture inhibit normal cloud formation, creating a feedback loop that results in further climatic change.

“Deforestation is not only destroying the forest directly, it is also contributing to climate change,” says ecologist Fearnside.

Decimation of the Amazon basin isn’t a local problem; the global population will be affected. “Climate changes poses risks to human society as well because we and the biological systems that we depend upon are so tightly adapted to our current climate,” says Paul Higgins, a senior policy fellow at the American Meteorological Society. Some think that the solution is also global: wealthy nations could purchase carbon shares from Brazil or pay countries like Ecuador to halt oil development. But these plans require immediate action. Once the Amazon rainforest and the plant and animal species that call it home are gone, there’s no going back. The drying out process, just like species extinction, is irreversible.

Why does this article bother to fluff up its claims with IPCC predictions about droughts? While, it might seem like a good idea to throw more fuel on the fire to intensify concerns about the destruction of the rain forest, it really contributes nothing. If droughts occur in the future, the ability of the rain forest to respond to such events will be determined by the general state of the ecosystem.

It’s chainsaws not climate that threatens the Amazon. And the response to this needs to focus on human activities and how they can be modified to be consistent with good long term management rather than the current short term focus which is pretty much slash and burn and forget.

The Amazon rain forest is a unique ecosystem and it would be tragic if we cannot preserve it.

To underline the previous comment by GMF, not only would it be tragic if we cannot save the Amazon rainforest, it will likely be fatal for humanity. The Amazon plays such an important role in moderating the world’s climate, its loss will likely make the world uninhabitable.

Our Mother is dying,
she is crying,
vermin are violating her,
stripping and burning
and sucking her juices dry.
Our Mother is fevered,
her lungs palsied,
her blood poisoned,
she must purge
the evil parasites,
she must rest.

We were all taught the Water Cycle when we were about 11 yrs old.

Deforestation to make grassland for cattle grazing and grow soy for cattle feed – both due to meat consumption. Go meatless and save the Amazon!

Ecuador asked for financial incentives to protect its own part of the Amazon. Good idea. Let’s make it economically rewarding in the short term for these poor cash-strapped countries to protect their share of the earth’s lungs.

It’s going to take more than words to resolve this problem.

What can really change us humans, the main pests on this planet?
Our greed seems to be the cause of all evil and rain forest will be gone, there is no doubt about it.
Solution: a dramatic international joined action in terms of changing current ways on forests preservation, not only in Amazon but in every corner of this planet. Trees must be planted on every possible clear spot. We all must take the responsibility and plant trees wherever we can. Municipalities must take immidiate action and plant trees along river banks and in every possible spot where tree can grow.
and of course change the obsolete technology with cleaner ways of burning fosil fuels.
Will it be done this way?? I doubt it.

I agree w/ GMF-man is and has been raping Mother Earth,unnecessarily.Native Americans honor nature,took only what they needed to survive,with respect and great reverence for all life and future life. Why do you think they were pushed aside?No $$`s in it. I also believe g-warming is a hyped tool of manipulation,fear-mongoring for profit,further control our actions.If we lose our plankton(which provides majority of our oxygen,not trees) well…that does scare me.
It`s the oceans that are warming,not the globe.Due to undersea volcanism-not to mention our sun which directly drives our climate.Their heat is melting perimeters of ice,not the core.
Oceanlife and our coral reefs are already disappearing,dying,sickened.Waters are too warm,
and cause of all these floods from torrential rains,worldwide.More heat= more evaporation=more precipitation.I call it ‘global-extreming’ as there is record snow,ice,hail,rain,as well as extreme heat/drought.Man is responsible for harming nature but certainly not for their phrase “global-warming”.Their are cosmic forces occurring,all the planets are experiencing changes,which we have no control over.Please shed their ‘guilt-trip’ and realize what is going on is either cyclical,precursor to a new ice age,or something God only knows.Our sun is not in a normal mode and it`s flares are to be 50% worse during it`s cycle #24 approaching 2012.I am reminded of what the Mayans imply and the Hopi`s repeated warnings,man will have to go underground in the future.Instead of worrying about what lightbulb to use,we should be demanding the truth.I`m sure TPTB know.They have underground cities to crawl into.We deserve the truth,half a chance to survive,the knowledge to prepare.Some state a pole shift is imminent,the globe is actually cooling,glaciers are also growing worldwide(true+unreported) and/or it`s a natural cycle. Maybe Revelations is just simply playing out? I beleive in protecting our natural resources,habitats,etc.but I will not be their unwitting peon,flapping in the wind due to obvious propaganda.Their usual tactics to maintain ‘control of the masses’ and limit or hide TRUE knowledge,should be crystal clear to most,by now.Look how far they`ve progressed,how
much we are deprived of and losing.

The Amazon forest is the heart and lungs of planet earth. We lose it at our peril.

All these comments are fine, but nobody is doing anything. Government is not going to fix the problem. Individuals are going to have to fix it. It’s going to take more than words.

“I well know, O Jehovah, that to earthling man his way does not belong. It does not belong to man who is walking even to direct his step.” Jeremiah 10:23

http://www.ecologyfund.com has daily buttons that can be clicked to save rainforests. They donate 500ft^2 upon signing up (free and quick) and 2000ft^2 if you send e-mails to 20 people to join (or 100ft^2 per person). Corporate sponsor ads fund this so businesses can go green by putting up ads here.

Also, there is a search engine (ask.com search technology) at http://www.everyclick.com that donates two cents per search to a charity of your choice. A quick search reveals “Rainforest Concern” as an appropriate charity:
Rainforest Concern was established in 1993 to purchase and protect threatened tropical rainforest rich in bio-diversity.