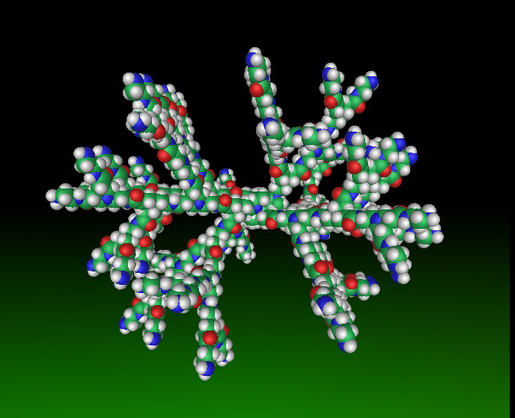 Steve Isaacman is building things in the lab—floppy, tennis-ball-looking things. They are considered by some to be the future of bioimaging, a field where tiny compounds are sent into the bloodstream, allowing physicians to “see” a specific malady.

One of the ways researchers can see into the body is with magnetic resonance imaging, or MRI, a visualization tool used to home in on a blood clot, identify a broken bone, or spot cancer—the disease Isaacman is most interested in.

But as it stands, current methods for visualizing ailments within the body have much to be desired, says James Canary, head of the chemistry lab where Isaacman is stirring three flasks full of what looks like pomegranate juice. Canary says “targeted contrast agents” that will distinguish between different maladies within the body – such as different types of cancer – and do so at a finer level are needed to improve this area of medicine.

Contrast agents help distinguish a healthy area of the body from a broken one. In the case of cancer, imaging agents could be made not only to find specific types of cancer – aiding doctors with tumor identification – but also to carry precise, cancer-killing drugs directly to a cell cluster. On top of that, there is hope of one day making imaging agents that would be visible to the naked eye. Canary thinks the way to perform these multiple tasks is with dendrimers—the aforementioned floppy, tennis balls.

Dendrimers are on the nanometer scale. To get an idea about how small that is, consider that a human hair is only about 50 nanometers wide. Canary describes dendrimers as “nanoparticle scaffolding” because they have a spherical core with spindly branches extending from their surface. Isaacman is working to attach gadolinium ions, a magnetic metal used as a contrast agent, to these branches. When gadolinium is sent into the bloodstream, it gives bright images wherever the blood flows easily, as is the case with tumors.

However, the gadolinium method is inherently insensitive, says Isaacman. The signal is weak, so a lot must be present in one location to make it visible to an MRI machine. Seeing as it’s hard to get so many of these ions packed into tiny spaces, doctors cannot locate tumors smaller than one billion cells—about the size of a pea. “We can do better than that,” Isaacman states, musing that maybe one day researchers will be able to see tumors 100 times smaller. Canary’s lab hopes their dendrimers will help increase this detection system. The nanoparticle’s intricate network of branches allows them to deliver much more gadolinium than other carriers, making the signal much greater. In fact, the dendrimer branches provide so much storage scientists will have the option of attaching other cargo besides imaging ions.

When describing the compound, Canary balls one of his fists and waves the other hand around it like a sorcerer over a crystal ball. He’s gesturing to show how cancer-fighting medicines would surround and be attached to a center dendrimer sphere. Such a structure, he says, would allow physicians to attack the growth at the cellular level, thereby protecting healthy cells from caustic cancer treatments. Kent Kirshenbaum, one of Canary’s colleagues at NYU but who is not involved in the dendrimer research, believes that utilizing nanoparticles for bioimaging is revolutionizing the way chemists are doing science.

One of Canary’s favorite ways of using dendrimers is in combination with fluorescence. Fluorescent light, explains Canary, can be seen if the medium it is passing through is thin enough. Just like gadolinium ions, fluorescing agents could be attached to dendrimers and sent into the bloodstream. There, they would attach to tumor cells and emit a light so strong it shines through the skin – allowing scientists to identify the size and location of a tumor with the naked eye. This could be useful for diagnosis, as well as helping a surgeon visually separate cancer cells from healthy ones.

Canary admits that he gets a kick out of fluorescence. “As a research tool, you get a fast answer–poof!–find out if it worked or not,” he says, snapping his fingers. However, identification through the skin would only be possible if the cancerous clump was a few millimeters below the surface, as would be the case with cancers of the head and neck region. The lab is also exploring a two-pronged dendrimer attack system: the first compound is shot into the blood, where it alights and marks cancerous cells while its mate sweeps in to deliver a cancer-killing drug.

The NYU chemistry lab is not the only lab attempting to use nanoparticles to increase visualization techniques. A recent report on the New Scientist website described how Harvard researchers designed a new nanoparticle that can ferry drugs to tumors and also lights up upon delivery. Such discoveries prove the belief held in Canary’s lab that bioimaging with dendrimers is important, but also that Isaacman is right: “Bioimaging is sexy right now.”

Probably the best article on Bioimaging that I have ever read and trust me I have read quite a few in my day. The writer had me so intrigued about what these nanoparticles, strike that “floppy tennis balls” can do for Bioimaging! Bravo Ms. Webster. Bravo indeed!