More than a Print

Researchers think drug use can be detected in fingerprints. 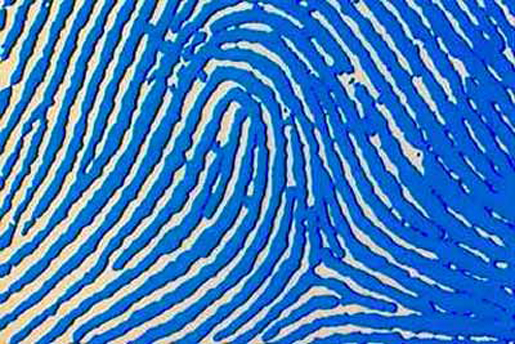 Close up image of a fingerprint. [Credit: Tom Harris].

A fingerprint found at a crime scene may soon provide more information than just the identity of a culprit or witness: researchers can now extract lifestyle details from the whorls and lines that would indicate if the person was a smoker or did drugs.

“When we ingest drugs, the body automatically metabolizes them,” explains David Russell, chemist and director of research at University of East Anglia, whose team is developing an “intelligent fingerprinting” method. The drugs are broken down into compounds, which are released in sweat: these compounds are a new element that researchers are looking for in fingerprints. The applications of such a technique range from narrowing down a list of suspects in a crime investigation, to illegal drug detection in athletes, to screening for diseases.

Whenever someone touches a surface with their fingers, they leave behind a latent print – an impression of the ridges on their fingertips. That impression contains sweat, oils from the skin and fatty acids. Russell and his team of British scientists are using the compounds left behind in sweat to establish drug use.

To do this, they attach chemical markers to gold nanoparticles, mix those with an illuminating dye, and splash the solution over the latent print. Each gold nanoparticle binds to a specific substance – if that substance is hidden in the print – causing the dye to illuminate that compound and enabling the researchers to ‘see’ the information contained in the print.

“We are aiming to produce a solution that can detect a range of substances and produce a different color for each, so it will be possible to look at a fingerprint and obtain a lifestyle profile from it,” Russell says in a press release.

Another team working on improved fingerprint detection and analysis methods is a group at the Asian Institute of Technology. Led by Joydeep Dutta, director of the Nanotechnology Center of Excellence in Thailand, the team is focusing on the fatty acids, or lipids, left behind in a latent print rather than sweat. “A lipid extract from a drug addict may give out a specific signal,” says Dutta. His team could then use nanoparticles to discover drug residue left behind in lipids.

Dutta’s approach with lipids has benefits over sweat analysis. When intelligent fingerprinting utilizes sweat, drug detection is dependent on a few different factors. Sue Jickells, a researcher at King’s College London who’s working with Russell, explains in an email that detection depends on the surface the print is deposited on, as well as the environment surrounding the surface. “If the prints are exposed to rain, water-soluble substances will be washed out of the prints,” writes Jickells.

This is why Dutta’s team is concentrating on lipids rather than sweat. “Since we’re using lipids, if we have a porous surface, we don’t have to worry about that,” he says.

Although the technique with sweat is promising, it does have further limitations. The procedure’s sensitivity to chemical detection has yet to be established. “If someone had just washed their hands and dried them and then touched a surface, I anticipate that they wouldn’t deposit much material for the process to detect,” describes Jickells. On the other hand, Jickells warns, you also don’t want the method to be so sensitive that it will detect substances transferred from handshakes.

There is still work to do before intelligent fingerprinting is perfected and implemented into ‘real life.’ Currently, Russell’s team is working on methods to detect multiple drugs with a single test and proving to police that intelligent fingerprinting works for the narcotics they’re interested in detecting. “How quickly could this be implemented?” reflects Russell, “That’s just down to money. The answer is, pretty quickly.”

That’s it…i’m not touching anything ever again without rubber gloves ;-)