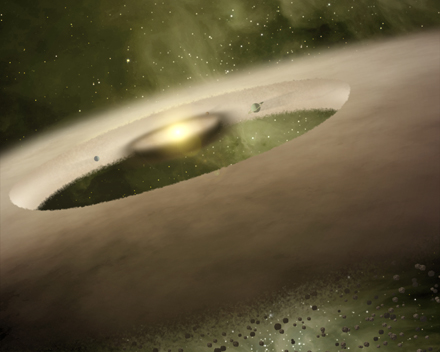 It’s another one of those astronomical phenomena that makes one yearn for a stint as a galaxy-trotting super-being. In a press release, NASA highlights a young star that scientists suspect is surrounded by two ‘donuts’ of gas and dust, with a fresh planet or two gravitationally carving out a gap between the massive rings. The solar system is only a million years old, making it the youngest on record.

The planets there “are still forming, which means they are bumping into rocks and spraying dust everywhere,” explains Whitney Clavin, press officer at Jet Propulsion Laboratory in California for the infrared Spitzer satellite that collected the images. “This type of violent, constantly changing environment is not a good place for life to take root.” So it’s very unlikely that anyone is actually there yet to experience the uniqueness of this bizarre stellar neighborhood.

But if one were to gaze out into the cosmos from the surface of a planetoid orbiting betwixt the double-torus . . . what a view it would be. The sun would be perpetually shrouded in the smog of the interplanetary dust of the first ring. The second outer circle of debris, swarming about as far out as Pluto, would interrupt the star field at night. If illuminated by the fledging star, this donut might glow in a dusky band stretching across the sky – instead of a distant Milky Way, might you have a proximate Dusty Way? If the light from the star (or from the backdrop of the universe) were too faint, though, a portion of the nighttime sky would appear as just a blacked-out, impenetrable void . . . but only for a few more million years.

For more on distant and bizarre solar systems check out Monica Heger’s story on Earth-like planets with two suns.

Let’s go! I will build the spaceship if you pack the chips and salsa.

Kinda makes global warming seem like a walk in the park doesn’t it? Can you say upper respiratory disease?